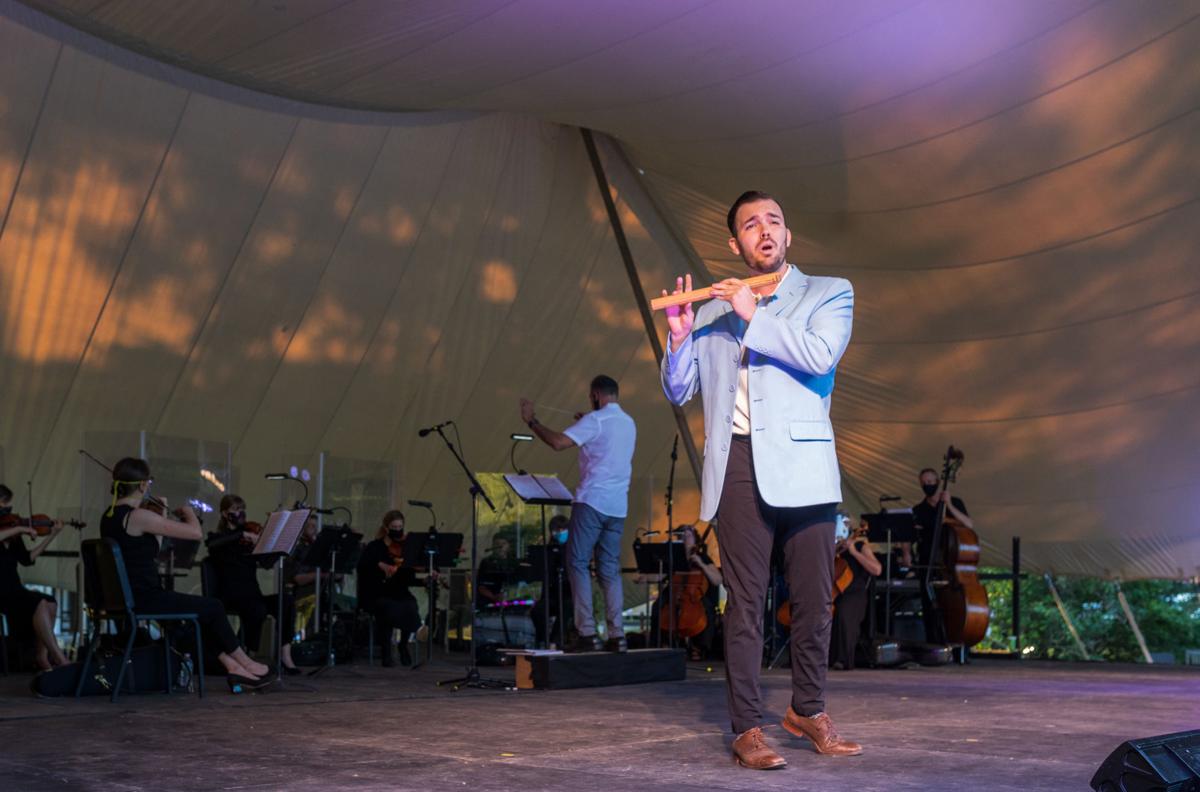 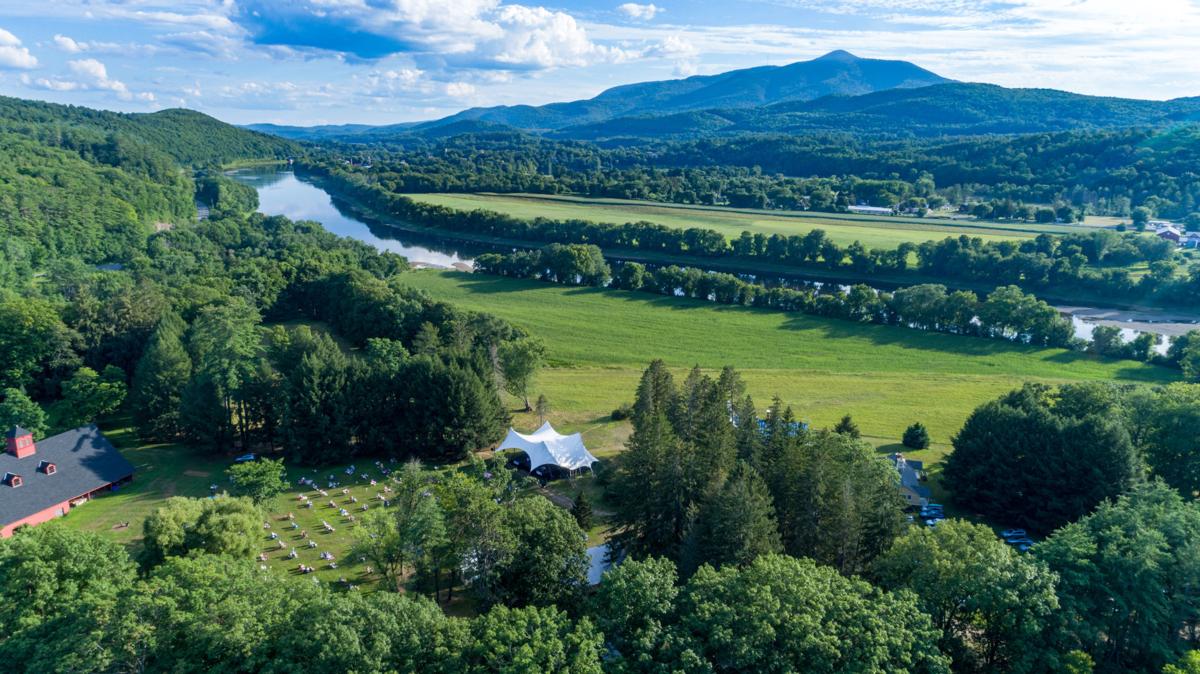 Opera North is presenting its Summerfest 2021 at the Blow-Me-Down Farm, part of the Saint-Gaudens National Historic Park, in Cornish, N.H. 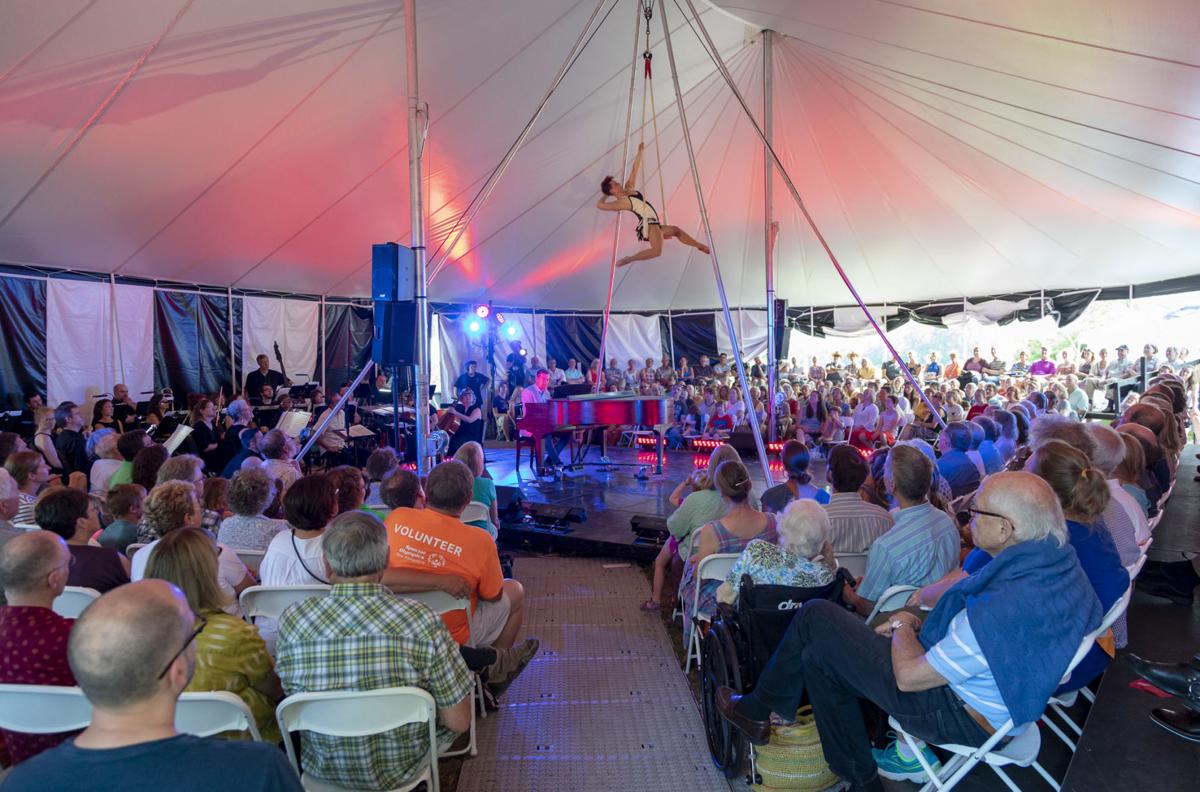 This year, circus artists return to join the Resident Artists in the circus tent at Opera North’s Summerfest 2021. 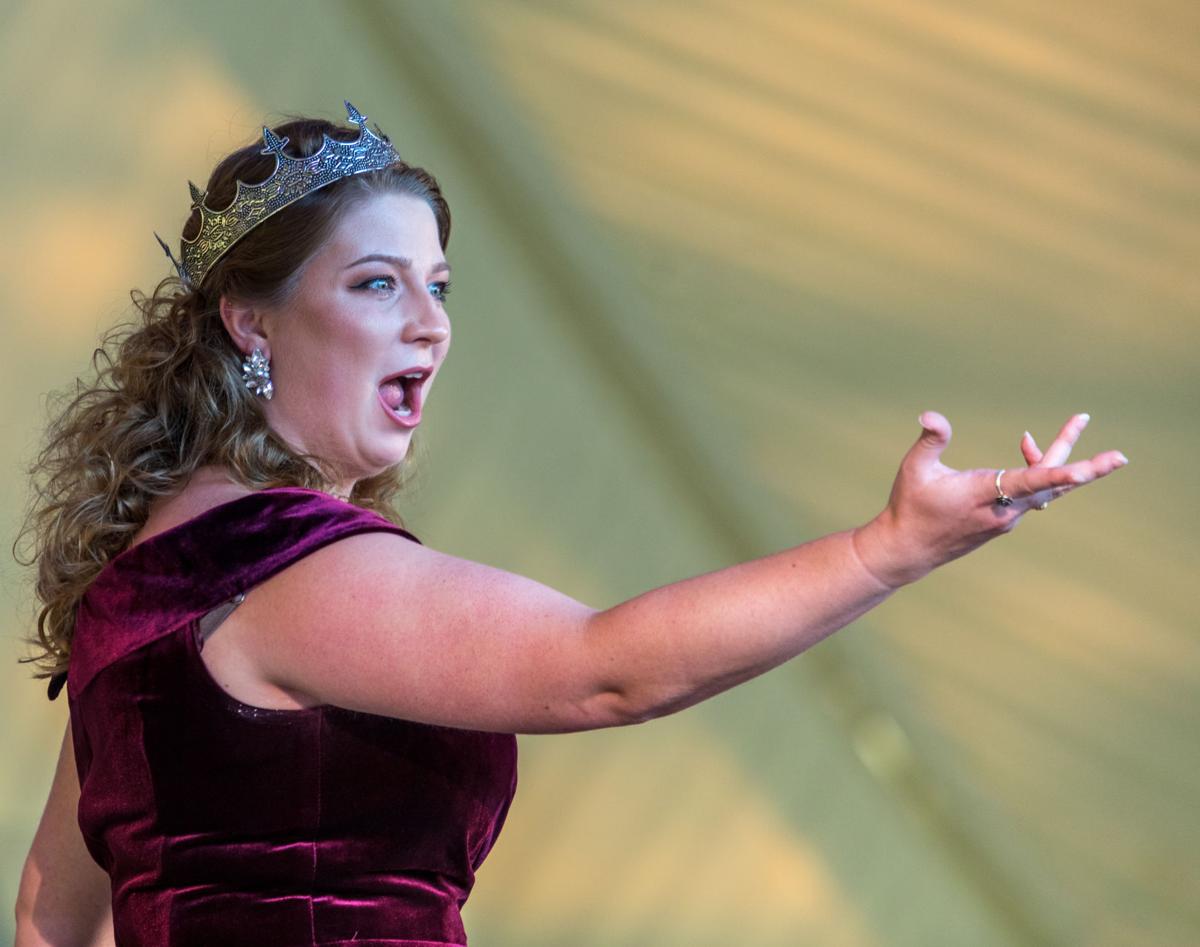 Soprano Krista Renee Pape was the fiery Queen of the Night in Opera North’s outdoor production of Mozart’s “The Magic Flute” last year at Blow-Me-Down Farm. 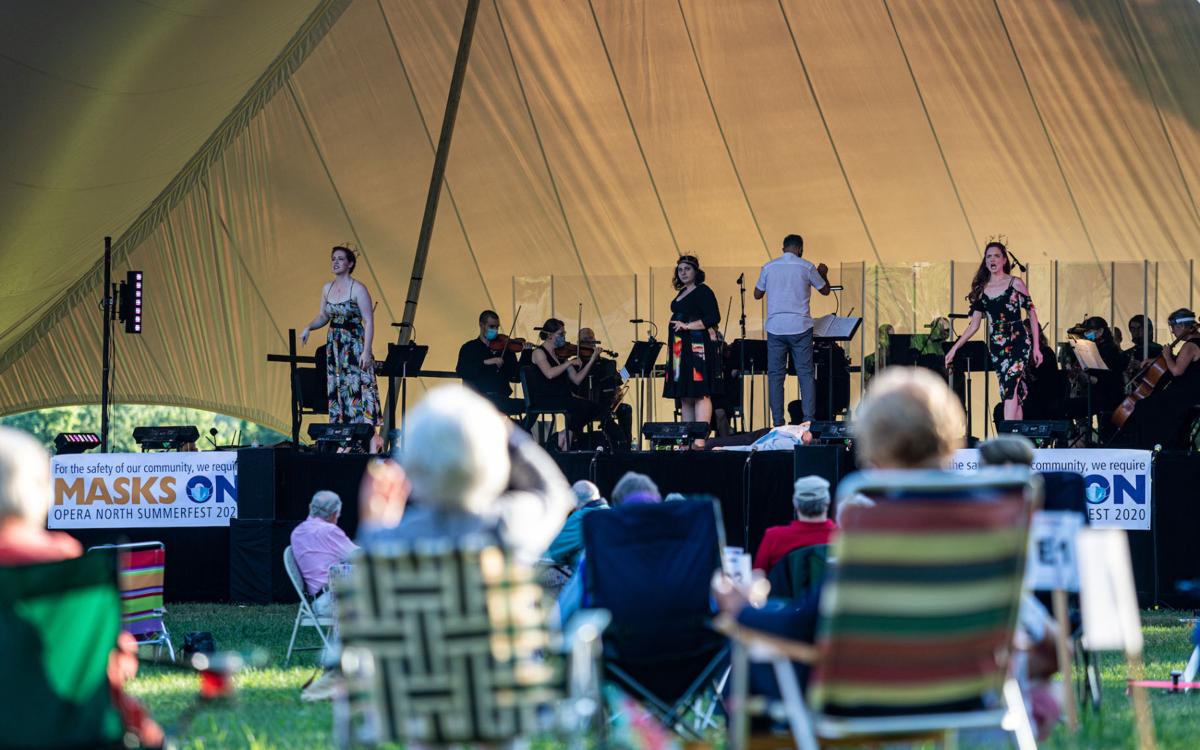 At Opera North’s 2020 production of Mozart’s “Magic Flute,” the orchestra and conductor were behind the singers. 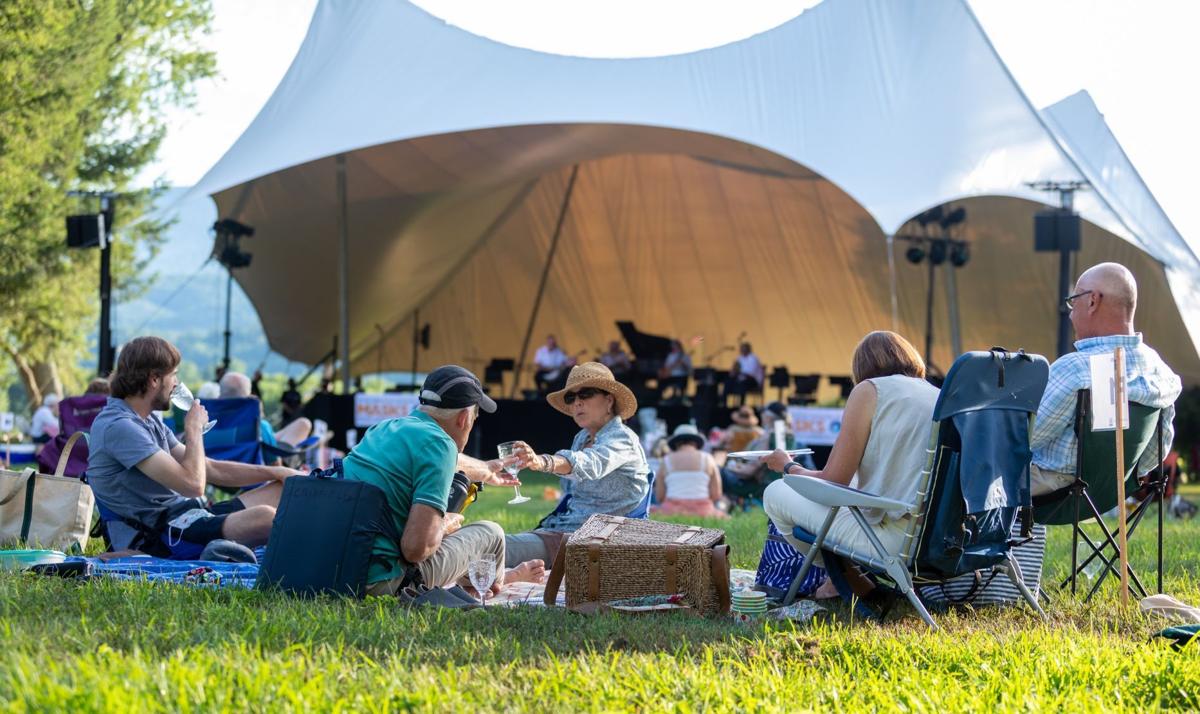 Audience members at Opera North’s Summerfest 2020 enjoy themselves on the lawns of the Blow-Me-Down Farm.

Opera North is presenting its Summerfest 2021 at the Blow-Me-Down Farm, part of the Saint-Gaudens National Historic Park, in Cornish, N.H.

This year, circus artists return to join the Resident Artists in the circus tent at Opera North’s Summerfest 2021.

Soprano Krista Renee Pape was the fiery Queen of the Night in Opera North’s outdoor production of Mozart’s “The Magic Flute” last year at Blow-Me-Down Farm.

At Opera North’s 2020 production of Mozart’s “Magic Flute,” the orchestra and conductor were behind the singers.

Audience members at Opera North’s Summerfest 2020 enjoy themselves on the lawns of the Blow-Me-Down Farm.

Last summer, Opera North presented an outdoor production of Mozart’s “Magic Flute” — 24-piece orchestra, modest staging and all — at Blow-Me-Down Farm in Cornish, New Hampshire. It was the only professional opera production of the summer in the United States, and all performances will filled to the max.

“La Bohème,” Puccini’s beloved tale of tragic young lovers, will headline this year’s Summerfest 2021 with three outdoor performances at Blow-Me-Down Farm. Completing the season will be “Havana Nights!” bringing together high-flying circus artistry and vocal virtuosity for three performances; and “Extraordinary Women,” celebrating Baroque opera heroines while showcasing the company’s resident artists, for one night only.

Blow-Me-Down Farm, the historic farm that is part of the Saint-Gaudens National Historic Park, is Opera North’s new home. A new “park for the arts” is being created by the opera company in partnership with the National Park Service, against the dramatic backdrop of Mount Ascutney and the winding Connecticut River.

“We know that things are going to be better — there is a vaccine, but there still are a lot of questions,” Haile said of the COVID-19 situation. So we made the decision that we wanted to do a full season, meaning a good representation of what we normally do, but it’ll be a little bit truncated this summer.”

“La Bohème” or “The Bohemian” was no random choice as it is one of the most popular operas of all time. The poet Rodolfo meets and falls in love with the seamstress Mimi, only to find it doomed by his jealousy and her health.

Fortunately, like Mozart’s “Magic Flute,” it lends itself to cutting without losing sense of its plot. For example, Louis Burkot, Opera North’s artistic director, plans to remove the beginning of Act Two.

“My second act will start after the whole hubbub at the Café Momus, beginning when the principals arrive for dinner,” Burkot said, “then a very shortened version of the second act at the end when they see the parade, just a short flavor of it sung by the principals.”

Burkot plans to cut the beginning of Act Three, where Mimi comes, finds the milkmaid and asks her where Marcello lives.

“So by doing that, that allows for one intermission, an hour and 30-minute production with a seven-member cast,” Burkot said.

Because of the pandemic, Burkot had the luxury of working with the Mozart cast for a long time online.

“When they got here, we almost knew more than we had in the past, when we were still testing the waters when they got here. We knew exactly what we were expecting from each other. And that was great.”

That will be the same with “La bohème.”

Another challenge is choosing the orchestration. The opera is scored for a full orchestra, and Burkot will have only about 24 players (like last year).

“There are a lot of people who have done orchestrations,” he said. “There’s one that is even smaller than the one that people normally use for a reduction, but I can’t get a recording of it. It’s done by somebody who was in the Covent Garden Orchestra, so I’m sure he knows what he’s doing.

“The reason I would use the smaller orchestra is because I’ve insisted that the orchestra be in front,” Burkot said. “I can’t do ‘Bohème’ with the singers behind me — it just won’t work.”

Opera North is hoping to use the circus tent of two years ago, but reverse the positions.

“The orchestra will be down in the front and the singers will be built way up behind, so everybody can see them and hear them,” Burkot said.

“We will have the sides open, so that there will be maximum airflow,” Haile said. “For our audience’s sake, there will be assigned seats, and we will have a certain amount of distancing in the tent.”

If COVID-19 numbers prevent people from congregating in the circus tent, the shell-like tent with the audience on the ground in front will be used.

“Havana!” Brings together topnotch circus artists alongside the Resident Artists performing favorites from Puccini, Bizet and Lecuona in a family-friendly mash-up of song and circus. However, the program hasn’t been agreed upon yet.

“We have Mark Lonergan the (circus) director, and we have Evans and myself, all three who have very specific ideas about what we think should be happening,” Burkot said. “By calling it ‘Havana!’ night, some of the program will be devoted to music that is either in that milieu or has some connection to it.”

“I need a balanced program for the singers, things that I think will work with the performers,” Burkot said. “Circus performers, even more than ballet, have very specific tempos they can do these things. They’re ultrasensitive to tempo.”

“We’re working out the details of what we will present, but we’ll come up with a lovely program,” Burkot said, “and there will be references to all things Cuban.”

“Extraordinary Women” was first planned for last season at Dartmouth College’s Hood Museum in Hanover, New Hampshire. This collection of Baroque opera heroines was to showcase Opera North’s nine Resident Artists in selections from operas by Purcell, Handel, Monteverdi and Gluck, presented in concert with semi-staging and small orchestra.

“I had structured it around the people coming that year, so I will have to modify it,” Burkot said. “There are so many heroines we could use, so depending on the mezzos and the two tenors that are not going to be in ‘‘Bohème,’ we’ll structure it around them. It’ll be an hour long, maybe 20-minute excerpts. I realized by doing ‘Bohème’ ‘only, that cut out a lot of singers.”

Opera North aims to bring back the full opera experience.

“Even though the festival will be only three weeks, there will be a lot in those three weeks,” Haile said. “And it will be a good major start at getting back to our normal schedule. At the same time, we’re taking into account everybody’s comfort and safety this summer.”

Tickets are $25 or $50, and go on sale in January. Gift certificates in denominations of $25, $50 and $100 available at: forms.gle/Nvzn1MD5oUECKEWE7 For more information, go online to operanorth.org