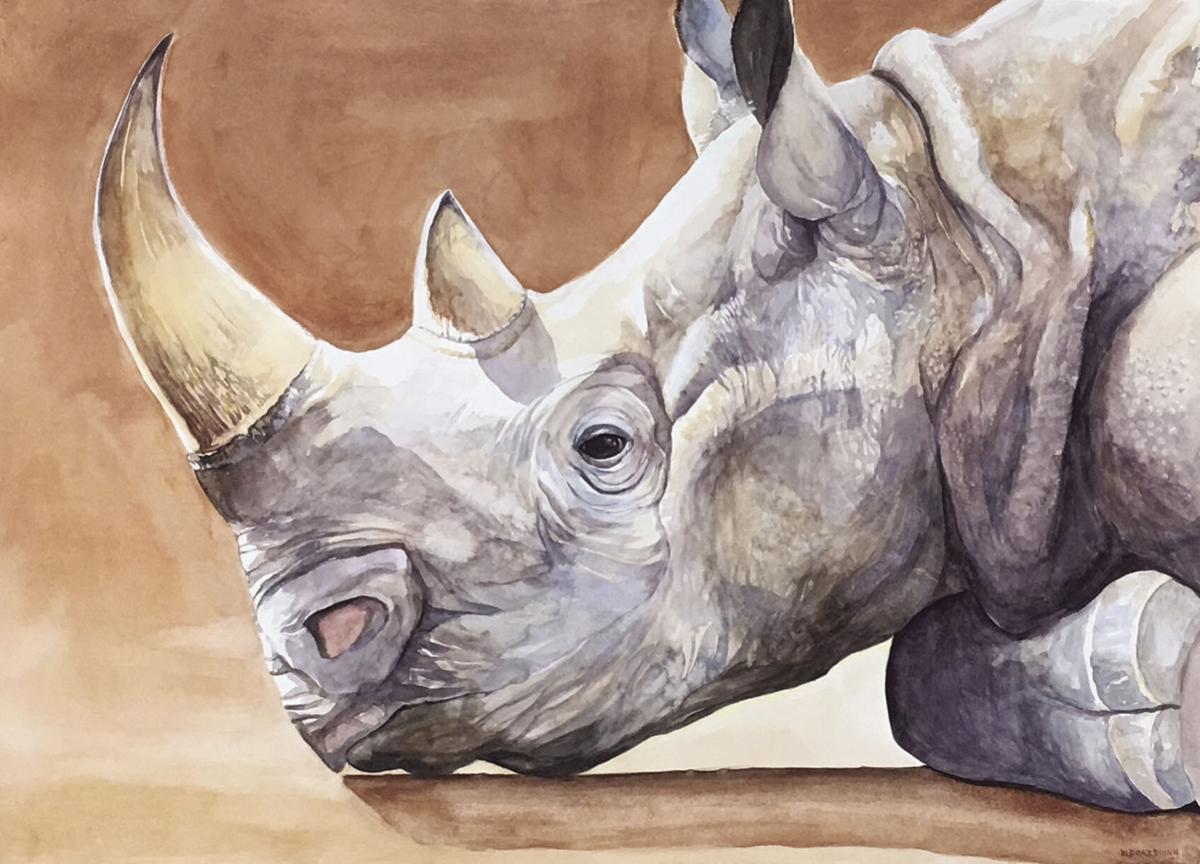 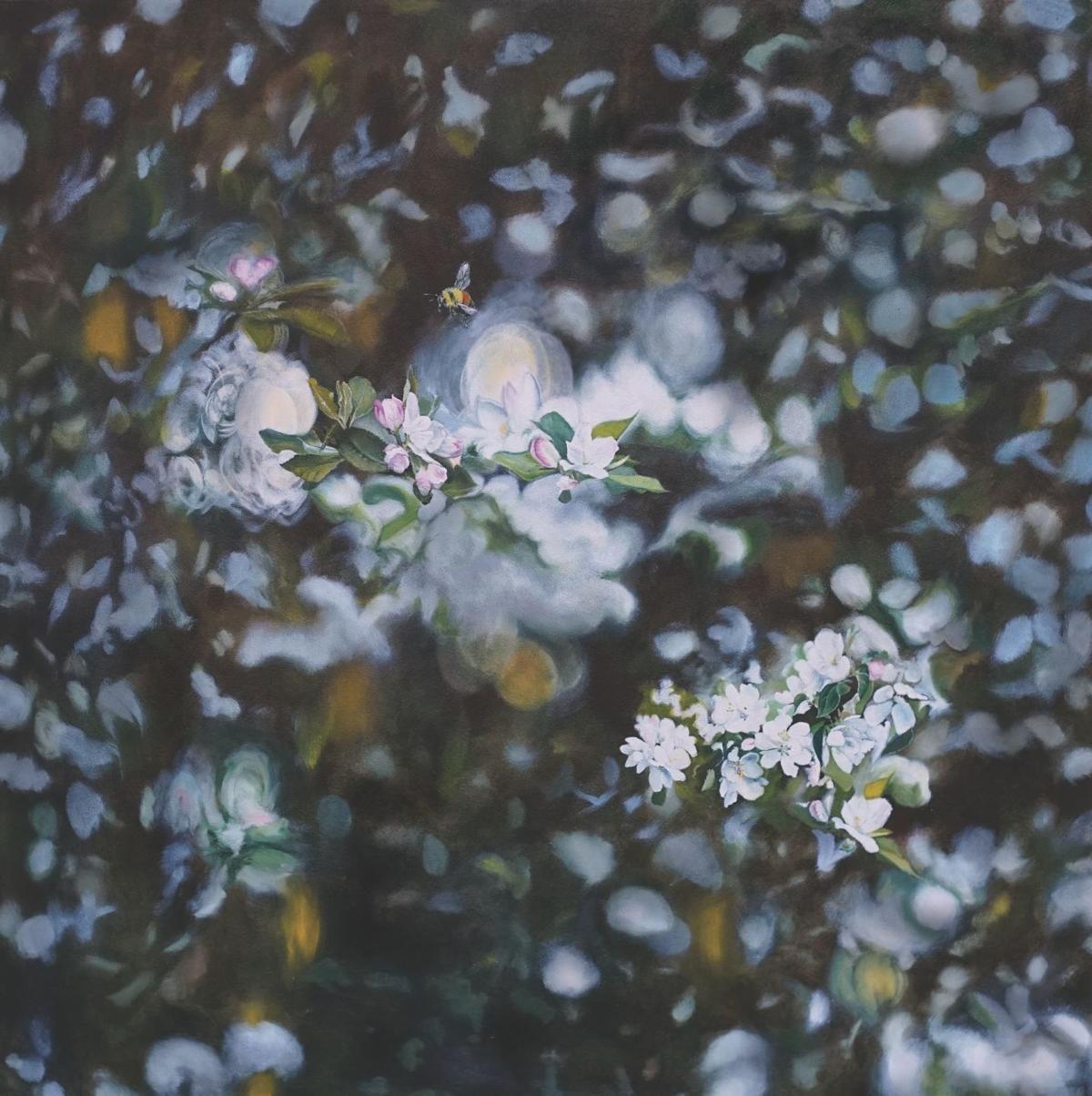 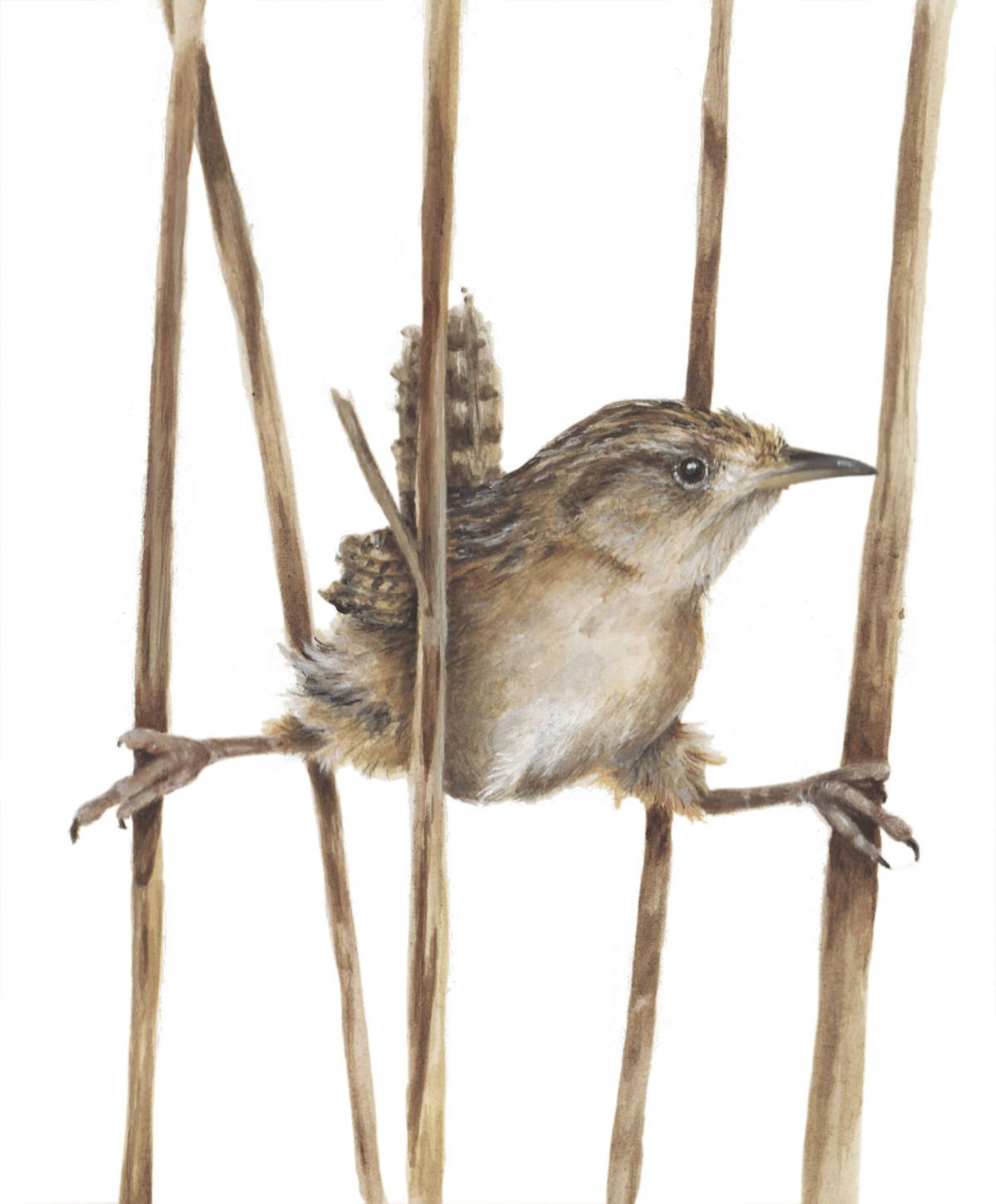 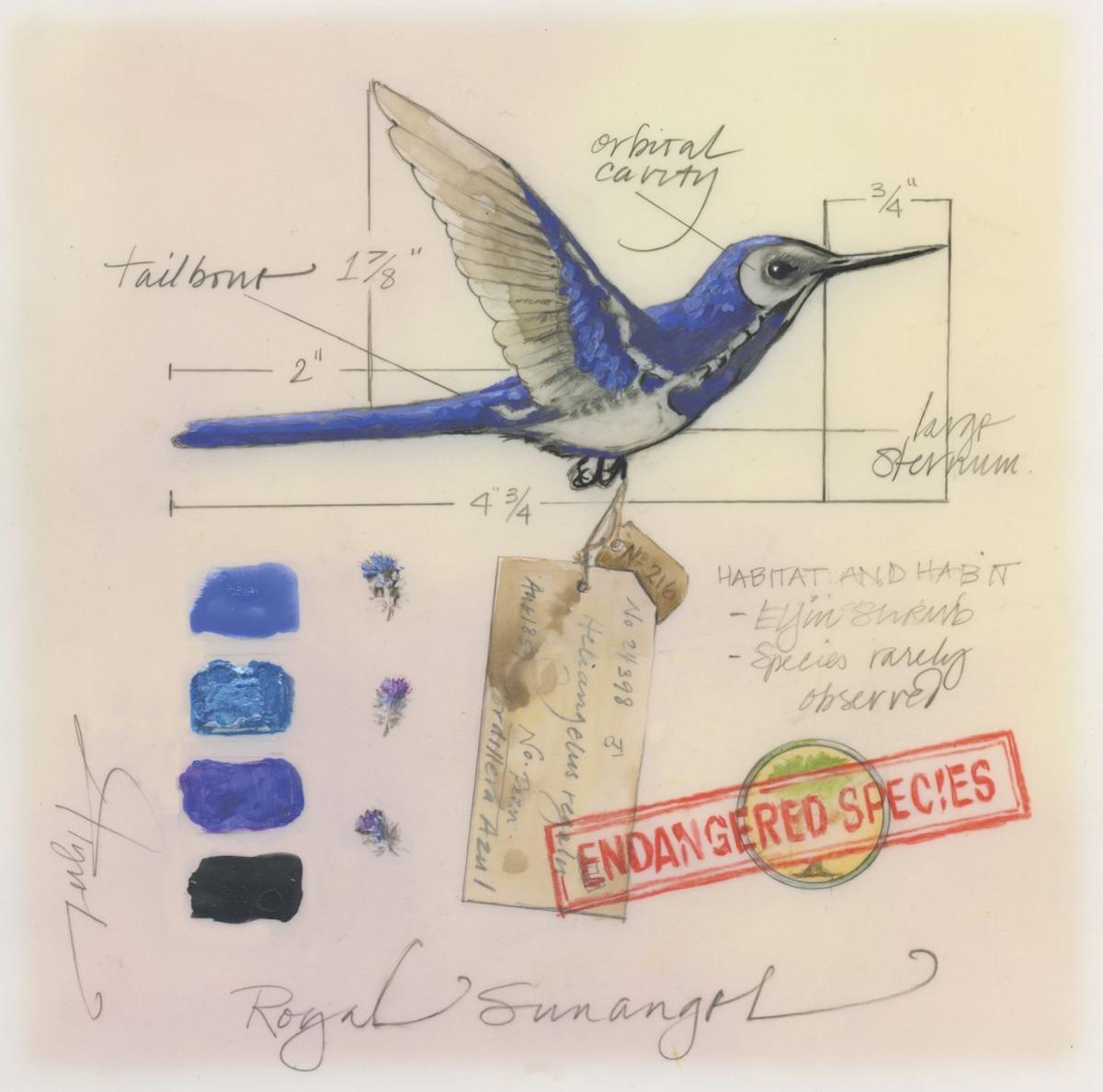 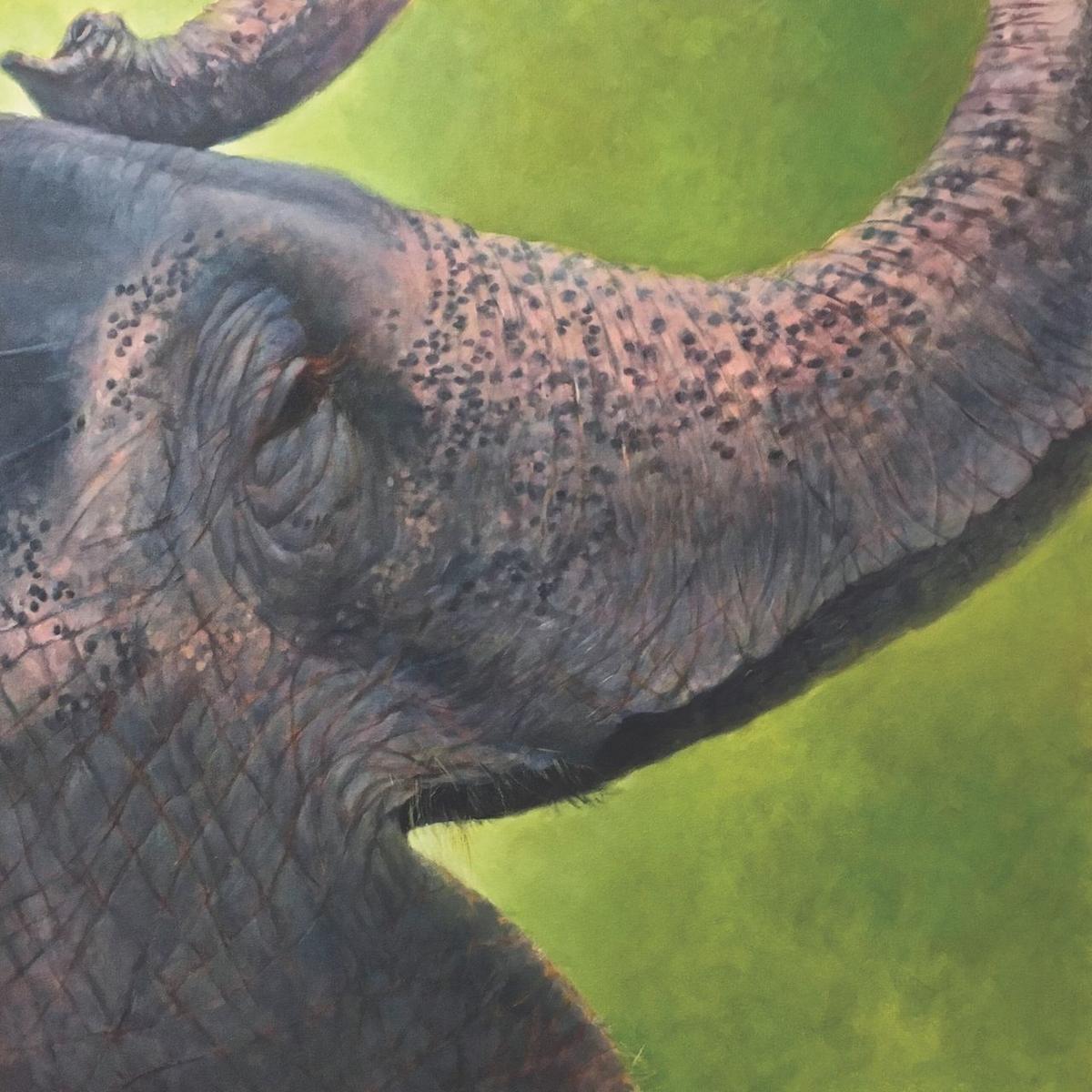 The tiny, rusty, patched bumblebee, Bombus affinis, with its translucent golden wings and distinctive reddish patch on its back, was once a common sight across the United States, pollinating blooms as it collected nectar. Nationally, its population has declined by 87% in the last two decades. It hasn’t been seen in Vermont since 1999.

The black rhinoceros, a massive grassland dwelling herbivore native to eastern and southern Africa, decreased from a population of about 65,000 in 1970 to only 2,300 in 1992. The black rhino has a distinctively formed prehensile upper lip, well suited to plucking fruit and leaves from its preferred shrubbery.

The rusty-patched bumblebee and black rhinoceros are both threatened species, identified as “Critically Endangered” on the International Union for Conservation of Nature (IUCN) Red List of Threatened Species.

At Highland Center for the Arts in Greensboro, viewers come face to face with both creatures in life-size paintings — Michael Boardman’s watercolor “Black rhinoceros” and three paintings of the bumblebee — Sharon Murphy’s acrylic “Rusty patched bumblebee” of life-size bee and enlargement of its beautifully structured wings, and Gabriel Tempesta’s two oil paintings of “Queen in Spring” of the matriarch at work amid apple blossoms.

Boardman, Murphy and Tempesta are among the eight Vermont and New England artists whose work is featured in the exhibition “A Critical Balance: Artists take Action” in The Gallery at Highland Center for the Arts. The exhibition features paintings of animals across animal kingdoms, from every continent, and of size from butterflies, dormice and skinks to reticulated giraffes, Sumatran elephants and North Atlantic right whales. Every one of these species is identified as threatened or extinct on IUCN’s Red List, a worldwide conservation status listing and ranking system.

“This is gorgeous work. It brings these animals to life and you really get a sense of what’s at stake,” said Keisha Luce, HCA executive director.

The exhibition catalogue notes scientists estimate that every day 150-200 species become extinct and that many familiar creatures are at a critical balance point.

These life-size portraits of specific individual creatures give viewers opportunities to look closely. The dexterous feet of the sedge wren, the vocal sac of the boreal chorus frog, the deep brown eyes of the mountain gorilla — these details offer insights of fragile lives and survival.

Along with taking viewers around the world, the show includes a section focused on Vermont as well. Currently, 54 animals are on the Vermont Threatened and Endangered Species list.

“Wildlife species are in a global crisis and at a critical balance. Many are holding on by a thread, soon to be lost to extinction if we don’t intercede. At a time when most people feel helpless and that they have no power to execute change, our goal is to remind the viewer that they do have a voice,” explained Linda Mirabile and Adelaide Murphy Tyrol artist/organizers of the exhibition in an email.

“Real action is needed now, starting with raising awareness and beginning the conversation. Our hope is that people will walk away from the exhibit with a new sense of urgency and will act on their own and with others to spread the word. There are many opportunities for involvement on the state, federal and global level,” they note.

The “Critical Balance” project began with a call to action around endangered species by artist Lark Upson around four years ago. This is its third exhibition on the theme and the second with this group of artists and its first time at HCA.

The artwork is accompanied by well-developed information about each species, explanations of IUCN classifications from Vulnerable to Extinct, notes on threats to different species, and even some encouraging success stories as conservation efforts help some of these animal populations to rebound.

Several of the painting labels have links for Augmented Reality Experience (AR) video of the animal in the wild. Watching the hawkbill sea turtle swim, a white-bellied pangolin roll into a ball, a northern rockhopper penguin hop adds to the awe and awareness of the fragility of these endangered creatures.

In normal times, “A Critical Balance” would likely draw many school groups. Along with these wonderful paintings, it offers curriculum tie-ins across grades. Now, HCA focuses on home school and remote learning experiences. Greensboro Library is developing educational kit to accompany the exhibition. HCA has activities and opportunities including programming with participating artists.

Highland Center for the Arts

The Highland Center for the Arts presents “A Critical Balance,” eight New England exhibit paintings of a selection of species that are listed as endangered, through Nov. 22, at The Gallery at Highland Center for the Arts, 2875 Hardwick St., Greensboro. Hours are (reservations, masks and distancing required): 11 a.m. to 4 p.m. Wednesday-Sunday, 10 a.m. to 8 p.m. Sunday; call 802-533-9075, or go online to highlandartsvt.org