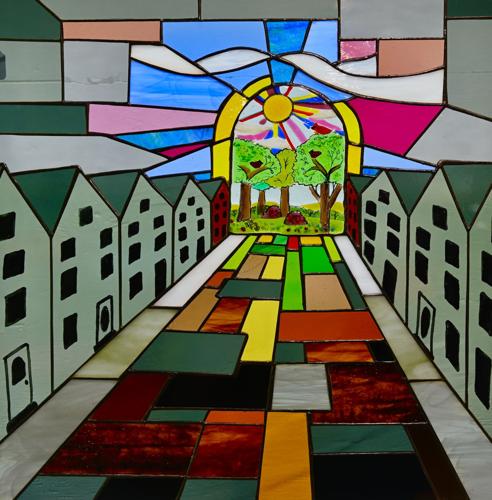 Karen Deets: “Back to Wonderland” 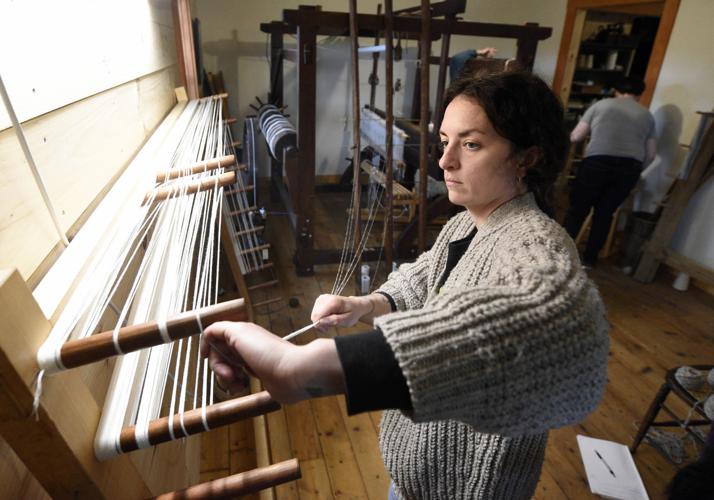 Becka Ranta, of Walden, makes a warp at the Marshfield School of Weaving. The school will participate in the 2022 Spring Open Studio Weekend. 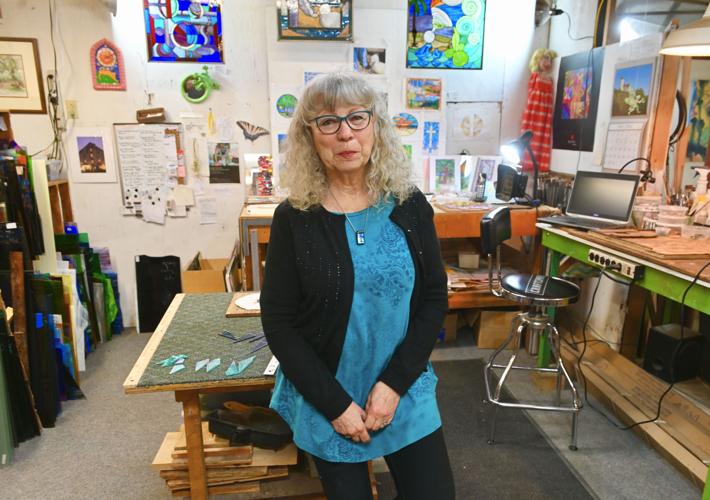 Stained-glass artist Karen Deets works in her studio in Fair Haven on Wednesday. 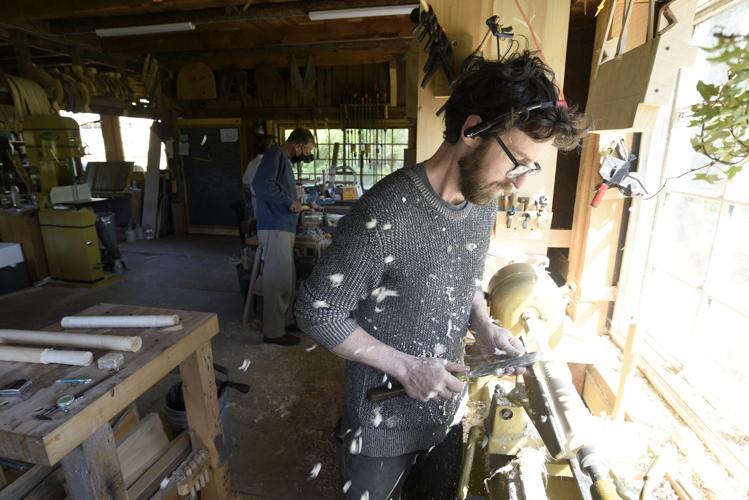 George Sawyer, owner of Sawyer Made, turns a maple chair leg on a lathe at his studio in South Woodbury. Sawyer will participate in the 2022 Spring Open Studio Weekend. 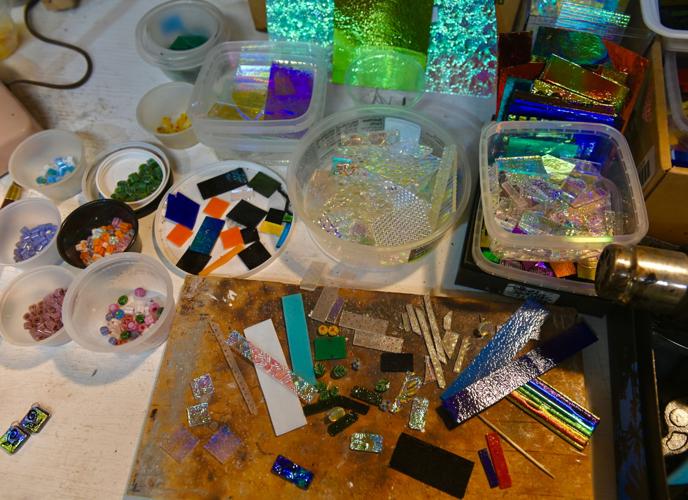 Karen Deets: “Back to Wonderland”

Becka Ranta, of Walden, makes a warp at the Marshfield School of Weaving. The school will participate in the 2022 Spring Open Studio Weekend.

Stained-glass artist Karen Deets works in her studio in Fair Haven on Wednesday.

George Sawyer, owner of Sawyer Made, turns a maple chair leg on a lathe at his studio in South Woodbury. Sawyer will participate in the 2022 Spring Open Studio Weekend.

The road is narrow, overhung with lush spring green-everything everywhere. There are only two houses on it, and as you drive deeper into the woods you come to the clearing of a driveway, and a corner-situated country house that looks like a year-round vacation spot, right near Glen Lake.

The drive to stained-glass artist Karen Deets’ Fair Haven studio is worth the trip alone, but inside, her studio is a playground. A neatly organized conglomeration chock-full of crates of glass, small tables with carpeted tabletops for cutting, ribbons of copper foil on reels, and a miscellany of tools. It’s inspiring. There’s a magic in the air and you find yourself wanting to learn what she knows.

“I love it as much as when I first began to do this,” Deets said Monday morning. Her career spans 30-plus years. She always has a stack of requests for custom work, and she teaches a popular stained glass class from her studio.

“My goal was to keep stained glass alive and keep up excitement and enthusiasm for it,” Deets said.

She is one of the 150 artists and artisans participating in the Vermont Crafts Council’s 2022 Spring Open Studio Weekend this year — a banner year for the institution, its 30th anniversary.

If you aren’t familiar with Open Studio, it’s a weekend when artists and artisans open their private studios to the public for a glimpse inside a world we rarely get to see — behind the closed doors where the magic happens, turning out the kind of high quality craft products Vermont is known for. It runs Memorial Day weekend, 10 a.m. to 5 p.m. Saturday and Sunday, May 28 and 29, and you’re invited.

“Everybody knows about maple syrup and craft beer,” said Lynn Barrett, public relations for Open Studio. “If you google ‘craft Vermont,’ craft beer (comes up). You don’t get (actual) crafts. So it’s an opportunity to really promote the arts craft side of Vermont.”

“I’m really curious about what led (someone) down a particular path to the life of an artist,” said Vermont Crafts Council Executive Director Martha Fitch.

While you’re at the studios, you can see specialized equipment and tools, hidden objects that have to do with the life of an artist. The juicy parts.

“These are things that artists don’t really think too much about,” Fitch said. “What you surround yourself with for inspiration as an artist is just part of what you do, and not necessarily something you would think to talk about. They don’t necessarily put this kind of information on their websites (which can be) pretty boiler plate, and you don’t get those interesting quirky little stories. Because that’s what I want to know about.”

Fitch was present 30 years ago in 1992 when Charley Dooley of Craftproducers was chair of the Vermont Crafts Council board and proposed the idea of Open Studio. His thought was that unlike farmers or teachers whose work is public, artists are basically invisible, working in their studios out of the public eye. We know their products are quality, but in large part have no idea how they’re made.

During its first year, 103 studios participated, and at that point it was only open to artists working in five traditional craft media of clay, fiber, glass, metal and wood.

“Initially, the concept was almost revolutionary, getting the whole state to cooperate on a single event,” Dooley has said, and added that back then it attracted support from State Travel and Tourism and major sponsors like Cabot.

But what’s really amazing is that 30 years ago there was no Internet, no cellphones, and the 911 network in Vermont had yet to map roads in rural places. The famous Open Studio maps didn’t even exist then.

“When we first started the major way to communicate with artists was through the phone or mail,” Fitch recalled. “And we didn’t understand how big the job was. How do you move people around the state when 911 hasn’t mapped out all the roads and named them?”

“And if somebody doesn’t know how to get you to their spot — you might find this to be fantastic, but we encountered it — people that have a really hard time determining right from left,” she said.

The first Open Studio Weekend was a mixed success with some studios receiving many visitors and others none. It was clear, though, that it had great potential. With the Internet making it infinitely easier to access the list of participants and where they were located, the event has run every year since, shutting down only once in 2020 due to COVID.

When asked how it’s changed through the years, Fitch replied, “It might be interesting to think about what hasn’t changed.”

“Visitors still have to physically go get in their cars and go to the studios,” she said. “What has changed is the large digital access. You no longer have to go to a gallery or a studio or a craft fair, you can do this online.”

It’s the difference between texting and talking to someone face to face.

The hand-made work you’ll find is a stark contradiction to the mass-market, machine-made items you find in big chain stores.

“We kind of bridge the worlds between craft and art,” Sawyer said. “The construction techniques we use have been around for hundreds of years. We try to adhere to them because we know that the chairs those produce can last hundreds of years.”

“We’re working with green wood, which is easier to work with hand tools,” he explained. “It’s more of a collaborative process, working with the wood, not telling the wood what to do. You follow the grain on the wood, and your spindles maintain strength and flexibility because you’re not slicing across the grain.”

Sawyer also teaches classes including an eight-day armchair class, at the end of which students have an armchair they handmade themselves to take home.

Fitch does the tour herself every year and says it helps her to see how it works on the physical level.

“I get to see whether the directions work, what happens to the signs. It’s very educational, and makes the experience better for the next time.”

During COVID the number of participants was halved, but even at a healthy 150 participants this year, Fitch says there are 10 times that many artist studios actually in the state.

“This year we were lucky enough to get a big grant, probably through COVID funds, from the Vermont Department of Tourism and Marketing, for marketing,” Fitch said.

Artists must become a member of the organization and pay a fee to participate and Fitch said if you don’t want people coming into your house to your kitchen table, you’re not going to sign up for Open Studio.

“If you have a physical studio that’s dedicated to artwork, that is the best fit,” she said.

And the tour is full of hidden gems like the artists mentioned in this article, and places like The Marshville School of Weaving in Montpelier, a well-established, nationally known school, ironically a bit obscure in its own home state.

“I’ve never read one local article although the school is nationally known. Why don’t we know about these amazing people that are right here?” Fitch said.

“We went to many people’s Open Studios and had a blast,” Deets said. “It’s fun meeting people and driving to interesting places.”

One of the things you can see in her studio is a kaleidoscope of stained-glass monarch butterflies in various stages of assembly, lying in wait on a light-table. They’re complicated to make, and she explained, “I like to represent things correctly. I do a lot of computer referencing for images.”

The detail and precision it takes to create one of her pieces you can’t put a time stamp on and another example of the opposite of a cookie-cutter item from a chain store.

“Part of the reason I came to Vermont, I had a feeling that the state was supportive of the arts,” Deets said. “There’s more of a community of art here.”

Thirty years after its humble beginnings, Open Studio Weekend continues to introduce the public to glass blowers, potters, metal workers, jewelers, book artists and rug hookers, among many others — many of whom might be your neighbors.

Part of the fun is planning your own tour and mapping a route, and this year a loops and tours section on the Open Studio website can help you find where clusters of studios are located.

“We made it a little easier for people based on how many studios (you’re) likely to really see, not just bop in and out, so that’s what those tour loops accomplish,” Fitch said.

“My biggest takeaway was how far the reach is,” said Montpelier artist Katie O’Rourke. “We had visitors from all over New England plus all the way from California and Washington State.”

It boils down to that mysterious pull that art can have, and the thought that maybe you can do it, too, and the backbone of Open Studio — “On the one hand it’s like, ‘Wow, these people are so amazing.’ And on the other hand, ‘But I could do this too,” Fitch said.

The Vermont Crafts Council 2022 Spring Open Studio Weekend welcomes visitors to over 150 sites across Vermont 10 a.m. to 5 p.m. Saturday and Sunday, May 28 and 29. Vermont Studio Tour Maps and details about the artists, including pictures of their work, are available online at www.vermontcrafts.com, and at travel information centers on I-89 and I-91. Visit www.vermontvacation.com for the lodging, dining, and other activities to enjoy on the Open Studio route.