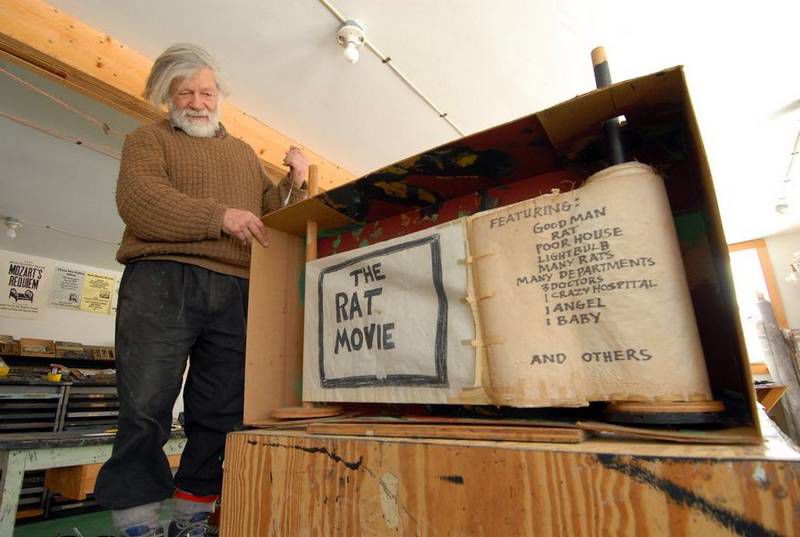 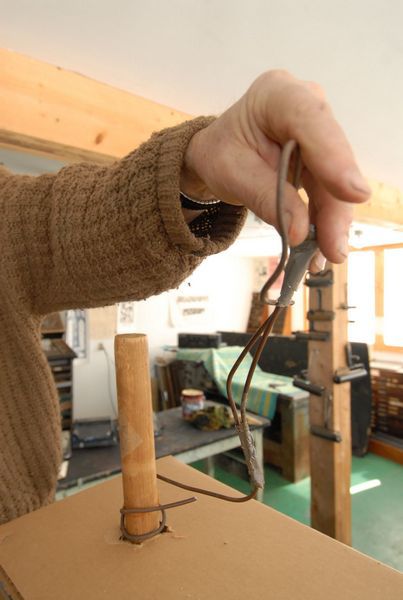 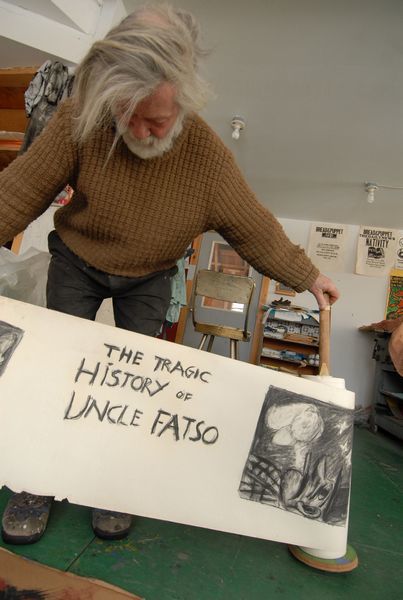 Scene 1: (Cranking here. Be patient. More cranking. It will be worth the wait. More cranking.) Across the makeshift screen slowly appears the title of the upcoming feature, "The Tale of the Crankie in Vermont." Despite the name and the often-pointed subject matter, this art form is more low-key than you might expect. A "crankie" is a moving picture show presented on a scroll of paper, often accompanied by music, and sometimes bearing a social or political theme. The scroll is placed on a dowel with the loose end of the roll attached to another dowel and rolled through a window or opening as the images tell a story. One could think of it as a rudimentary form of animation, but the story can be told in many ways. Some feature individual frames or pictures drawn on the paper. Others have scrawled, painted or printed images that morph and move through the story. All are complemented by a narrative. Scene 2: (Cranking here. Images slowly creep into view.) Across the screen rolls a Volkswagen bus with what looks like stage curtains across a side window. When Peter Schumann, the founder of Bread and Puppet Theater in Glover, landed in New York City in 1961, he rescued the remains of rolls of newsprint from the trash and drew stories on them. "They were the actual inspiration to make the crankies," Schumann says. "I think I thought I had invented them." He called his moving pictures show - which was based mostly on political issues in his city neighborhood - The Very Crankie Theater. Schumann would often find an empty box and use the opening as the screen while the scroll was rolled from one side to the other. As the storyteller, he could translate the tale into Spanish for a variety of children in the neighborhood. After explaining his own introduction in the art form, Schumann clarifies that scrolls were used to illustrate stories as entertainment in ancient Indian and Egyptian cultures. A recent exhibit at the Metropolitan Museum of Art included a large silk scroll from 12th-century China that told a historical narrative through calligraphy and painted images. In 1963 Schumann took his own show on the road in a Volkswagen bus. He set the vehicle up so that he could sit inside, use one of the side windows in the back as the screen and tell his story. Schumann says people gathered wherever he went, wanting to see the performance. Scene 3: (Continue cranking.) Images of Central American schoolchildren, taught by traveling Vermont crankie artist Karen Sutherland, skip into view. Pete Sutherland, husband and performance partner to crankie enthusiast Karen Sutherland, believes Schumann is the one who brought the idea to Vermont. Karen, who has a degree in early childhood education and has used crankies for years to help children learn, is doing her best to spread the concept in different areas of the world. Last week she was in the Transylvania region of Romania working with schoolchildren. "We always call her the Johnny Appleseed of crankies," says Pete, who often provides musical accompaniment for her shows. "We're probably better known as musicians than artists." The Monkton couple recently traveled to Costa Rica, where Karen visited a school that lacked an art program. Getting the children excited about making a crankie, a completely foreign concept, was slow going, according to Pete. Supplies are improvisational for most crankie theaters. "The whole thing is do-it-yourself, for sure," says Pete. "There's no crankie supply store." His wife likes to use rolls of shelf liner paper, but they are slick on the outer surface, so images are taped onto the roll. Beeswax crayons have become her favorite tool for teaching children how to tell colorful stories. "Kids love to do it," says Pete, who is to accompany Karen today at the inaugural Green Mountain Crankie Festival in Montpelier. "It's perfect for families." Scene 4: (Crank on.) A desolate ink-drawn scene of empty plains with the occasional flower or weed moves across the screen, part of a crankie about the history of death, scared up by Janet Van Fleet. Cabot-based artist Janet Van Fleet is the catalyst for bringing the crankie concept and artists to the T.W. Wood Gallery and Art Center for the one-day festival, which runs from 10 a.m. to 7 p.m. Most of the artists she rounded up are associated with Bread and Puppet Theater, which is where Van Fleet learned of the art form. "It's not just about presenting a series of images, any more than a film is just a series of images," Van Fleet says of crankie theater. "In the right hands it's a fabulous device." One of the more attractive things about this style of storytelling is how low-tech and small-scale it is, says Van Fleet. Pete Sutherland says Karen is a fan of how it slows everything down for people to enjoy on a more organic level. "This is an art form that has been around for a while," says Van Fleet. "But it's labor-intensive. Once (the) moving picture came along there was much less of a need to have storytelling done this way." She is hoping this first festival will grow each year, bringing people out of the woodwork who have either been doing crankie theater or have an interest in doing it. "There are little pockets of crankie-making in the country," says Van Fleet. "It's been a sparkle in my eye for many years. I love the idea of a crankie festival." Contact Sarah Hinckley at sarah.hinckley@times.argus.com.