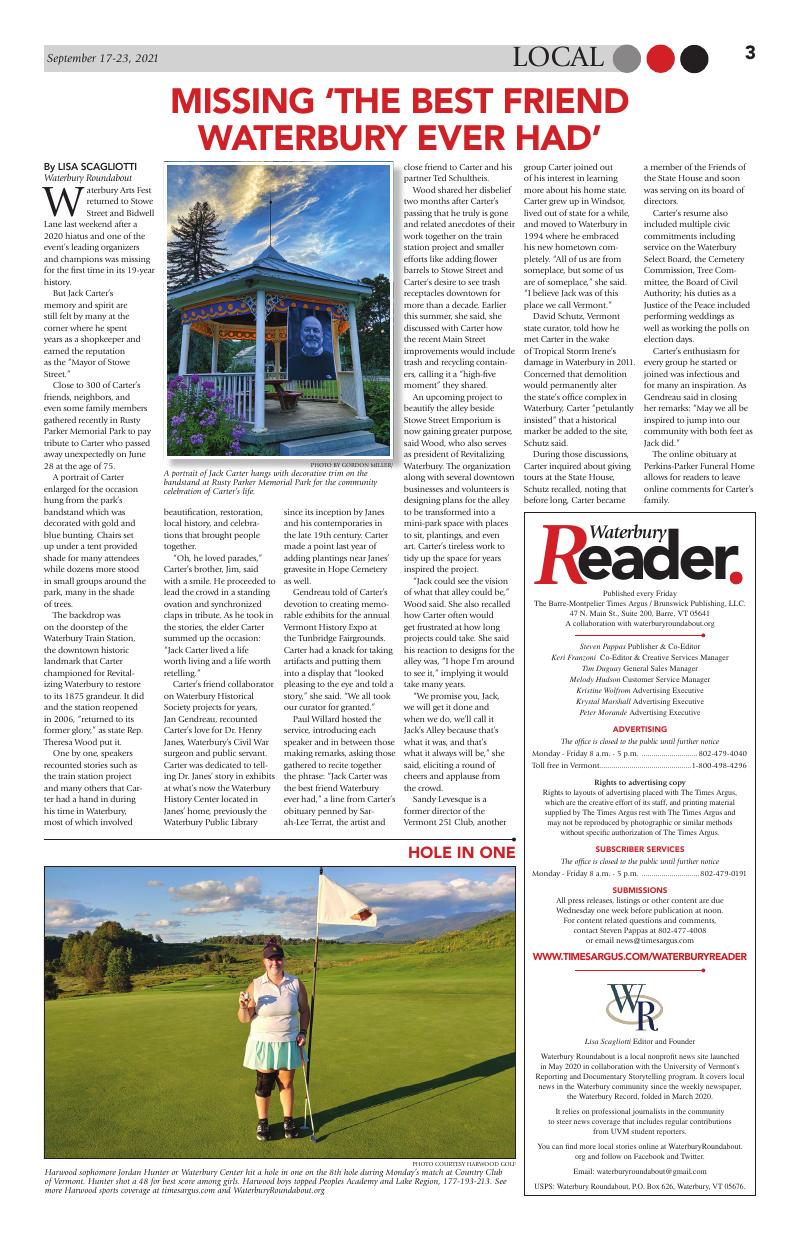 Tacw
Missing ‘the best friend Waterbury ever had’

Waterbury Arts Fest returned to Stowe Street and Bidwell Lane last weekend after a 2020 hiatus and one of the event’s leading organizers and champions was missing for the first time in its 19-year history.

But Jack Carter’s memory and spirit are still felt by many at the corner where he spent years as a shopkeeper and earned the reputation as the “Mayor of Stowe Street.”

Close to 300 of Carter’s friends, neighbors, and even some family members gathered recently in Rusty Parker Memorial Park to pay tribute to Carter who passed away unexpectedly on June 28 at the age of 75.

A portrait of Carter enlarged for the occasion hung from the park’s bandstand which was decorated with gold and blue bunting. Chairs set up under a tent provided shade for many attendees while dozens more stood in small groups around the park, many in the shade of trees.

The backdrop was on the doorstep of the Waterbury Train Station, the downtown historic landmark that Carter championed for Revitalizing Waterbury to restore to its 1875 grandeur. It did and the station reopened in 2006, “returned to its former glory,” as state Rep. Theresa Wood put it.

One by one, speakers recounted stories such as the train station project and many others that Carter had a hand in during his time in Waterbury, most of which involved beautification, restoration, local history, and celebrations that brought people together.

“Oh, he loved parades,” Carter’s brother, Jim, said with a smile. He proceeded to lead the crowd in a standing ovation and synchronized claps in tribute. As he took in the stories, the elder Carter summed up the occasion: “Jack Carter lived a life worth living and a life worth retelling.”

Gendreau told of Carter’s devotion to creating memorable exhibits for the annual Vermont History Expo at the Tunbridge Fairgrounds. Carter had a knack for taking artifacts and putting them into a display that “looked pleasing to the eye and told a story,” she said. “We all took our curator for granted.”

Paul Willard hosted the service, introducing each speaker and in between those making remarks, asking those gathered to recite together the phrase: “Jack Carter was the best friend Waterbury ever had,” a line from Carter’s obituary penned by Sarah-Lee Terrat, the artist and close friend to Carter and his partner Ted Schultheis.

Wood shared her disbelief two months after Carter’s passing that he truly is gone and related anecdotes of their work together on the train station project and smaller efforts like adding flower barrels to Stowe Street and Carter’s desire to see trash receptacles downtown for more than a decade. Earlier this summer, she said, she discussed with Carter how the recent Main Street improvements would include trash and recycling containers, calling it a “high-five moment” they shared.

An upcoming project to beautify the alley beside Stowe Street Emporium is now gaining greater purpose, said Wood, who also serves as president of Revitalizing Waterbury. The organization along with several downtown businesses and volunteers is designing plans for the alley to be transformed into a mini-park space with places to sit, plantings, and even art. Carter’s tireless work to tidy up the space for years inspired the project.

“Jack could see the vision of what that alley could be,” Wood said. She also recalled how Carter often would get frustrated at how long projects could take. She said his reaction to designs for the alley was, “I hope I’m around to see it,” implying it would take many years.

“We promise you, Jack, we will get it done and when we do, we’ll call it Jack’s Alley because that’s what it was, and that’s what it always will be,” she said, eliciting a round of cheers and applause from the crowd.

Sandy Levesque is a former director of the Vermont 251 Club, another group Carter joined out of his interest in learning more about his home state. Carter grew up in Windsor, lived out of state for a while, and moved to Waterbury in 1994 where he embraced his new hometown completely. “All of us are from someplace, but some of us are of someplace,” she said. “I believe Jack was of this place we call Vermont.”

David Schutz, Vermont state curator, told how he met Carter in the wake of Tropical Storm Irene’s damage in Waterbury in 2011. Concerned that demolition would permanently alter the state’s office complex in Waterbury, Carter “petulantly insisted” that a historical marker be added to the site, Schutz said.

During those discussions, Carter inquired about giving tours at the State House, Schutz recalled, noting that before long, Carter became a member of the Friends of the State House and soon was serving on its board of directors.

Carter’s resume also included multiple civic commitments including service on the Waterbury Select Board, the Cemetery Commission, Tree Committee, the Board of Civil Authority; his duties as a Justice of the Peace included performing weddings as well as working the polls on election days.

Carter’s enthusiasm for every group he started or joined was infectious and for many an inspiration. As Gendreau said in closing her remarks: “May we all be inspired to jump into our community with both feet as Jack did.” 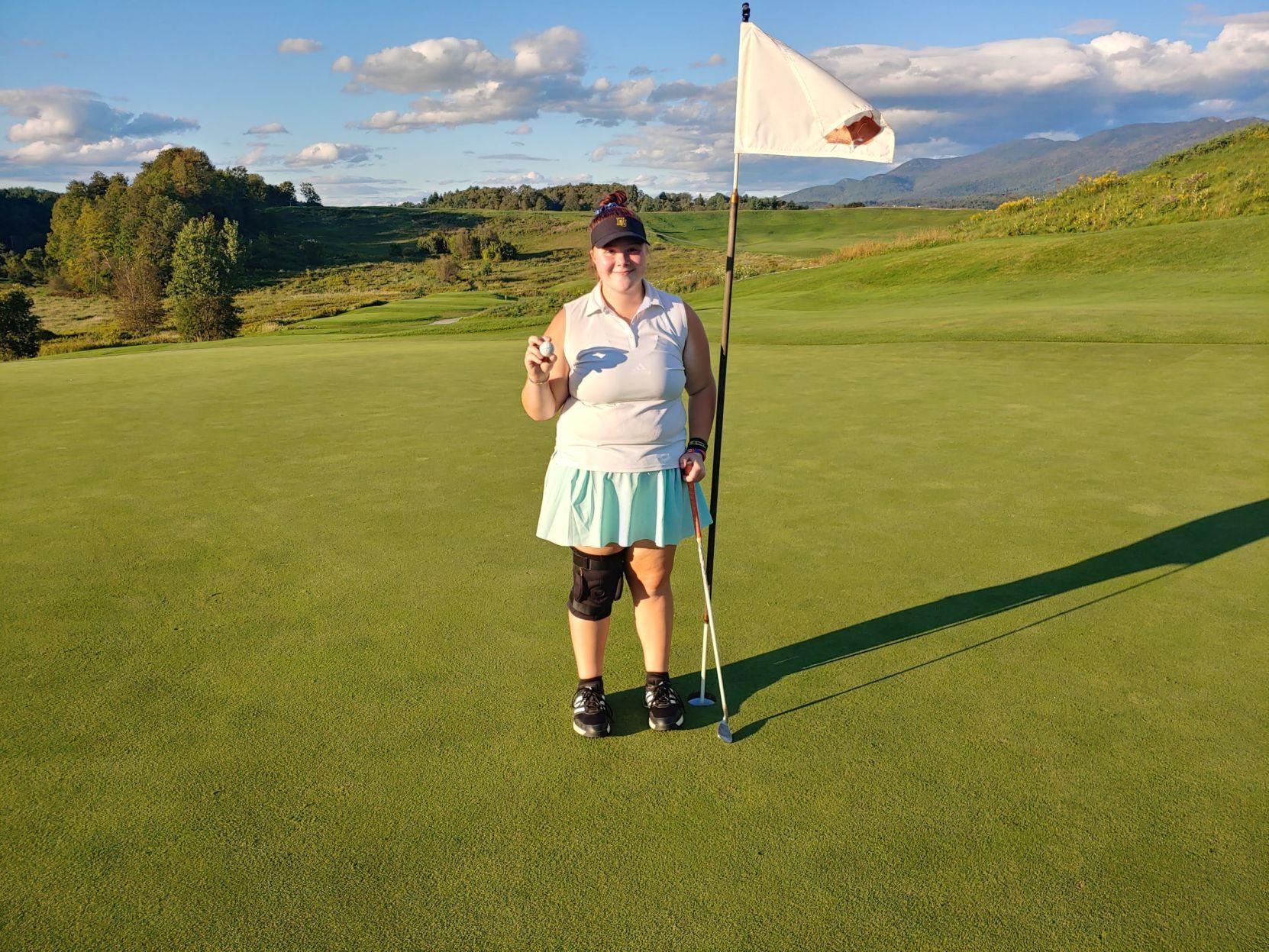 Harwood sophomore Jordan Hunter or Waterbury Center hit a hole in one on the 8th hole during Monday’s match at Country Club of Vermont. Hunter shot a 48 for best score among girls. Harwood boys topped Peoples Academy and Lake Region, 177-193-213. See more Harwood sports coverage at timesargus.com and WaterburyRoundabout.org