DUXBURY — For the next several weeks, Harwood Union’s school superintendent will be on leave with several members of the administrative team filling in to cover her responsibilities.

Superintendent Brigid Nease said Tuesday that she is taking sick leave, which started on Sept. 9, through Oct. 8.

“The HUUSD admin team and I put a plan in place while I am away,” she said in an email Tuesday. “(Waitsfield Elementary School) Principal Kaiya Korb will be named as acting superintendent.”

Shannon Lessley, director of curriculum and technology, and Stephanie Hudak, director of student support services, will be designated in several areas, Nease explained. “The three of them will have decision-making authority in my absence for basic daily responsibilities. I remain available to them, (Finance and Operations Manager) Michelle (Baker), and the principals by phone and email at any time. This is the usual and customary plan used by districts when a superintendent needs a substitute.” The school district did not announce Nease’s leave. Information was shared after an inquiry from Waterbury Roundabout.

The need for Nease to take this leave came after the school board on Aug. 24 agreed to pay Nease for 35 accrued vacation days during this school year. Nease plans to step down next June when her contract ends. She has been superintendent in the district since 2009.

Prior to her starting sick leave, Nease said she had a total of 89 accrued days (75 vacation days, 10 holidays and four personal days).

She said she hoped to take the remaining 54 days after the board agreed to pay for a portion of her total banked leave. Nease said the current four weeks falls under the federal Family Medical Leave Act which allows for workers to take up to 12 weeks leave annually either paid or unpaid, or a combination of the two. Nease did not say how much of this month’s leave would be paid.

School Board Chair Torrey Smith said the school board has been filled in on the plan to cover for Nease while she is away.

“While it temporarily increases the workload for several staff in the district, it offers continuity for all because they are already deeply familiar with the frameworks and structures that we use,” she said in an email Tuesday. “Our building and district leaders have been working very closely together for years and we are confident in the admin team’s ability to manage this temporary situation.”

Both Nease and Smith said the reason for Nease’s leave is confidential.

Since last week, several announcements to the school community have come from school officials other than Nease. A letter last week announcing a positive case of COVID-19 in an individual at Warren Elementary School — the district’s third case so far since school opened Aug. 26 — was signed by school nurse Allison Conyers, the district’s COVID-19 coordinator. A Saturday email to families announcing updates in the bus schedule came from Korb.

The school board at its meeting on Wednesday was to review a timeline for the search for a candidate to replace Nease in 2022. It calls for appointing a committee of the school board to work with a national search firm the board has chosen and to oversee that process with a goal of choosing a candidate for the job by February. 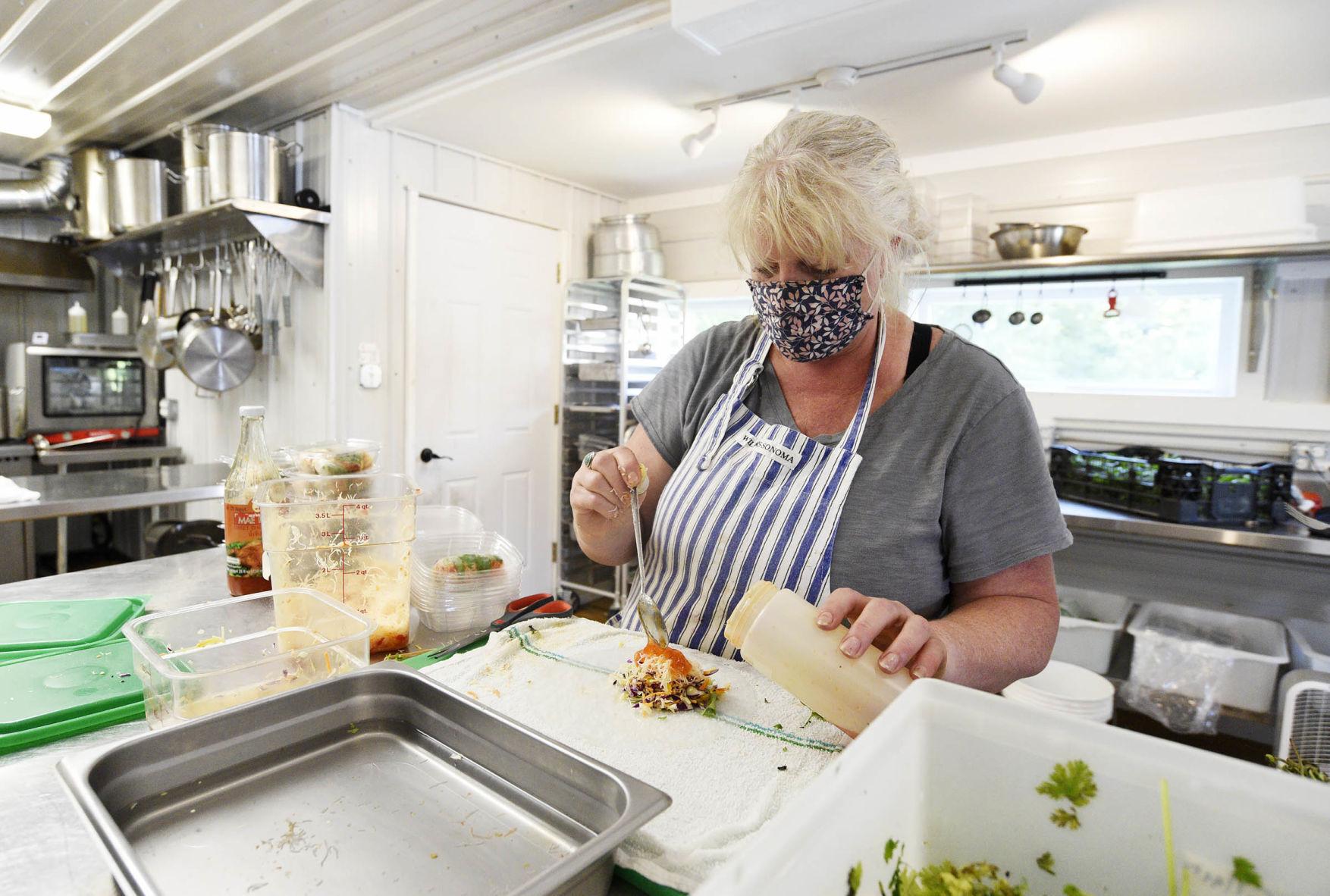 Annette Fitzgerald, of Middlesex, makes spring rolls Tuesday with farm-fresh ingredients at the Roots Farm Market in Middlesex. The popular market built a commercial kitchen earlier this year and produces fresh grab-and-go items daily. They will be adding hot soups and sandwiches this week as cooler temperatures arrive.

The following is a sampling of calls to Montpelier police in recent days.

Aug. 30A dog was barking on North Street.

On Brown Street, a tree branch was hanging in the roadway.

Aug. 31A bicycle was stolen on Stone Cutters Way.

A wallet was lost downtown.

Kids were destroying flowers near a business on Berlin Street.

Four people were drinking on benches in front of Kellogg-Hubbard Library.

Sept. 2A dog was barking on George Street.

There was a suspicious vehicle on Terrace Street.

Sept. 3There was a pedestrian on Interstate 89.

Items were stolen from a business on Main Street.

A brown purse was found in bushes on Northfield Street.

Sept. 4A plastic flamingo was stolen from a lawn on Barre Street.

On Main Street, someone tried to break into a business.

A dog was lost on Pembroke Heights.

There was a two-car crash on Berlin Street at about 2:45 p.m. No injuries were reported.

Sept. 6A motorcycle broke down on Memorial Drive.

On State Street, a debit card was found.

A vehicle was idling for a while next to City Hall.

Someone was using a vehicle without permission on Prospect Street.

Sept. 8A dump truck broke down on Memorial Drive.

Vandalism was reported on Main Street.

A small, brown wallet was found on State Street.

A squirrel was in the roadway on Elm Street.

Sept. 9A dog was barking on Cummings Street.

Someone was driving erratically on East State Street.

A phone scam was reported on Hubbard Park Drive.

A vehicle was “doing doughnuts” and revving its engine on Old Country Club Road.

On Northfield Street, a vehicle was stolen.

Items were stolen from a home on Elm Street.

Sept. 11A light bar was stolen from a vehicle on Green Mountain Drive.

On State Street, a debit card was found and its owner was contacted.

A cash box was ripped off a wall on Langdon Street.

On Charles Street, a vehicle’s tires were vandalized.

A water leak was reported on Cummings Street.

Sept. 12Squirrels got into a house on Crestview Drive.

A dog was barking on Main Street.

The Williamstown Selectboard received an offer Monday from the current owner of the former Rosewood Inn to deed the building to the town.

WILLIAMSTOWN — It isn’t yet clear whether Helen Duke’s dream was dashed, but the Select Board didn’t look a gift house in the mouth Monday night — accepting a Massachusetts man’s unsolicited offer to deed a dilapidated three-story Steamboat Gothic Queen Anne to the town.

Once operated as the Rosewood Inn, the sprawling structure has been Williamstown’s biggest blighted building for several years. It inspired a recently adopted vacant buildings ordinance that Town Manager Jackie Higgins was in the process of enforcing with respect to the property when owner Richard Eldridge contacted her hours before Monday night’s board meeting.

Eldridge, Higgins explained, said he was recently released from a contract that was in place while Central Vermont Habitat Humanity was exploring the possibility of redeveloping the property and was prepared to gift it to the town. That offer was included in a brief email Eldridge sent to Higgins shortly after 3:30 p.m. Monday and was a last-minute addition to the board’s warned agenda.

Duke attended the meeting for other reasons, but was present for the session-ending discussion involving a property she has dreamed of restoring and reopening as a bed and breakfast. It’s one, she told the board, that would feature a “tea room” at first and might eventually offer dinners on Friday and Saturday nights and where she and her husband, Horace, would establish a third-floor residence.

Duke urged board members to delay their acceptance of Eldridge’s offer for a day so she could contact him and possibly acquire the property for a price they had previously discussed as part of informal conversations that date back more than a decade.

“I’m sure the town would want more money than what Richard (Eldridge) offered it to us for,” she said.

Duke didn’t disclose the potential purchase price, but expressed her strong preference to deal directly with Eldridge and her hope the board would give her time to contact him first thing Tuesday morning.

The request posed a conundrum for board members who expressed interest in accommodating Duke’s request, but concern that doing so might prompt Eldridge to rescind his offer without selling the property to Duke.

Board Chair Rodney Graham said he felt for Duke, but didn’t relish the prospect of an “eyesore” remaining an eyesore because the board didn’t act when it had the chance.

“Consider what kind of (expletive deleted) we would get if we lost this opportunity,” he said, suggesting the board could explore what to do with the property after getting control of it.

Members agreed that might involve selling it to Duke — an option they could further explore after taking title to the prominent local building that has overlooked the stretch of Route 14 that doubles as Main Street in Williamstown since 1898.

Higgins said the price was right and suggested the board heed the advice of Harold Sinclair, a now-deceased farmer from Bradford who was a long-time family friend.

“‘Take anything if it’s free, even is you have to bury it,’” she said.

After some back-and-forth that yielded questions that couldn’t be answered Monday night, board members unanimously voted to accept Eldridge’s offer. The questions involved the board’s discretion with respect to disposition of the property once the town takes title to it.

Higgins said Tuesday she communicated the board’s decision to Eldridge first thing Tuesday morning and a deed was being drafted transferring ownership of the run-down inn to the town. The town, she said, would be responsible for registering the vacant building as required by the new ordinance and for boarding and shoring it up while it weighs what to do with it.

Duke has an idea and told board members Monday night she was aware the building needs a lot of work.

Selectman Matt Rouleau, a builder by trade, feared the old inn is something of a “white elephant” — one that would take a lot of work, a lot of time and a lot of money to restore.

“That would take me, with a crew of five guys, $2 million and a year and a half to make … new again,” he said, adding: “But it would be beautiful.”

Board member Jasmyn Couillard said she hoped that could happen.

“There’s so many people in town that … want to see … something (done with it),” she said of the old inn. “They don’t want to see it demolished because it is part of the town’s history.”

All agreed controlling the property was a necessary first step and chose not to squander the opportunity that presented itself.

Higgins said Tuesday as soon as the quit-claim deed is drafted and executed, that step will be complete and the board could explore its options.