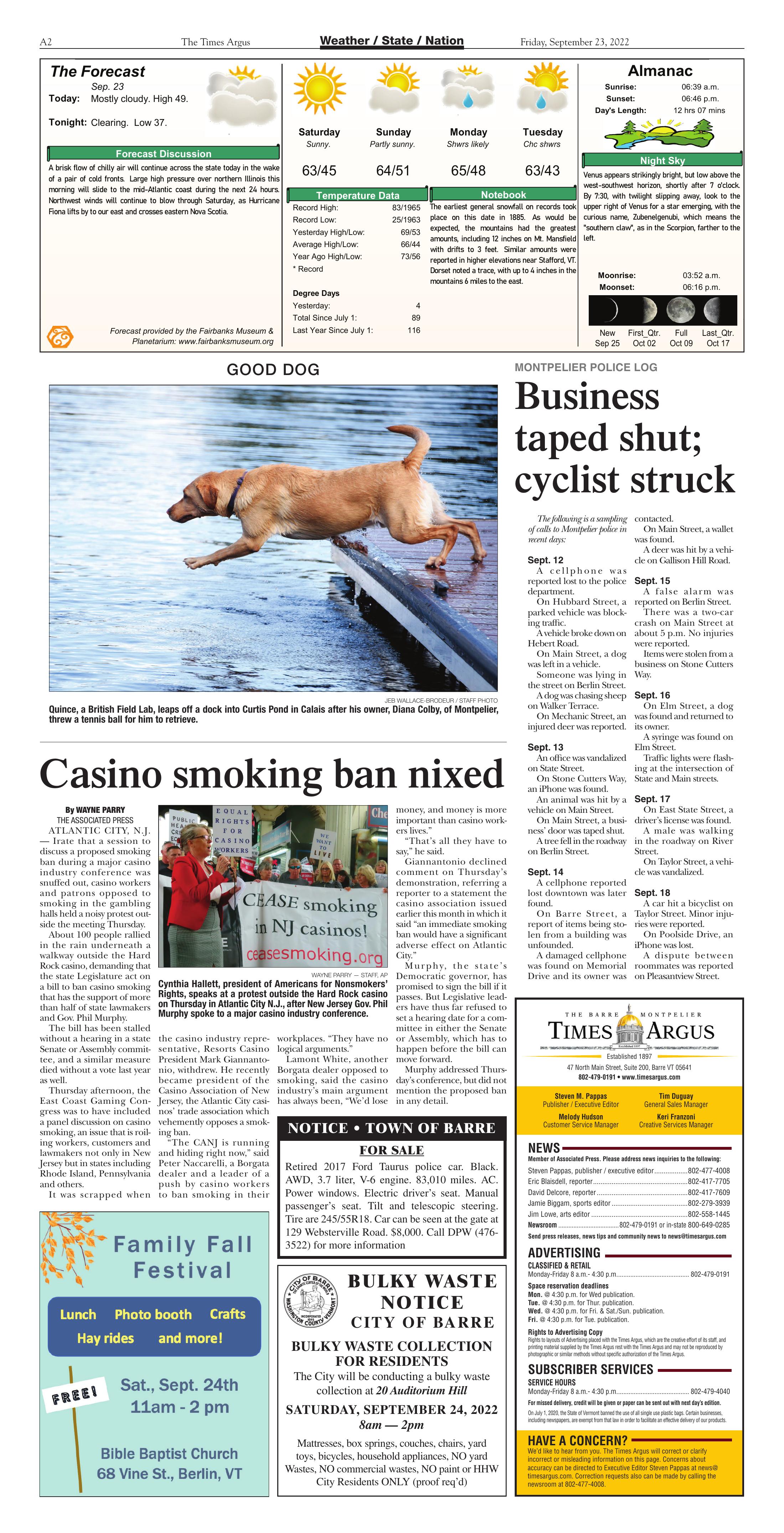 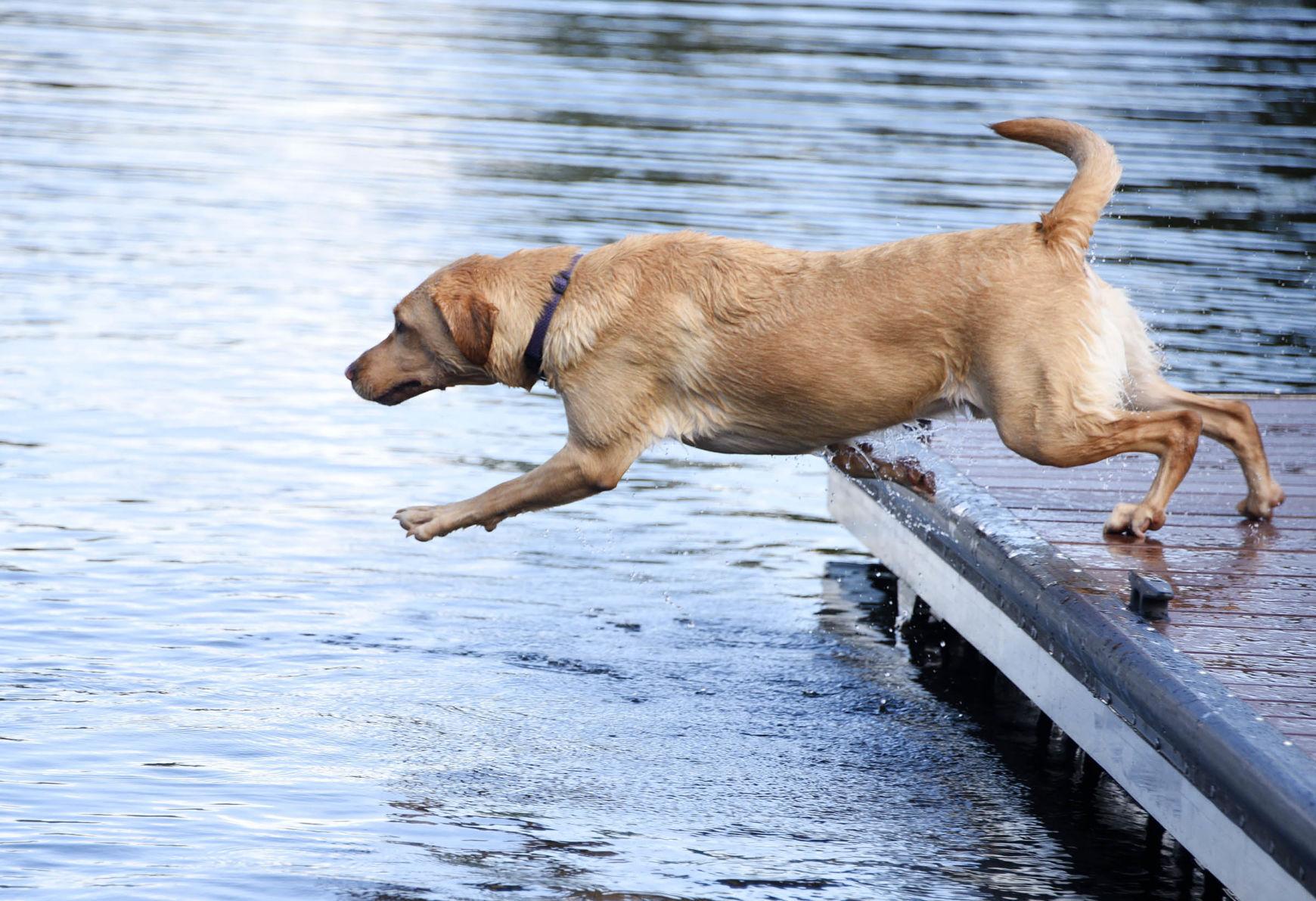 Quince, a British Field Lab, leaps off a dock into Curtis Pond in Calais after his owner, Diana Colby, of Montpelier, threw a tennis ball for him to retrieve.

ATLANTIC CITY, N.J. — Irate that a session to discuss a proposed smoking ban during a major casino industry conference was snuffed out, casino workers and patrons opposed to smoking in the gambling halls held a noisy protest outside the meeting Thursday.

About 100 people rallied in the rain underneath a walkway outside the Hard Rock casino, demanding that the state Legislature act on a bill to ban casino smoking that has the support of more than half of state lawmakers and Gov. Phil Murphy.

The bill has been stalled without a hearing in a state Senate or Assembly committee, and a similar measure died without a vote last year as well.

Thursday afternoon, the East Coast Gaming Congress was to have included a panel discussion on casino smoking, an issue that is roiling workers, customers and lawmakers not only in New Jersey but in states including Rhode Island, Pennsylvania and others.

“The CANJ is running and hiding right now,” said Peter Naccarelli, a Borgata dealer and a leader of a push by casino workers to ban smoking in their workplaces. “They have no logical arguments.”

Giannantonio declined comment on Thursday’s demonstration, referring a reporter to a statement the casino association issued earlier this month in which it said “an immediate smoking ban would have a significant adverse effect on Atlantic City.”

Murphy, the state’s Democratic governor, has promised to sign the bill if it passes. But Legislative leaders have thus far refused to set a hearing date for a committee in either the Senate or Assembly, which has to happen before the bill can move forward.

Murphy addressed Thursday’s conference, but did not mention the proposed ban in any detail.

But during an afternoon session, Eric Hausler, CEO of Greenwood Racing, which owns Pennsylvania’s smoke-free Parx casino, said that policy has been successful.

When reopening in 2020 after the initial wave of the pandemic, Hausler said, Parx decided to remain smoke-free, “for better or worse. If you look at our market share numbers, they’re holding up just fine. We intend to stay that way. Our customers have gotten used to it.”

The following is a sampling of calls to Montpelier police in recent days:

Sept. 12A cellphone was reported lost to the police department.

On Hubbard Street, a parked vehicle was blocking traffic.

A vehicle broke down on Hebert Road.

On Main Street, a dog was left in a vehicle.

Someone was lying in the street on Berlin Street.

A dog was chasing sheep on Walker Terrace.

On Mechanic Street, an injured deer was reported.

Sept. 13An office was vandalized on State Street.

On Stone Cutters Way, an iPhone was found.

An animal was hit by a vehicle on Main Street.

On Main Street, a business’ door was taped shut.

A tree fell in the roadway on Berlin Street.

On Barre Street, a report of items being stolen from a building was unfounded.

A damaged cellphone was found on Memorial Drive and its owner was contacted.

On Main Street, a wallet was found.

A deer was hit by a vehicle on Gallison Hill Road.

A false alarm was reported on Berlin Street.

There was a two-car crash on Main Street at about 5 p.m. No injuries were reported.

Items were stolen from a business on Stone Cutters Way.

On Elm Street, a dog was found and returned to its owner.

A syringe was found on Elm Street.

Traffic lights were flashing at the intersection of State and Main streets.

On East State Street, a driver’s license was found.

A male was walking in the roadway on River Street.

On Taylor Street, a vehicle was vandalized.

A car hit a bicyclist on Taylor Street. Minor injuries were reported.

On Poolside Drive, an iPhone was lost.

A dispute between roommates was reported on Pleasantview Street.