BARRE — The Barre Unified Union School District doesn’t yet have a voter-approved budget for the coming fiscal year, but it should end the current one with a comfortable cushion.

Three weeks after being told the pre-K-12 district was on track to post a $640,000 surplus, members of the School Board finance committee learned Tuesday that estimate has now swelled to roughly $870,000.

“It’s even better than we expected,” said School Director Sarah Pregent, chairwoman of the committee.

With less than three months to go in a fiscal year that will end June 30, Business Manager Lisa Perreault said she is “very confident” in her revised estimate.

“We’re really getting to the point where I’m able to make a better projection,” Perreault said.

The latest estimate reflects a full three-quarters of expenditures and revenues. Both are trending in the right direction even as the window for surprises with financial implications is quickly closing.

Pregent echoed that assessment, noting that if the numbers hold, it would address concerns about depleting the district’s tax stabilization fund in an effort to reduce the tax impact of its yet-to-be-approved budget.

The balance in the stabilization fund now stands at roughly $644,000. The School Board initially planned to use $200,000 of that money as a source of revenue for the $50.5 million budget that was narrowly defeated in March. However, the budget’s failure prompted a series of adjustments, the largest of which involved a decision to use an additional $300,000 from the stabilization fund as a source of revenue.

Pregent said tapping the fund to the tune of $500,000 to support the $50.4 million budget voters in Barre and Barre Town will be asked to approve on May 11 would have left a balance of $144,000. That’s less than the $200,000 board originally planned to use for the coming fiscal year.

Based on Perreault’s latest estimates, Pregent said the board should be able to replenish the tax stabilization fund with $370,000 to spare.

Though Perreault stressed the fiscal year hasn’t yet ended, much less been audited, she said the board could choose to deposit the surplus she is now anticipating in the tax stabilization fund, the district’s capital reserve fund, or, as Pregent suggested, some combination of the two.

Perreault credited the fiscal discipline of the district — from its top-tier administrators to teachers — for a favorable financial forecast that has improved even without factoring in most of the federal money it has or will receive as a result of the COVID-19 pandemic.

According to the latest projections, the district’s non-grant revenues aren’t expected to hit the budget’s $45 million target, but they are inching closer. Perreault is now projecting the district will receive $44,838,605 in revenue — nearly $70,000 more than she forecast three weeks ago.

The most notable changes included an increase of roughly $42,000 in rental revenue associated with the use of the district’s kitchen facilities to prepare meals for homeless central Vermonters and a $25,000 bump in projected interest income.

Last month, Perreault pegged facilities rentals at about $114,000 — the budget approved by voters more than a year ago assumed only $12,000. The figure has now swelled to nearly $157,000 and could climb higher because the district has already received all of that money.

Revenue from interest income was budgeted at $55,000 for the year. Three weeks ago the district had already taken in $50,000 and Perreault was estimating the number would climb to $75,000. It already has and the numbers presented to the finance committee on Tuesday now suggest it will climb to $100,000 before June 30.

While revenue estimates have steadily increased, projected expenditures have dropped.

Three weeks ago, Perreault predicted they were on track to come in at more than $1.36 million under budget. As of Tuesday that number now stands $1.455 million — an additional saving of nearly $91,000.

The most notable adjustments include roughly $55,000 in additional staff-related savings, an extra $10,000 tied to the still-vacant assistant principal’s position at Barre Town Middle and Elementary School and $15,000 in money the district no longer expects to spend on building projects.

Based on those numbers, the district’s operating surplus now sits at a projected $1.26 million. That figure includes more than $392,000 in pandemic-related funding, that when deducted, leaves a projected fund balance of $870,000.

Those numbers don’t include most of the COVID-relief money the district has received, nor any of the $10.89 million it is expected to be awarded under the American Rescue Plan during the next year. 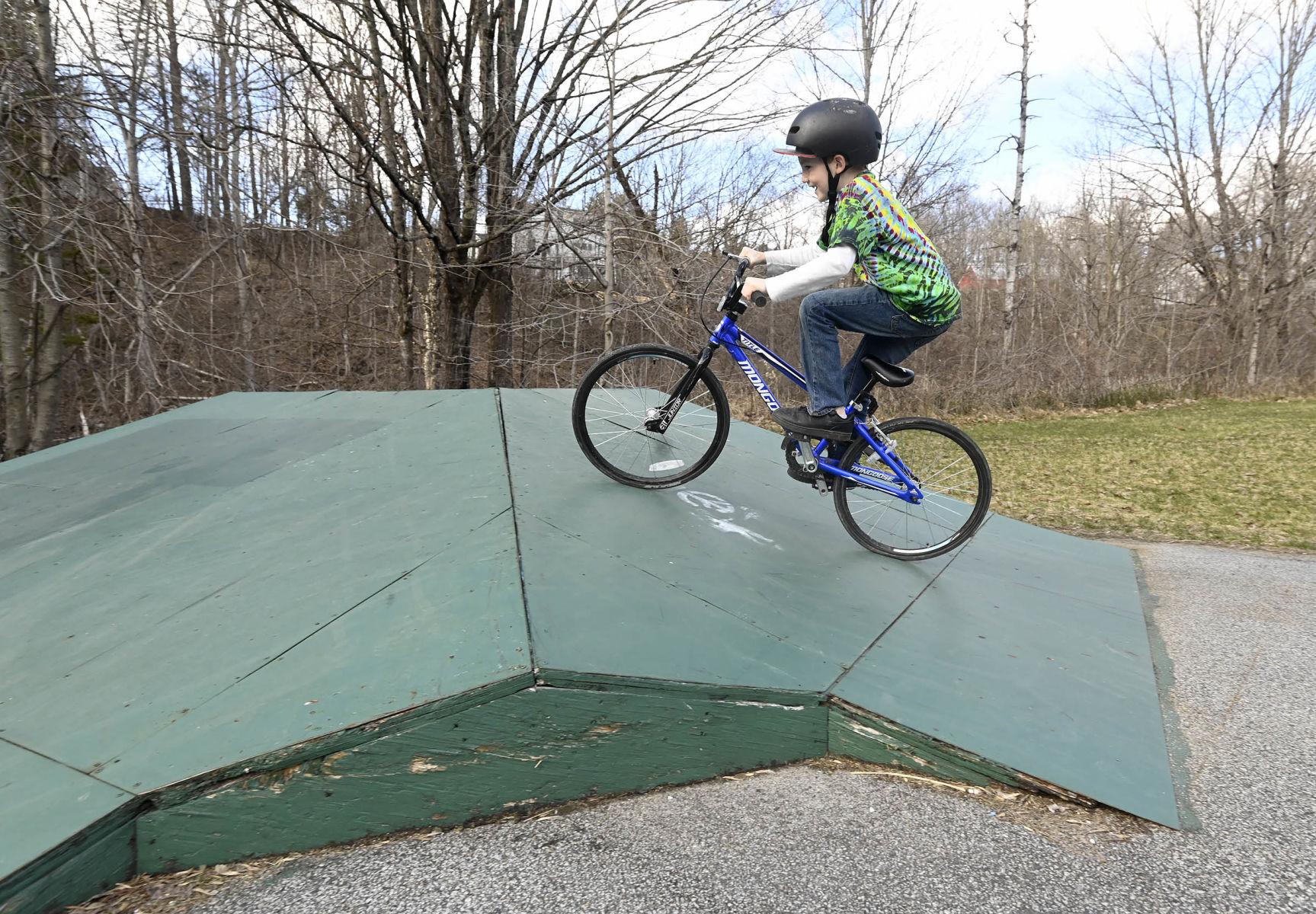 Landen Ripley-Young, 8, of Plainfield, rides his bike over a ramp at the town’s skateboard park on Wednesday.

CABOT — Residents voted down the school budget Tuesday by a vote of 211-198.

Mark Tucker is the superintendent of Caledonia Central Supervisory Union, which oversees Cabot. Tucker said in an email Wednesday the budget was more than the Excess Spending Threshold. That’s a penalty from the state where a town pays $2 for every $1 raised by taxes if education spending goes over that threshold.

Tucker said School Board members worked hard this year to stay under the threshold, but deficits in special education and food service, as well as a change in the retirement rate for federally funded positions, “made it impossible.”

“Collectively, all three appear as deficits that cannot be carried forward, and they are being ‘paid off’ using a deficit reduction note that will cost the school about $28,000/year for the next 5 years. That collective deficit, a reduction in the (common level of appraisal), and the loss of about (three) equalized pupils tallied up to a 12-cent tax increase. (Six)-cents of that increase is owing to the excess spending penalty. In past years, the Cabot community has been unwilling to support budgets that included any spending penalty, and I suspect that some of the ‘no’ votes stem from this very issue,” the superintendent said.

Residents voted down school budgets in 2017 and 2018 which were over the threshold.

Tucker said the board and administration have made it clear they are not going to cut staffing after reconfiguring the high school and elementary school in an effort to reduce costs. He said school officials look forward to having all students back in the classroom this fall after dealing with the coronavirus pandemic which has taken a toll on those students.

“We need more staff, not less,” he said. “So we will go back to the drawing board and see if we can find another $96K to cut so that we can get under the penalty threshold. There may be some opportunities for savings resulting from staffing changes that we learned about after the budget was approved — a couple of retirements, and a couple of other teachers who are moving on — that we have managed to replace with new hires that have lower salary.” 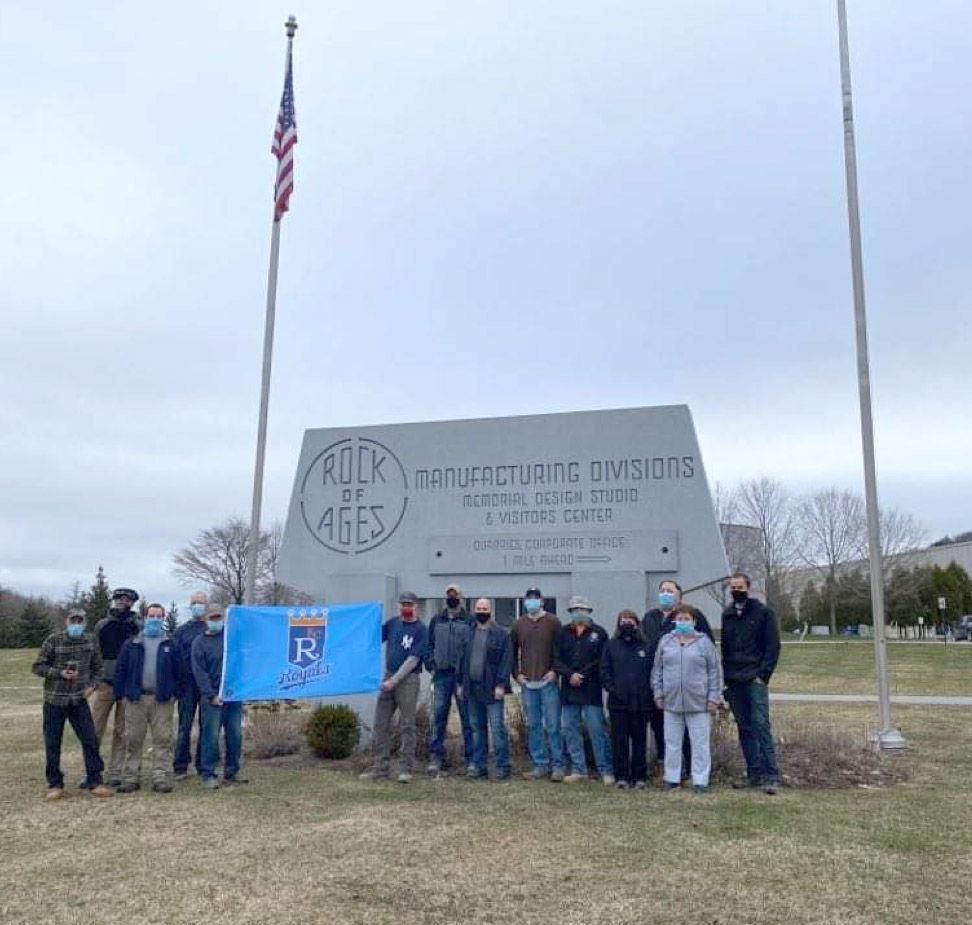 Members of the Industrial Products team at Rock of Ages in Barre Town gathered Wednesday morning to honor Randy Copping by raising a Kansas City Royals flag in his honor. Copping worked for nearly 38 years at the manufacturing plant before passing away three years ago from pancreatic cancer. The Royals were Copping’s favorite team and the flag flew outside the plant in his honor.

The cost of materials and availability of labor could pose challenges to Vermont’s plans to expand its broadband infrastructure, but leaders say the state is ready.

Gov. Phil Scott was among several state and Congressional leaders speaking at a remote broadband round-table discussion hosted Wednesday by Sen. Patrick Leahy, D-Vt. They talked about the $113 million in funds Vermont will receive for broadband improvement through the American Rescue Plan, a federal funding package aimed at helping the country recover from the coronavirus pandemic.

Scott, who outside his government career has a background in the construction industry, said he’s noticed the price of building materials has been rising dramatically, “and I’m wondering about fiber right now, and some of the conduits that’s needed, and some of the operations. Is that becoming a problem as far as availability?”

He asked this of Kurt Gruendling, vice president of marketing and business development for Waitsfield and Champlain Valley Telecom.

“Yes, the availability of fiber is becoming more and more of a problem,” said Gruendling. “We’ve ordered a lot of cable in the past year to try to keep up with future projects and future demands.”

Prices have risen on electronic components as well. Gruendling said it’s likely because of coronavirus related delays such as plants shutting down, disrupting supply chains, but the rise in demand as well.

Gruendling said he’s concerned that during the next 5 years getting needed materials may be difficult, what with all the federal and state funding programs for infrastructure.

“We’re fortunate to have really good vendor relationships that go back many decades and we’ve been able to work around those challenges, but it hasn’t been easy, and I think it’s going to get harder,” he said.

Solid planning so these roll outs can happen sooner will be key, according to NEK Community Broadband Chairman Evan Carlson.

“We had heard, anecdotally, the same things about challenges with materials and fiber supply lines, especially last year with the super-tight deadline, so I think the sooner we can get planning in order, anticipating the accelerated build outs over the next couple of years, the better,” he said.

Much of the CARES Act funding from 2020 had to be spent by the end of the year, causing many to hastily work through permitting processes, if they had time at all.

State House Rep. Tim Briglin, D-Thetford, who leads the House Committee on Energy and Technology, noted that Vermont might also be competing, regionally and nationally, for line workers and others who’d be involved in the broadband roll outs.

Scott agreed, though he added that workforce challenges were an issue for Vermont even before the pandemic, and not just in the communications sector.

“This is going to be challenging, but I think we’re up for it,” he said. “We have the safest, healthiest state in the country and we’ve seen where the real estate market is currently. It’s probably a very hot market because of what we’ve done with the pandemic, and we just have to take advantage of that and try and attract more people to the state.”

Vermont was wrong. And now we begin the long walk toward doing the right thing moving forward. A4

Thunder Road hires Scott Tapley as the track’s Race Director for the 2021 season. B1 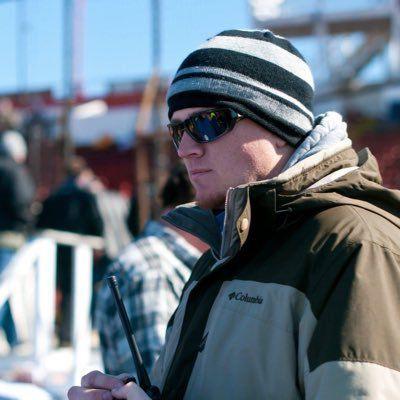