MONTPELIER — Cities and towns across Vermont are on the clock when it comes to applying for the first installment of funding available under the American Rescue Plan Act and it is just dawning on some of them that those checks will be considerably smaller than they were led to believe.

That could change, but city councils in Barre and Montpelier were alerted this week to dial down their expectations.

In Barre, City Manager Steve Mackenzie delivered the message by memo. In Montpelier where councilors recently launched a discussion about how to spend the money they were expecting, City Manager Bill Fraser warned they might not receive as much as they thought as Wednesday night’s virtual meeting was coming to a close.

For the moment at least, it appears the initial estimates provided earlier this year by the Central Vermont Regional Planning Commission were more accurate than the ones Rep. Peter Welch, D-Vt., shared with both councils on back-to-back nights in late March.

Barre, Welch told councilors there on March 23, could expect to receive a total of just under $2.5 million in two equal installments, including one that based on his understanding at the time, should have arrived by late last month. It didn’t.

Welch’s claims presumed money destined for county governments would be redistributed to local municipalities in Vermont — an adjustment the U.S. Treasury Department hasn’t yet made and, Mackenzie and Fraser both warned their respective councils this week, may not.

Despite lobbying from Vermont’s congressional delegation, Gov. Phil Scott and the Vermont League of Cities and Towns, the Treasury Department has yet to alter its unexpected ruling that Vermont does have general units of county government and a significant portion of the state’s ARPA allocation — more than $121.2 million — should go to them and not be directly distributed to cities and towns using a population-based formula.

That matters, because it accounts for roughly two-thirds of the money Barre, Montpelier and several other Vermont communities were told they could expect earlier this year.

This week, the state Department of Finance and Management opened the web portal where Vermont municipalities may request their share of $58.8 million in “local fiscal recovery funding” available under the pandemic-related rescue plan. That’s roughly one-third of what had previously been projected and disbursement to individual municipalities are far closer to the regional planning commission’s original estimates.

The commission had initially projected Barre was in line to receive a total of $840,000 and Barre Town $760,000. Welch upped those estimates to $2.5 million and $2.26 million respectively based on the assumption municipalities would receive county money in Vermont.

According to the latest estimates posted on the VLCT’s website, both communities will receive slightly more than the regional commission predicted, but far less than Welch announced during his virtual visit in Barre.

In Barre and Barre Town both payments combined don’t add up to what would have been the first installment based on the numbers announced by Welch.

The story is the same in Montpelier where Fraser told councilors Wednesday night they may not receive the $2.15 million they were told to expect. Barring a change, the city would receive a total of about $772,000 in equal installments of roughly $386,000.

That’s a significant drop and would necessarily alter the discussion that the council started late last month when members conceptually agreed to pursue a path use some — if not much — of the money to restore projects and purchases that were deferred to balance a pandemic-depleted budget and some on new initiatives.

Attempts to reach VLCT Executive Director Ted Brady were unsuccessful Thursday, but the organization’s website outlined the state of play for its municipal members including cities, towns and many villages that now have less than 30 days to request funds under the American Rescue Plan.

It acknowledges the uncertainty with respect to the disposition of the $121.2 million currently earmarked for the counties and efforts to persuade the Treasury Department to alter its ruling.

“Municipalities may need to take additional steps in the near future to access their share of the county funding, should it become available,” it states.

If the Treasury Department doesn’t have a change of heart?

“We anticipate many if not all Vermont counties will return most of this funding to the state,” the post on the VLCT’s website states. “However, during the 2021 Legislative session, the Vermont Legislature included a provision in the budget that requires the Legislature to determine how to spend any county ARPA funding returned to the state.”

Though that money could eventually trickle down to local communities, when and under what conditions that might happen is a huge unknown.

“In theory, the state can take this (county money) and do whatever it wants with it,” Fraser said, promising to keep councilors updated on any new developments Wednesday night. 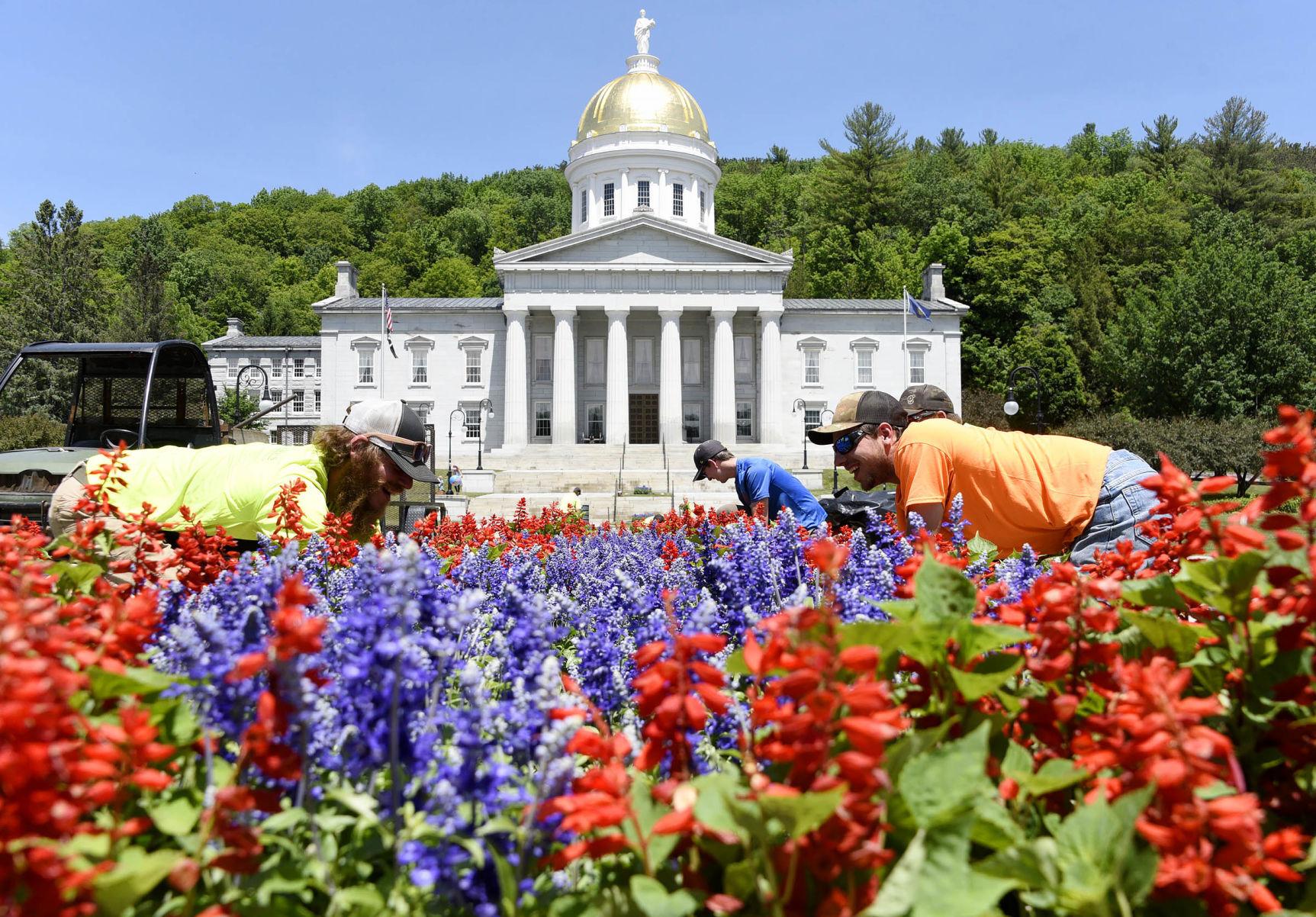 Workers from Landshapes, of Richmond, plant flowering Salvia Thursday outside the State House in Montpelier. From left are Jimmy Heinz, Ethan Hobbs and Justin Ploof.

BARRE TOWN — Fire Chief Chris Violette is steaming over the charred remains of a large wooden derrick and the dangers posed by fighting a suspicious Wednesday night fire at the edge of an abandoned quarry in the middle of the town forest.

Though Violette stopped just short of calling it arson on Thursday, how the wooden derrick — a century-old remnant of the local granite industry — caught fire Wednesday is raising questions.

“It’s pretty suspicious,” he said of the fire that was reported as a “brush fire” by a hiker who called it in shortly after 7 p.m.

Violette said firefighters responded and after searching for 20 minutes were able to find the fire in the middle of the forest with the help of a drone.

“We had to search around a little bit, but we were able to spot it from the air,” he said.

That, Violette said, was the easy part.

Getting water to the burning derrick was more challenging because forests don’t have fire hydrants, and while the abandoned quarry was filled with water, Violette said getting at it wasn’t a viable option without scaling down a rocky cliff.

Instead, Violette said firefighters had to lay 600 feet of hose from a pumper truck they parked on Capital Quarry Road to the isolated fire scene at the edge of one of many abandoned quarries in the area.

“It was a lot of work to get that amount of hose out there,” he said, noting firefighters were able to use a stretch of the “rough-cut” Ruins Trail to get water to the burning derrick as light was fading.

Violette said things didn’t get any easier as darkness descended because while the creosote-soaked wooden derrick toppled long ago, it once stood a foot from the edge of the quarry hole.

Violette said the fire’s proximity to the quarry was worrisome in daylight and downright dangerous after dark.

“It wasn’t a good situation,” he said.

According to Violette, firefighters spent roughly 2½-hours on scene — much of it focused on the old “Blondin derrick” and some spent dealing with several nearby trees that caught fire and needed to be cut down.

Though there was no obvious evidence of arson, Violette said the fire is suspicious and was reported to Barre Town police who have since visited the scene.

In addition to the dangers posed by a fire that could have gotten out of hand if the hiker hadn’t smelled smoke, Violette said it significantly damaged the old derrick, which was once used to remove grout from the quarry when it was in use. Though the 30-foot-tall derrick had fallen, he said it was still largely intact.

“It’s a pretty cool artifact,” he said. “There’s not many of them left.” 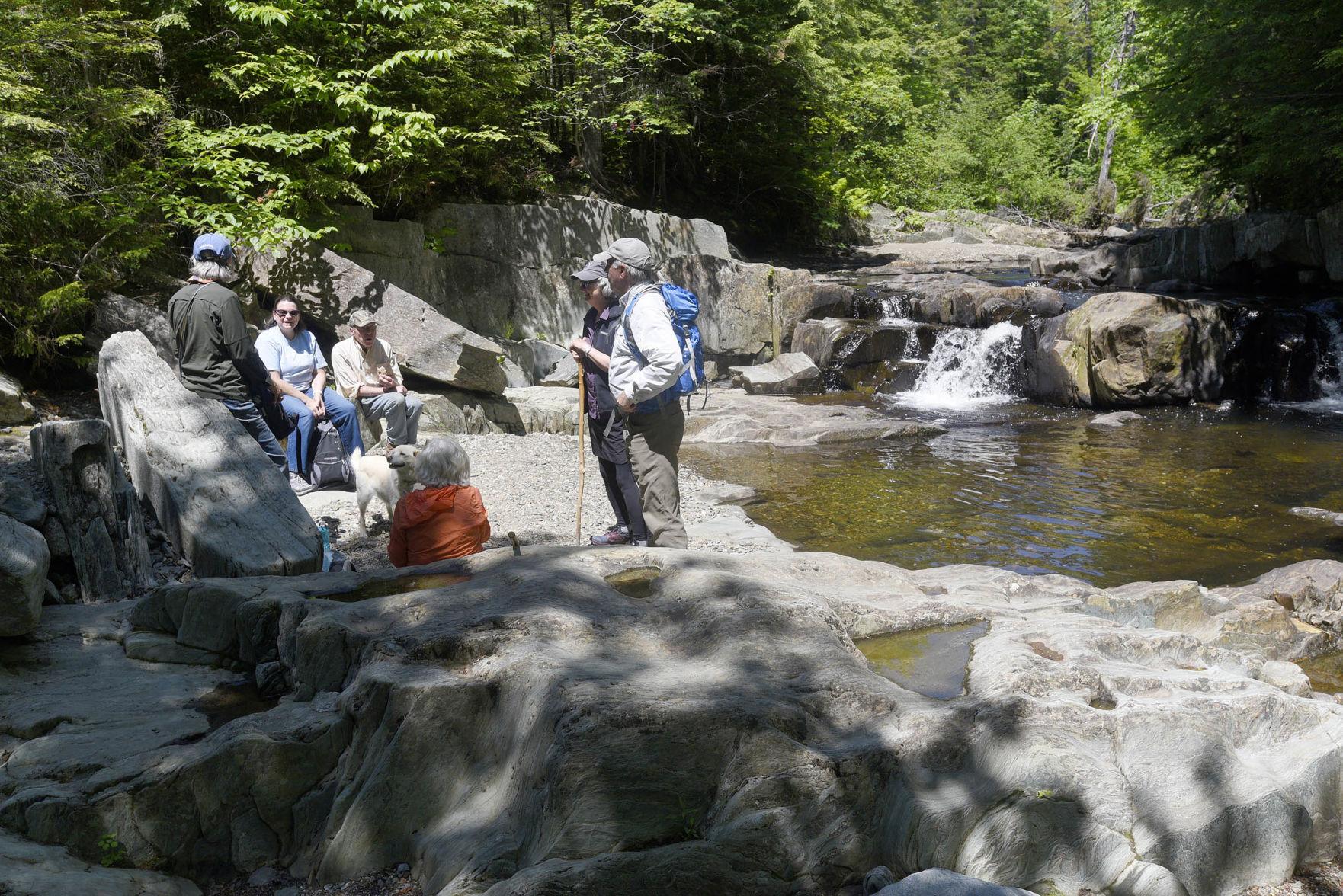 A group of walkers pauses for lunch Thursday while exploring North Branch Cascades Park in Worcester.

Perfect place for a chat

PAWLET — Daniel Banyai plans to appeal an Environmental Court ruling ordering him to shut down his firearms training school, demolish any unpermitted buildings associated with it, and pay the town $46,000.

A notice of appeal was filed with the Vermont Supreme Court on May 11 by Banyai’s attorney, Cindy Hill, of Hill Attorney PLLC, based in Middlebury.

Banyai has represented himself up until this point.

According to Hill’s notice, she intends to ask the Vermont Supreme Court to look at whether or not due process abrogated with regard to landowner notification, whether the Environmental court overstepped its authority and abused its discretion with assessing fines, whether it did the same in finding that Banyai’s activities on his property constituted a change of use, and whether the Environmental Court violated Banyai’s property rights by saying the town could require him to seek permits for activities he was already allowed to do.

“Appellant asserts no basis for disposition by the full Court,” she wrote, arguing that the issues identified by Hill hadn’t been raised before, that there’s been no new law or way to apply the law to any new facts, that there are no legal issues of public interest, no call to criticize an existing law, and does not resolve a conflict between courts.

Bent stated in an email that Hill has until July 19 to file a brief. Bent will have 21 days after that to respond, and then Hill gets 14 days to file a response to that. Either side can request an oral argument. Bent said it’s difficult to predict how long it will take the court to issue a decision.

“The Environmental Court did defer ruling on the motion for contempt until the appeal is done,” Bent stated. “In the event that Mr. Banyai persists in violating the Court’s orders, we may ask the Court to revisit it. We do think the Court has the authority to enforce its own injunction when an appeal is pending, because the rules state that injunctions stay in effect even if an appeal is filed unless a stay is granted. No stay has been requested or granted in this instance.”

According to court records, Banyai bought 541 Briar Hill Road in West Pawlet in 2013, but it wasn’t until 2017 that he began operating the Slate Ridge firearms school there. The town claims he did so without the necessary permits.

Banyai’s relationship with the town and his neighbors has been strained, with neighbors reporting they feel threatened by his behavior.

On Wednesday, Vermont State Police said they had received reports of someone believed to be Banyai recording video of the homes and businesses of some town officials. Police spoke to Banyai, who told them he was recording the community. Police said they determined that no crime had been committed. On May 25, Pawlet Select Board Chair Michael Beecher emailed Planning Commission Chair Jessica Van Oort telling her that Banyai had been seen recording near the homes and business of commission members and Development Review Board members.

A Development Review Board hearing was slated for Thursday to hear an appeal on a permit Banyai had been granted for a shed. The appeal was filed by Richard Hulett, a Select Board member and neighbor to Banyai.

Durkin took note in his decision of Banyai’s behavior with the court and dealings with town officials, writing that he’s been unduly confrontational and combative. The decision also mentioned Slate Ridge social media posts, specifically one where a vehicle was marked with “Hulett Trucking” and shot by a firearm.

Hulett’s wife, Many Hulett, applied for a restraining order against Banyai. Mandy Hulett told the court of a Slate Ridge social media post where the page was asking for a vehicle for use in firearms training that matched the make and model of one the Huletts had purchased for their daughter.

At a Dec. 16, 2020, merits hearing, Banyai refused to testify at cross-examination and didn’t participate in the rest of the hearing.

The concern over when Gov. Phil Scott decides to lift the emergency order proved to be a rallying cry for our state’s most vulnerable population.

Montpelier and Burlington face off in the Division I girls Ultimate state championship. B1