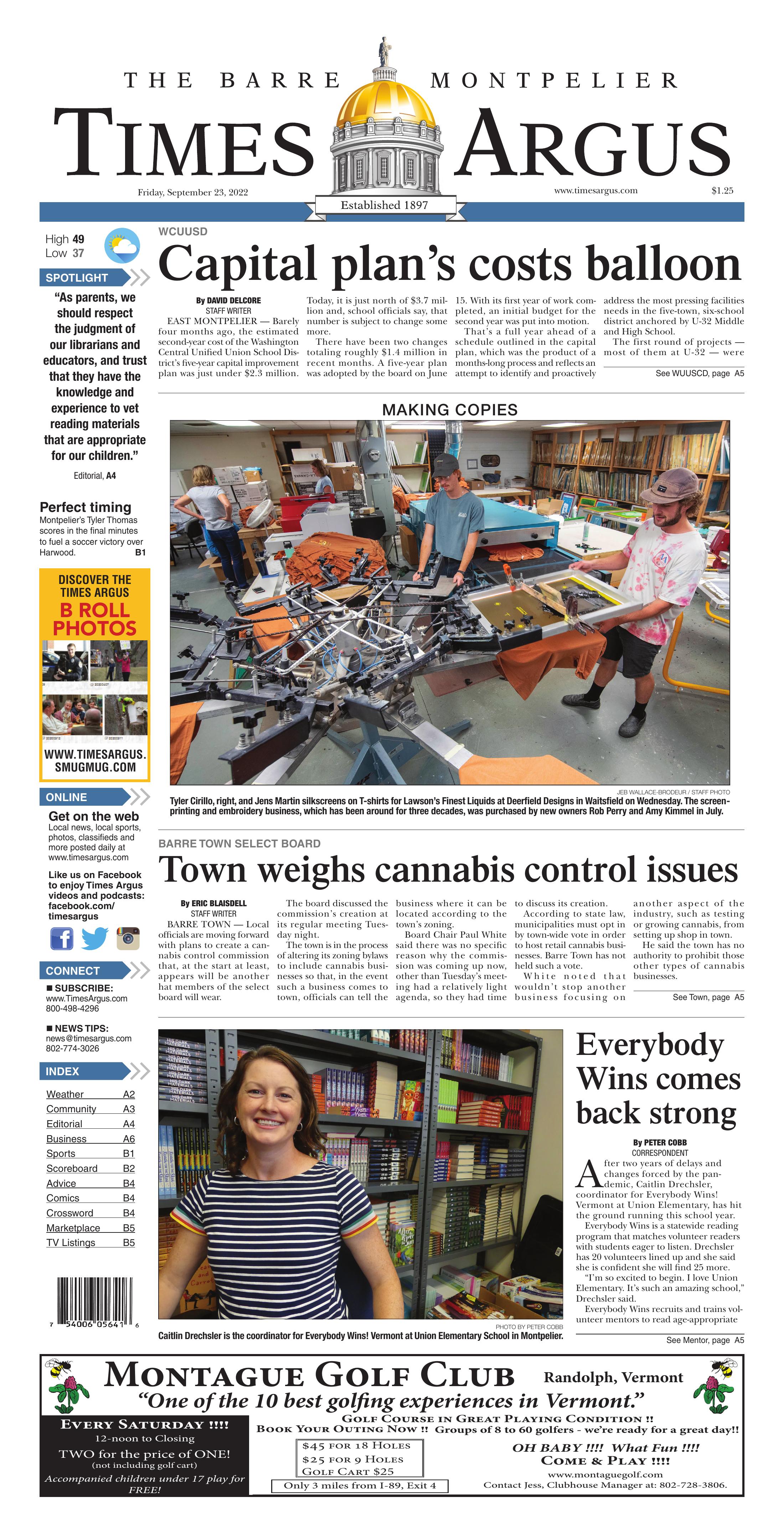 EAST MONTPELIER — Barely four months ago, the estimated second-year cost of the Washington Central Unified Union School District’s five-year capital improvement plan was just under $2.3 million. Today, it is just north of $3.7 million and, school officials say, that number is subject to change some more.

There have been two changes totaling roughly $1.4 million in recent months. A five-year plan was adopted by the board on June 15. With its first year of work completed, an initial budget for the second year was put into motion.

That’s a full year ahead of a schedule outlined in the capital plan, which was the product of a months-long process and reflects an attempt to identify and proactively address the most pressing facilities needs in the five-town, six-school district anchored by U-32 Middle and High School.

The first round of projects — most of them at U-32 — were wrapped up in rapid fashion over the summer.

Work on the high school roof was completed; so was a planned stormwater project. There a new dugouts on the U-32 softball field; a couple of new scoreboards were installed; two restrooms were renovated; and drainage work was completed on the field hockey field.

Add to that accessibility-related improvements to a restroom at Rumney Memorial School in Middlesex; and a ventilation upgrade to the kindergarten classroom at Calais Elementary School.

Facilities Director Chris O’Brien told board members the capital plan got off to a solid start.

“I feel pretty lucky,” he said, noting other districts struggled to complete projects at a time when contractors were in high demand.

With year one essentially done, the board is focused on year two — a process that Business Administrator Susanne Gann said Thursday is well ahead of schedule.

Rising costs aside, Gann said, the district is on track to solicit bids for a pair of pricey projects later this year.

“It sets us up for a bigger pool of contractors looking for work next summer,” she said.

The year two planning began before the board adopted the five-year plan. The board tentatively set the budget for the flagged projects at just under $2.3 million on May 18.

At the time, best estimates suggested a proposal to reconfigure the entrance at U-32; repave the high school’s two largest parking lots; and replace its sidewalks during the fiscal year that starts next July would cost a little over $1.6 million.

A month later, the board received a revised estimate that pushed the projected cost of the project to nearly $2.1 million. The board included that not-to-exceed number in a motion that authorized the necessary work be done to put the parking lot project out to bid.

As a result, the tentative budget for the second year of the capital plan swelled to nearly $2.8 million, which is where it stood heading into Wednesday night’s meeting.

By the time the meeting was over, the budget had ballooned to $3.7 million.

Gann said the $1 million increase doesn’t reflect a bad estimate, but a significant expansion in the scope of work with respect to replacing roof-mounted heating, ventilation and air conditioning units at U-32.

According to Gann, the initial $250,000 estimate contemplated a “partial replacement,” while the new figure — nearly $1.3 million — assumes all seven of the school’s HVAC units will be replaced.

Those units, board members were told, are nearing the end of their useful lives; the vendor that manufactured them is no longer in business, and finding parts to repair them is problematic.

As they did with the parking lot project in June, the board authorized the necessary work be done to solicit bids for the project with a not-to-exceed cost of roughly $1.3 million. That number includes a 10% contingency and 25% in “soft costs” associated with preparing bid-ready documents.

The vast majority of the money would be spent replacing the HVAC units at U-32, but the project also includes replacing a circulator pump for the high school’s boiler and the damper on an air handling unit at Doty Memorial School in Worcester.

Board members briefly discussed using what remains — approximately $795,000 — of pandemic-related federal funding the district received to cover the increased expense associated with a 20-year upgrade.

Though no final decision was made, Chair Flor Diaz-Smith suggested the ventilation upgrade would be a good use of the one-time money.

Gann agreed: “It’s exactly the type of thing that grant money was meant for.” 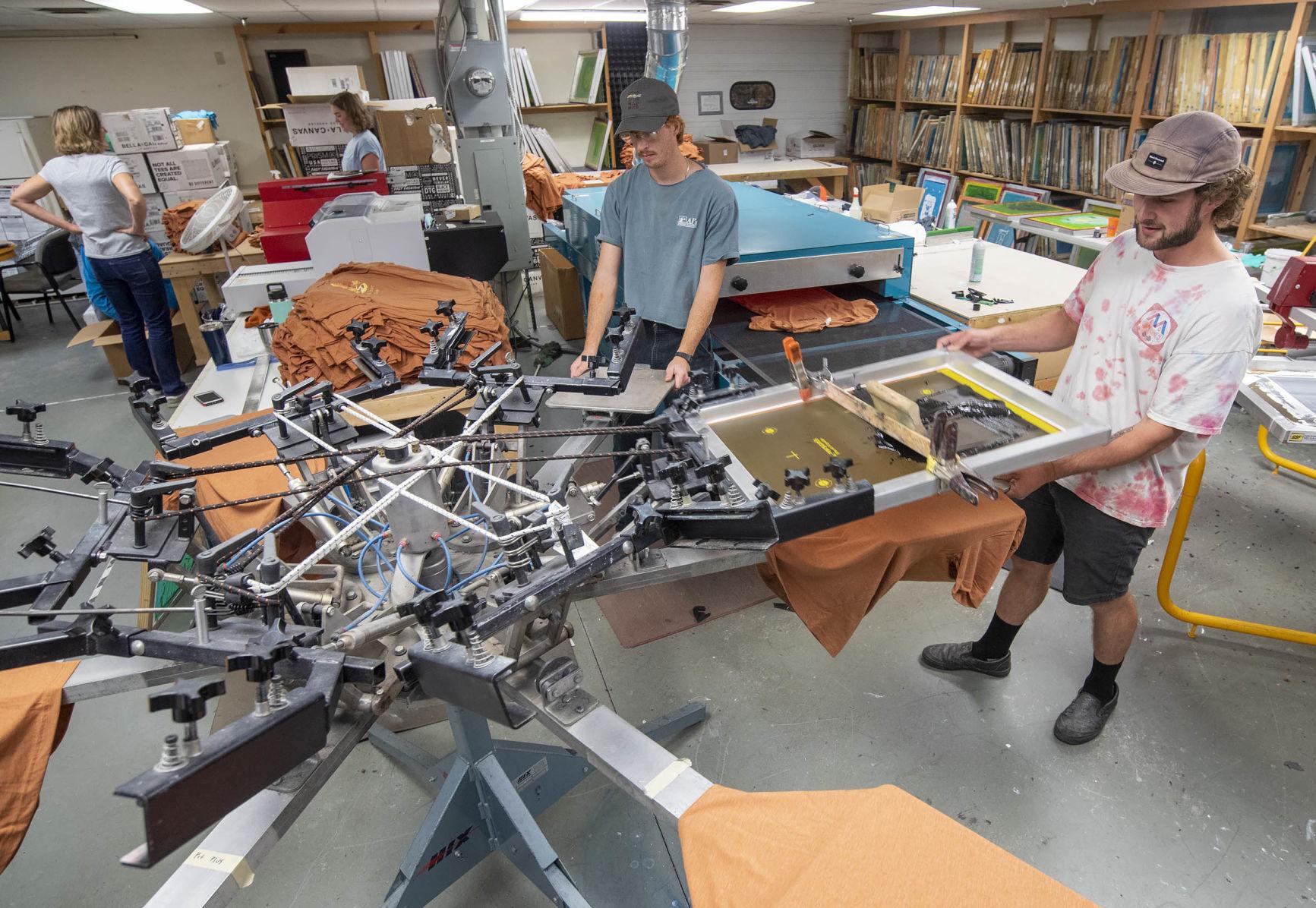 Tyler Cirillo, right, and Jens Martin silkscreens on T-shirts for Lawson’s Finest Liquids at Deerfield Designs in Waitsfield on Wednesday. The screenprinting and embroidery business, which has been around for three decades, was purchased by new owners Rob Perry and Amy Kimmel in July.

BARRE TOWN — Local officials are moving forward with plans to create a cannabis control commission that, at the start at least, appears will be another hat members of the select board will wear.

The board discussed the commission’s creation at its regular meeting Tuesday night.

The town is in the process of altering its zoning bylaws to include cannabis businesses so that, in the event such a business comes to town, officials can tell the business where it can be located according to the town’s zoning.

Board Chair Paul White said there was no specific reason why the commission was coming up now, other than Tuesday’s meeting had a relatively light agenda, so they had time to discuss its creation.

According to state law, municipalities must opt in by town-wide vote in order to host retail cannabis businesses. Barre Town has not held such a vote.

White noted that wouldn’t stop another business focusing on another aspect of the industry, such as testing or growing cannabis, from setting up shop in town.

He said the town has no authority to prohibit those other types of cannabis businesses.

White said the town can create a local cannabis control commission in order to participate in regulating the industry.

The board could create a new standalone commission if it so chooses, or it could make itself the commission. Board members said they supported taking on the new role for now, but left the possibility open for creating a separate commission if the work becomes too much for them to handle.

Town Manager Carl Rogers said the commission can regulate cannabis establishments through the town’s zoning, through sign regulations and through a public nuisance ordinance.

Town officials noted the town can’t create an ordinance targeting cannabis businesses, so whatever ordinance it creates would be applied across all types of businesses. The example given was an issue with odor at a cannabis business would need to be handled the same as odor from a bakery or coffee-roasting business.

The commission also can deal with local licenses. White said the town’s license would “piggy back” on the state’s license.

Board member Justin Bolduc said he’s learned if the town does not have a local commission in place, the state Cannabis Control Board will not let the town know about a license for a Barre Town business until it has already been issued. Though town officials noted the business would need to go in front of the town’s Development Review Board in order to get a conditional use permit to operate in town, per the proposed zoning bylaw changes.

White said he would be inclined to create the commission, if for no other reason than to stay informed. Other board members agreed.

Cedric Sanborn, chair of the planning commission, said the commission deals with zoning and the DRB deals with implementation. Sanborn said this cannabis control commission would help fill in the rest of the regulatory gaps.

“So we would have a pretty good idea of what’s going on in the world of cannabis in our town,” he said.

The board would need to pass a resolution to create the commission. Such an action is expected at next week’s regular board meeting. Rogers said town staff would work on a license application for the board to review.

“As parents, we should respect the judgment of our librarians and educators, and trust that they have the knowledge and experience to vet reading materials that are appropriate for our children.”

Montpelier’s Tyler Thomas scores in the final minutes to fuel a soccer victory over Harwood. B1