BARRE — The tax rate used to calculate property tax bills paid by Granite City homeowners would increase more than 19 cents if voters approve municipal and school budgets that will be on the Town Meeting Day ballot.

Both budgets — one recently adopted by the Barre Unified School Board and the other just blessed by city councilors — were discussed during the council’s virtual meeting Tuesday night.

Based on best estimates most of the increase — 13 cents — can be traced to the $50.5 million school spending plan that voters in Barre and Barre Town will collectively consider March 2.

The balance — a hair more than 6 cents — is tied to the $12.8 million budget proposed by City Manager Steve Mackenzie and unanimously endorsed by city councilors Tuesday night.

That pushed the projected increase to around 19 cents, and would pad a tax rate that is already among the highest in the state. The combined rates — one set by the council to cover municipal expenses and the other by the state for school purposes — sit at just less than $3.36-per-$100 assessed property value. The projected rate would climb to nearly $3.55-per-$100 assessed property value.

The projected 19-cent rate increase comes on the heels of the 17.5-cent spike that accompanied approval of municipal and school budgets last year. If estimates are accurate, that’s a two-year increase of roughly 36.5 cents with nearly 25 cents tied to the homestead education rate that is set by the state and the remaining 11.5 driven by city spending.

The council concluded virtual budget deliberations that started last October, by expressing their support for the $12.8 million spending plan recommended by Mackenzie.

The proposed budget calls for spending less than the $13 million version voters approved last March, but roughly $274,000 more of $12.6 million version councilors approved in response to the pandemic-related loss of more than $450,000 in revenue.

Mackenzie described the budget as “reasonable and responsible,” noting it includes a now-planned transition from the city’s contract assessor to a new full-time position. The $40,000 expense will reflected in the latest and last draft of Mackenzie’s budget will be more than offset by freshly projected savings — $43,000 — in premiums the city pays for workers compensation and property and casualty insurance.

The lingering effects of the COVID-19 crisis have prompted Mackenzie to use conservative revenue estimates that will require — a move that is partly responsible for the increase in property tax support needed to finance the city’s operation. A year ago, voters approved a not-to-exceed-figure of just more than $9 million. The comparable figure that will be on the ballot in March is more than $9.3 million — an increase of roughly $267,000.

That’s better than Mackenzie’s earlier forecasts and, he told councilors, probably as good as it gets while maintaining a full-service city.

“I think it’s as affordable as we can make it,” he said.

While the 6-cent rate hike — a 3.1% increase — is higher than Mackenzie would like, it’s lower than the 7-cents he was projecting a week ago before making some last-minute refinements.

It was good enough for councilors who have had very little to say about the spending plan as it has come into sharper focus and unanimously endorsed the proposal during Tuesday night’s meeting.

Earlier in the evening, School Director Sonya Spaulding walked councilors through a school budget proposal that she said reflected the School Board’s attempt to balance affordability and educational opportunity in the pre-K-12 district.

The school spending proposal reflects an increase of just more than $2 million, or 4.1%, over the $48.5 million budget voters approved a year ago. The increase is significantly lower than administrators initially proposed and while the district’s spending per equalized pupil is forecast to climb nearly 5.6% that $15,881 figure is among the lowest in the state.

With personnel costs accounting for roughly 75% of school spending and the cost of health insurance climbing, Spaulding said limiting the budget increase was a challenge this year and a modest dip in the city’s common level of appraisal contributed to the projected 13-cent tax rate increase.

Spaulding stressed the projected rate hike is a best estimate and could change depending on decisions the Legislature will make in coming months.

The mayor praised the School Board for its work on a budget. 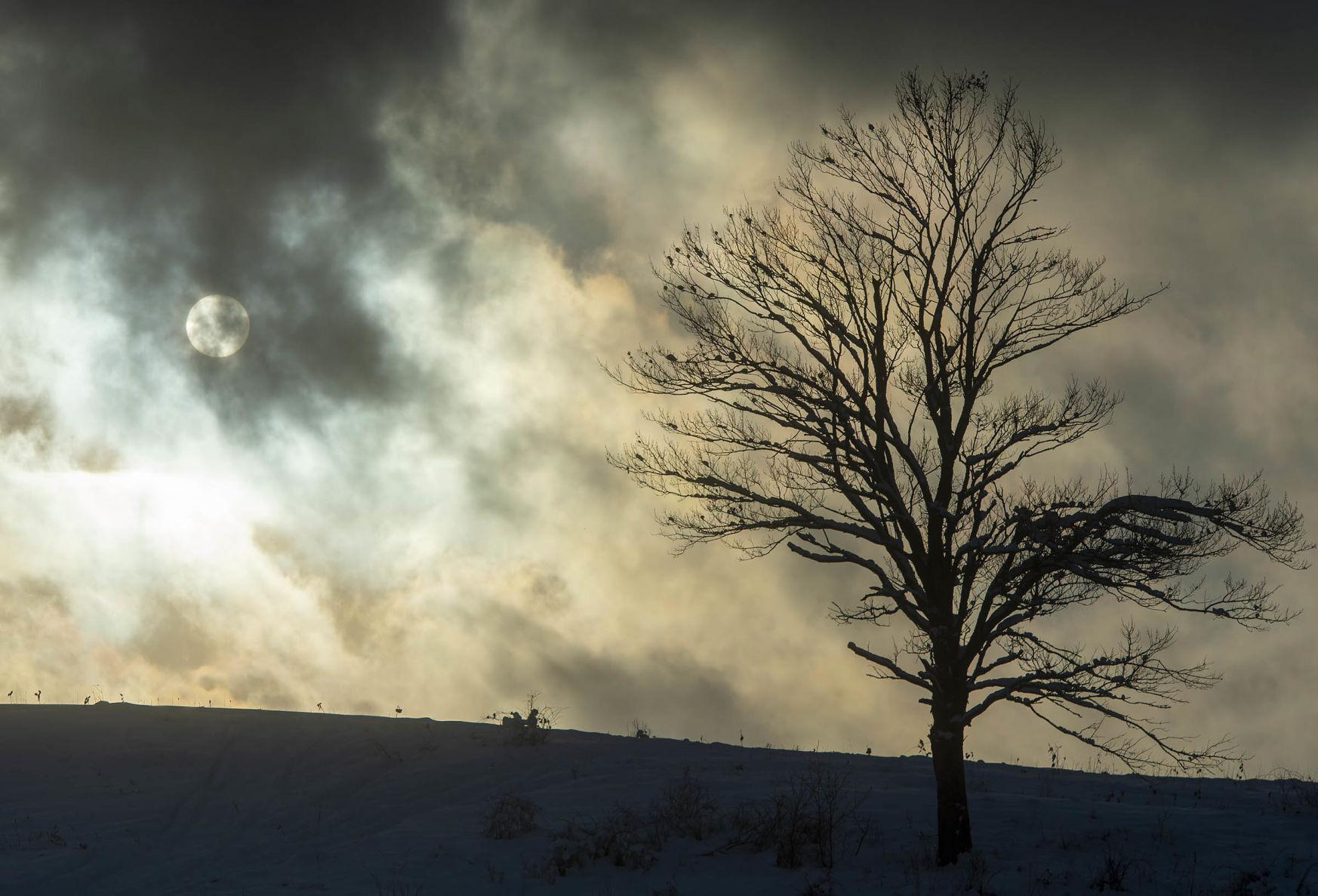 A tree is silhouetted in Barre Town Wednesday as the sun gets obscured by snow clouds.

“The day that dawned is one we will not soon forget. What we saw over the course of the day (an into the evening) were many examples of bright people with hopes for brighter days. And that is lighting the way toward hope.”