BARRE — A Plainfield teenager has denied attacking another teenager with an aluminum baseball bat.

Nathan R. Deforge, 16, pleaded not guilty Wednesday in Washington County criminal court to a felony count of aggravated assault with a deadly weapon. If convicted, Deforge faces a maximum sentence of 15 years in prison. He was released on conditions including a 24-hour curfew and he has to stay 300 feet away from Twinfield Union High School.

Trooper Mathew Nadeau, of the Vermont State Police, said in his affidavit he received a report Tuesday from the victim’s father stating the 18-year-old victim had been taken to Central Vermont Medical Center because he had been hit in the groin by a baseball bat. Nadeau said the incident occurred at the baseball fields at Twinfield. He said the victim had been attacked by classmate later identified as Deforge.

Nadeau said he went to the hospital and spoke to the victim who reported he was with his baseball team at the school taking part in warm ups when the incident occurred. The victim told Nadeau he had his back to Deforge when Deforge came up to him and hit him in the thigh and groin with a baseball bat. He told Nadeau he immediately fell to the ground and a friend helped him to a vehicle and took him home.

Nadeau said he asked the victim why Deforge attacked him and he reported Deforge had recently broken up with a girl and the victim had started seeing her. Deforge was upset about this, according to court records.

Nadeau said he went to the school where the baseball game was still going on and spoke to two witnesses of the assault. One witness gave Nadeau the same account the victim had. The witness told Nadeau after hitting the victim with the bat Deforge threw the bat towards the victim’s head, muttered something under his breath and walked away. The second witness confirmed what was reported about the assault, according to court records.

Nadeau said he later learned the victim suffered bruising to his thigh and groin as well as a small open wound.

Mark Tucker, the superintendent of Washington Northeast Supervisory Union which oversees Twinfield, released a statement Thursday saying, “I can confirm that there was an incident at Twinfield Union High School involving physical aggression. Under federal privacy laws, I cannot disclose the identity of the students involved or discuss the specifics of the incident. The police have been notified and have taken appropriate action. We are cooperating with law enforcement.

“The District does not tolerate violence in our school. If we learn of possible violence, we conduct an investigation into the facts and where allegations are substantiated we impose serious discipline, sometimes expulsion. The safety of our students is our highest priority.” 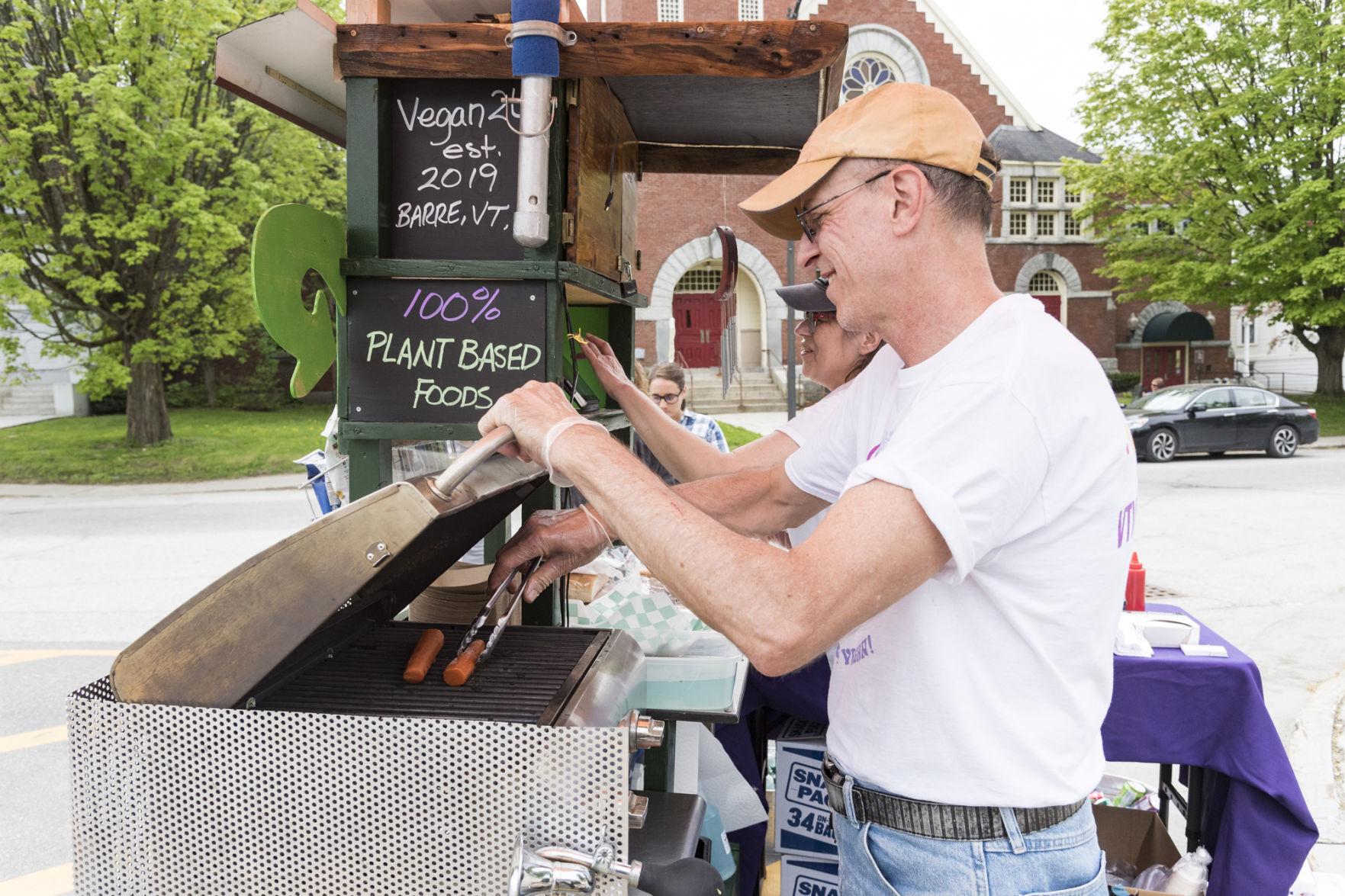 Chris Brzezicki grills some carrot dogs with his wife Carol as their new food cart Vegan2U celebrates their first day of operations at Barre’s City Hall Park on Thursday. Going forward the cart will be open 11 a.m. — 3 p.m. Monday thru Friday.

BARRE — A Wheelock man is accused of pleasuring himself inside the Kohl’s store in Berlin.

Shawn Ramsey-Digiulio, 25, pleaded not guilty Thursday in Washington County criminal court in Barre to a felony count of lewd and lascivious conduct and a misdemeanor count of unlawful mischief. If convicted, Ramsey-Digiulio faces a maximum sentence of 5½ years in prison. He was released on conditions.

Officer Daniel W. Withrow, of the Berlin police, said in his affidavit he received a report May 17 about a man who had been pleasuring himself inside the store. Withrow said he went to the store and spoke to an employee who showed him surveillance footage of the store and the male in question who was later identified as Ramsey-Digiulio.

Withrow said two shirts that Ramsey-Digiulio wiped his hands on were later seized as evidence and were valued at $19.98 total.

Withrow said Ramsey-Digiulio was located at another Kohl’s on May 19. This one was in South Burlington, according to court records. He said the same employee that he spoke to in Berlin was working at that store, saw Ramsey-Digiulio and thought he was going to pleasure himself again until police arrived and cited him.

The following is a sampling of calls to Montpelier police in recent days.

A mother and child were crossing a crosswalk on Berlin Street.

On Bailey Avenue, a welfare check was conducted.

Vehicles were not heeding “Do not enter” signs on Ridge Street.

An attempted burglary was reported on Pioneer Street.

On Main Street, a dog was lost or found.

Property was found on Main Street.

A suspicious male was reported at North Branch Nature Center.

On Memorial Drive, a vehicle broke down.

A traffic hazard was reported on Granite Street.

On Barre Street, a package was stolen.

A dog was running loose on Berlin Street.

There was a suspicious person on Barre Street.

There was a suspicious event on Langdon Street. No further information was provided.

Property was found on State Street.

A dog was running loose on Memorial Drive.

Property was found on Barre Street.

Items were stolen from a building on State Street.

Property was found on State Street.

Someone refused to get off a bus on Main Street.

Two people were drinking from a bag and smoking from a pipe on Barre Street.

Kids were under a bridge on Main Street.

A young girl was crying on State Street.

A water leak was reported on College Street.

A dog was found on Northfield Street.

Property was found on Memorial Drive.

Property was lost or found on State Street.

A dog was being mistreated at Jacob’s Lot.

Someone left a refrigerator on the side of Gould Hill Road.

After considering a variety of new taxes to fund water quality efforts in Vermont, lawmakers now say they can clean up the state’s waterways without raising a dime.

Lawmakers have spent the past four years trying to find a long-term funding mechanism for a water quality initiative that’s expected to cost about $2 billion over the next 20 years. As recently as last week, they were contemplating several revenue proposals, including a sales tax on certain services offered by technology companies.

“Our strategy is never to be ‘tax first, figure out how to spend it later.’ If the dollars are available to meet the needs, then that’s great,” Ashe said Tuesday.

It’s a remarkable turnabout for a Legislature that had, until recently, criticized Gov. Phil Scott’s proposal to pay for water quality activities with existing state revenues.

Ashe said news of the surplus has altered the fiscal landscape, and he said that’s allowed lawmakers to solve their water quality dilemma without raising new taxes.

“Anyone who observes the legislative process knows that any new revenue source that’s put on the table is vehemently opposed by some constituency,” Ashe said.

“It’s, you know, literally the old saying of moving the deck chairs on the Titanic,” Torti said.

Now, legislation approved by the full Senate on Tuesday technically does create a long-term revenue source for water quality funding: It does so by changing state law, so that 6% of the existing rooms and meals tax will now go to a clean water fund every year.

However, Torti said, there’s no guarantee that surpluses will be available to fill that gap.

“You can’t do this in one-year tranches,” Torti said. “It is feckless fiscal policy.”

Torti’s own organization lobbied heavily against some of the water quality tax proposals floated by lawmakers this year. He said he prefers a per-parcel fee on every landowner in the state, a proposal that has failed to gain traction in the Legislature.

Calais Rep. Janet Ancel, who chairs the House Committee on Ways and Means, said the revenue jump that fueled the surplus this year is not a one-time phenomenon.

Ancel said analysts think Vermont will see ongoing revenue jumps of about $15 million annually — not just in the next fiscal year, but into the future. She said that ongoing revenue growth mitigates the risk associated with the Legislature’s approach.

“If there’s money available in fiscal [year] ‘20 and ongoing that we feel reasonably assured about, I think it’s a reasonable solution,” Ancel said Tuesday.

Jon Groveman, with the Vermont Natural Resources Council, said his organization is happy to see lawmakers allocate increased funding for water quality activities, but he said the decision not to create a new revenue source to pay for it makes that funding tenuous.

“So if there’s a gap in the budget or we hit a recession, you know, there’s going to be pressure to reallocate that money,” Groveman said. “That’s the reality of it.”

The Scott administration has yet to weigh in on the Legislature’s latest funding plan.