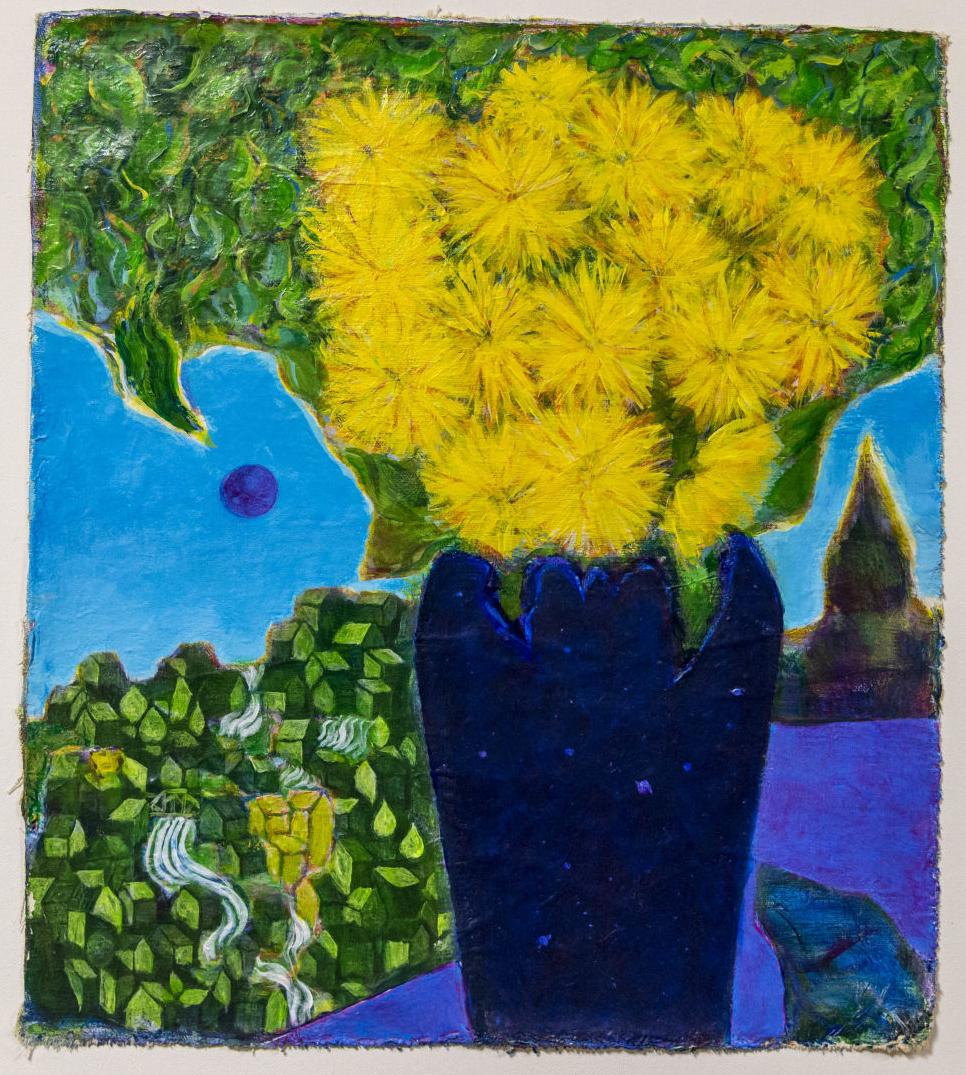 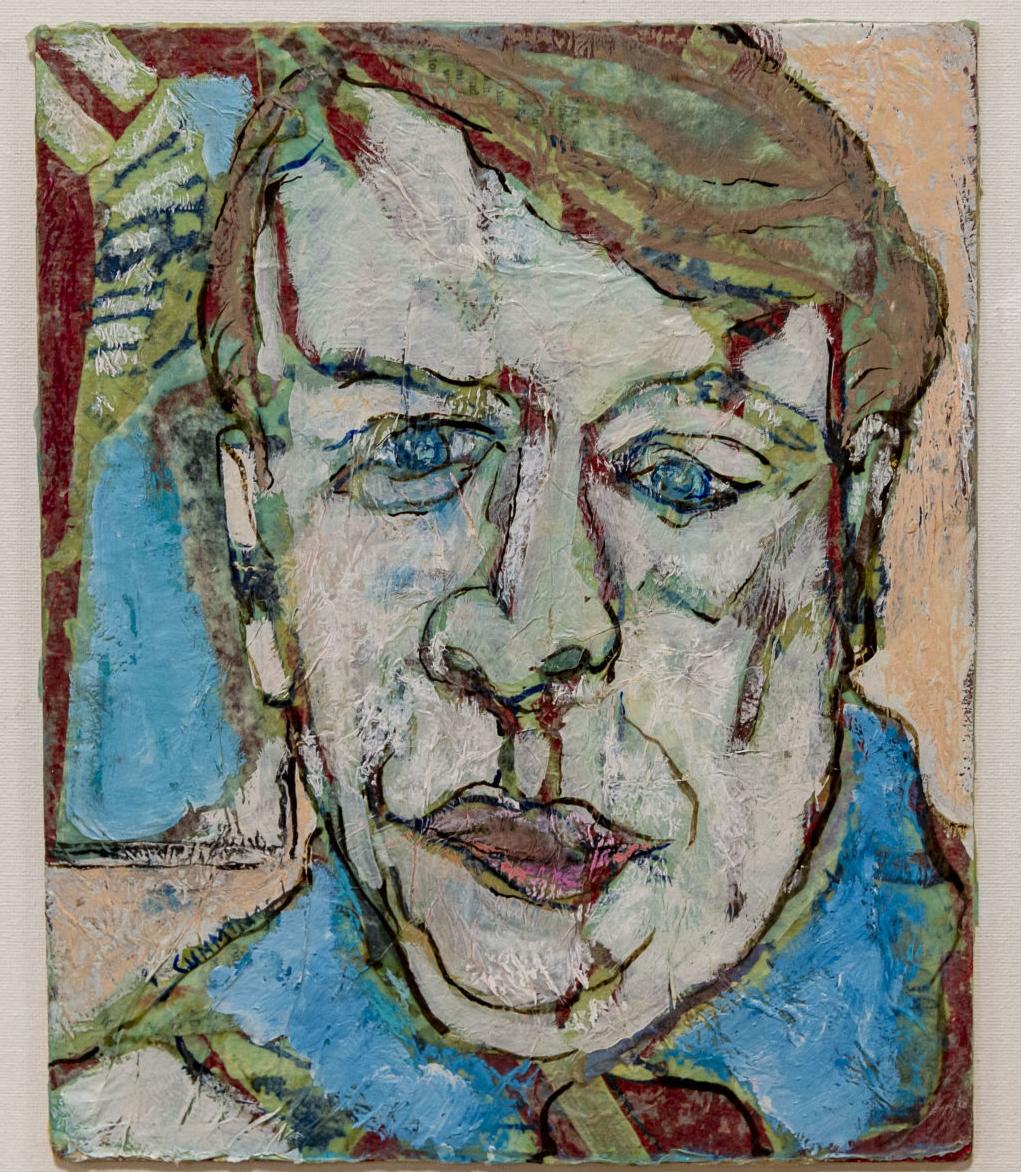 Walk into the lobby of Central Vermont Medical Center these days and be greeted by flowers — paintings of bouquets of sunflowers, poppies, hydrangea, irises. These though, are not simple still lifes. The flowers in their vases, most large-scale filling the paintings, float above or sit amid abstracted landscapes. The bright, living flowers radiate, evoking a sense of greater meaning and tranquility.

These blooms are among the paintings by Regis Cummings in his solo exhibition “Flowers, Faces, Familiar Places” in The Gallery, located in the lobby of CVMC in Berlin. Over three dozen paintings, all acrylics, are in the show, which continues to March 21.

True to its title, the show is not all flowers. It also features landscapes, including a series of lovely detailed views of Montpelier, and a number of portraits — a rabbi, a monk, a Hungarian freedom fighter among them.

“There are surprises in Cummings’ paintings. You think you’re looking at a still life and then look closer and there’s a magical sense to them. He somehow captures a spirituality akin to what Chagall imbues in his paintings,” said Maureen O’Connor Burgess, curator of The Gallery at CVMC.

“Regis has an interesting range. I love his portraits. They have a presence. You feel that they’re looking at you,” Burgess said.

Cummings, who lives in Montpelier, has been painting for a half century. Originally from Pittsburgh, Cummings and his wife Ann moved to Vermont in the mid-1970s.

In 1984, after four years of study and preparation, Cummings was ordained a permanent deacon in the Catholic Dioceses of Burlington and assigned to the Saint Augustine parish in Montpelier. As a deacon, he preaches, teaches, baptizes, witnesses marriages, conducts funeral services and more. He often works with people who are hospitalized, in care, or approaching the end of life.

Cummings’ faith and compassion are foundational to his artwork. His paintings often evoke a sense of the sacred.

“I consider myself to be a self-directed and educated studio artist who has evolved and developed over 50 years by studying other artists’ work. I have been especially influenced by the Impressionists and also by the work of Marc Chagall,” Cummings says in his artist’s statement.

“Chagall’s blending of the sacred and the ordinary, and the sacredness of the ordinary in everyday life, speaks volumes to me, and has informed my understanding and ability to reflect on the meaning and purpose of religion, myth, politics, and art … in ordinary life,” he notes.

The flower series, a theme Cummings has explored for many years, grew out of his interest in the 13th century theologian, philosopher and mystic, Meister Eckhart, and his poetic expression of God in the green and flowering.

In “Flowers of Hope in the City,” a profusion of anemones fill the sky over an urban skyline as a river flows between the viewer and the metropolis. In “Spiritual Bouquet with Sunflowers,” saffron blossoms in a glass vase float over a waterway bisecting an almost cubist village of stone grey houses. Along with the flowers, water is a frequent element in Cummings paintings, a symbol of healing and renewing.

Landscapes in the show include paintings inspired by New England’s coast, the countryside of Ireland, and a series of views of Montpelier. The Montpelier scenes, from an elevated perspective, have the realism of recognizable buildings and landmarks along with Impressionistic sky, trees, and background hills and mountains.

“A Winter Afternoon, Montpelier,” was the first in the series, done for a competition for the christening of the U.S. Navy submarine U.S.S Montpelier, launched in 1991. According to tradition, when a ship is named for a city, the city gifts a painting of itself to the captain and crew. Cummings’ winter painting was selected, but there was interest in even brighter color, perhaps given the artwork’s underwater destination. Cummings then painted “Early Spring, Montpelier.”

A print of the spring painting is in the show, because, Cummings explained, “The original is floating around the world with the crew.”