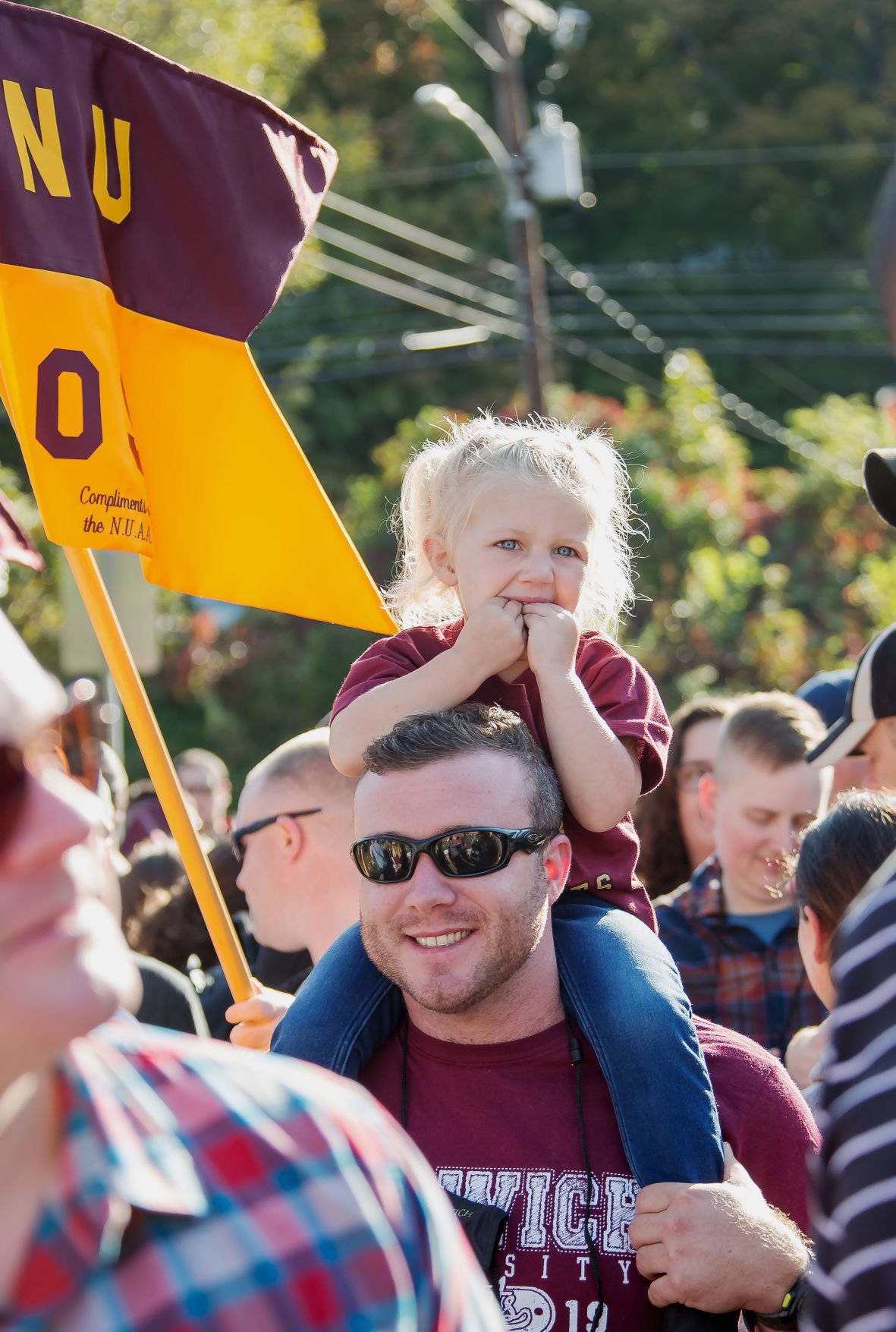 Michael Self, a member of the Norwich University Class of 2009, waits for the parade to start with his daughter, Sophia. Self currently resides in Knoxville, Tennessee. 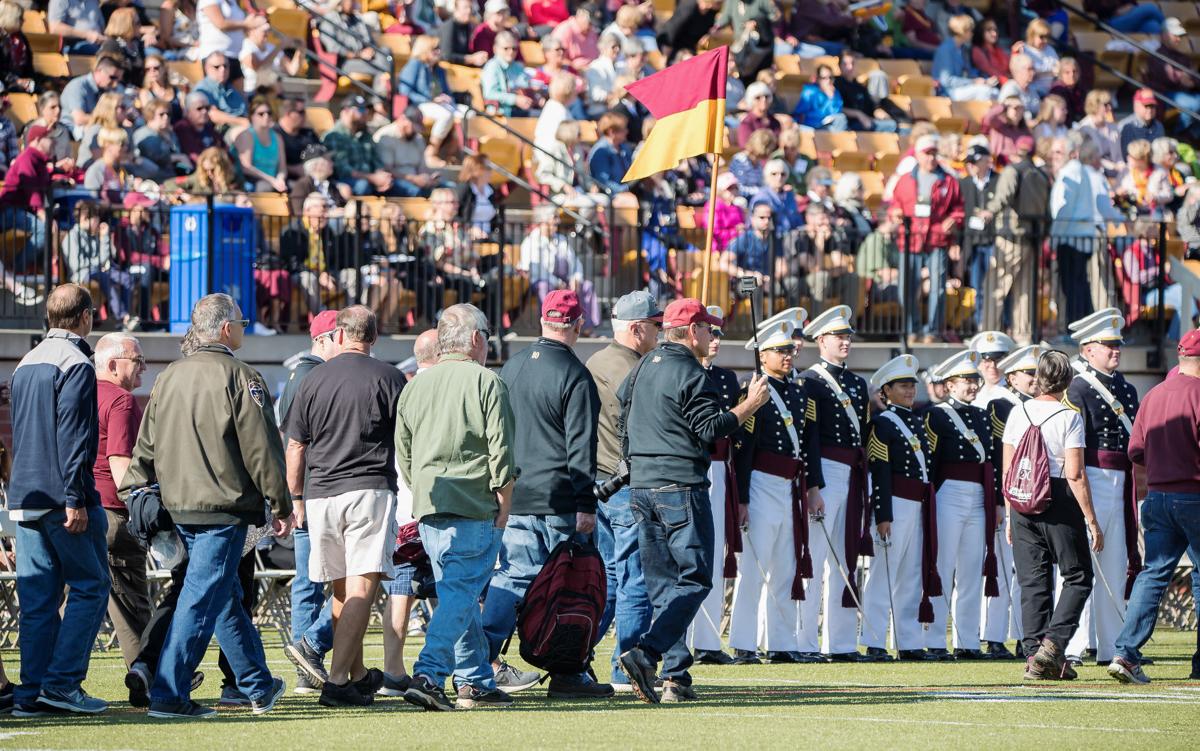 Festivities from the Norwich University Alumni Parade are seen Saturday at Sabine Field. 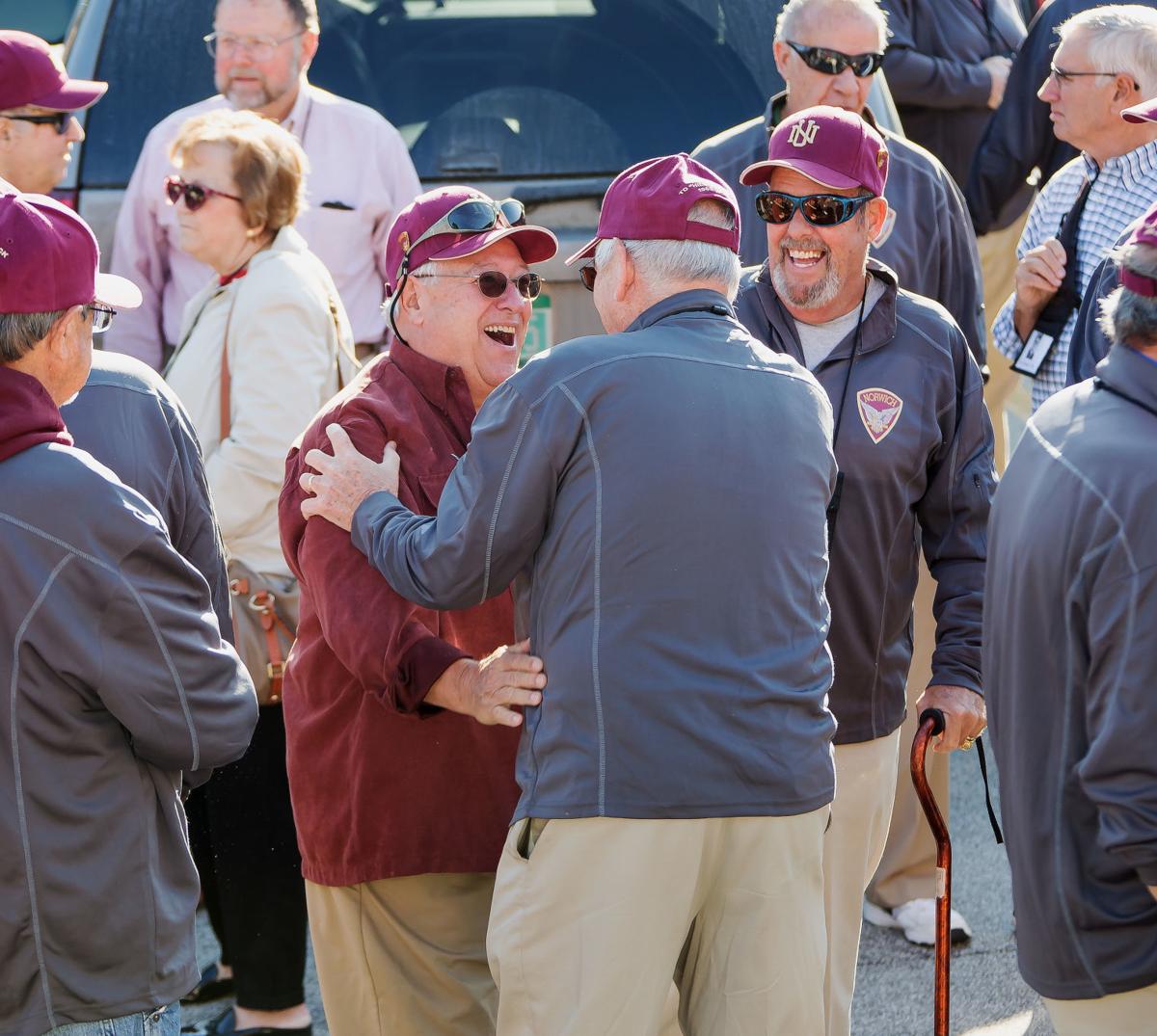 Philip Young and Henry Hogan III, members of the Norwich University Class of 1969, greet each other before the Alumni Parade on Saturday.

Michael Self, a member of the Norwich University Class of 2009, waits for the parade to start with his daughter, Sophia. Self currently resides in Knoxville, Tennessee.

Festivities from the Norwich University Alumni Parade are seen Saturday at Sabine Field.

Philip Young and Henry Hogan III, members of the Norwich University Class of 1969, greet each other before the Alumni Parade on Saturday.

A parade on NU’s Sabine Field honored alumni who traveled from across the globe, and their service defending the United States and preserving peace. NU also honored Schneider with an honorary alumni award ahead of his departure in May after 28 years’ service. A successor is expected to be announced in the new year after a national search.

To begin the morning ceremony, the NU Corps of Cadets and the Vermont color guard marched onto the football field to music by the regimental band — the oldest collegiate band in the country at the nation’s oldest private military academy, and the home of the Reserve Officer Training Corps, started in 1916. The receiving line included Schneider; Col. William Lyons, president of the NU Alumni Association; Alan DeForest, chairman of the NU board of trustees; and Frank Vanecek.

Veteran alumni who marched onto the field included Salvatore Simeone, 97, class of 1944, from Stuart, Florida, and Eugene Ward (‘49).

The Class of 1954 celebrated its 65th reunion, while the Class of 1969, celebrating its 50th reunion, was formally welcomed into NU’s Old Guard and presented with brass medallions in recognition of the milestone.

There were some other milestones of note, too.

Hor Tek Lip (‘81), was honored as the alumnus who traveled the greatest distance — nearly 9,000 miles, from Malaysia — to attend the ceremony.

Schneider noted that the five-year bicentennial capital campaign to raise $100 million had already reached $118 million as of August, with donations still coming in.

Schneider said that the Corps of Cadets stood at 1,600 cadets, with the civilian student body swelling the university’s ranks to 2,400.

“These students will be leading deep into this century,” Schneider said.

Schneider also welcomed Rear Admiral Bill Kelly, the new superintendent of the Coast Guard Academy, where Schneider first began his military career as an ensign and served eight years of active duty, including a tour in Vietnam.

“He brought the mug to give to us this afternoon,” said Schneider, to cheers and applause.

“I have been here seven times longer than I was a cadet at Coast Guard Academy — I’ve been with you 28 years,” Schneider said.

Schneider went on to list some of the upgrades and improvements at NU during its bicentennial capital campaign.

The bicentennial is the culmination of a five-year Forging the Future fundraising campaign to raise $100 million for new construction and renovation of campus facilities and boost the university’s endowment fund. Construction included the new $24 million Mack Hall dedicated a year ago — a 58,000-square-foot, four-story learning center with a high-tech, cyber-security war room, interactive classrooms, study spaces, pocket lounges and a 400-seat auditorium and performing arts center.

Another $25 million paid for renovations to Webb, Dewey and Ainsworth halls; $8.5 million was spent to renovate Kreitzberg Library; and additional money funded improvements to the Upper Parade Ground and built a Bicentennial Staircase near the Sullivan Museum to honor trustees, donors and students.

Schneider noted that NU is ranked second in the country for its cyber-security program.

“We could not do this without resources, without money. You are the enablers. We cannot do this without you. You are mission-critical to Norwich, today and tomorrow, and for you young ones for the next 50 years,” Schneider told donors and supporters of NU.

Schneider concluded by asking alumni, cadets and students to be “just as supportive” of the new president who would succeed him.

“That’s what I need from you — then we need your first-born and your annual gift,” he said, to more laughter. “Thanks for all your support over 28 years. Norwich forever!”

After the ceremony, NU alumnus Carlos Pinkham (‘65), aged 76, said he followed in his father’s footsteps to NU.

“It’s always good to see my old classmates and it’s good to see, despite I live in Northfield, I don’t get to see the cadets marching and the people in the army I can see at homecoming,” Pinkham said.

“This (bicentennial) is very important for us. It makes us even prouder of the unique institution we are a part of and the leadership heritage that we have received from those who have gone before, and the potential future of what this university is going to become and can offer to the country,” Pinkham added.