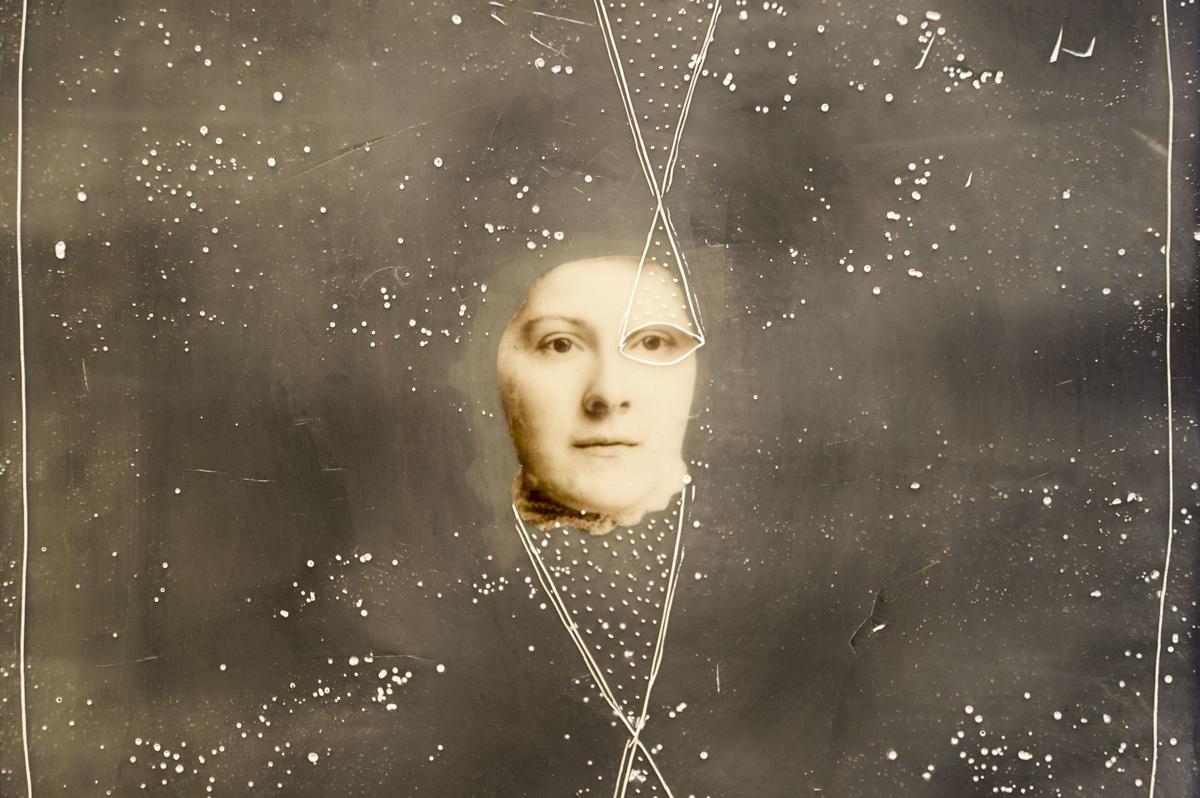 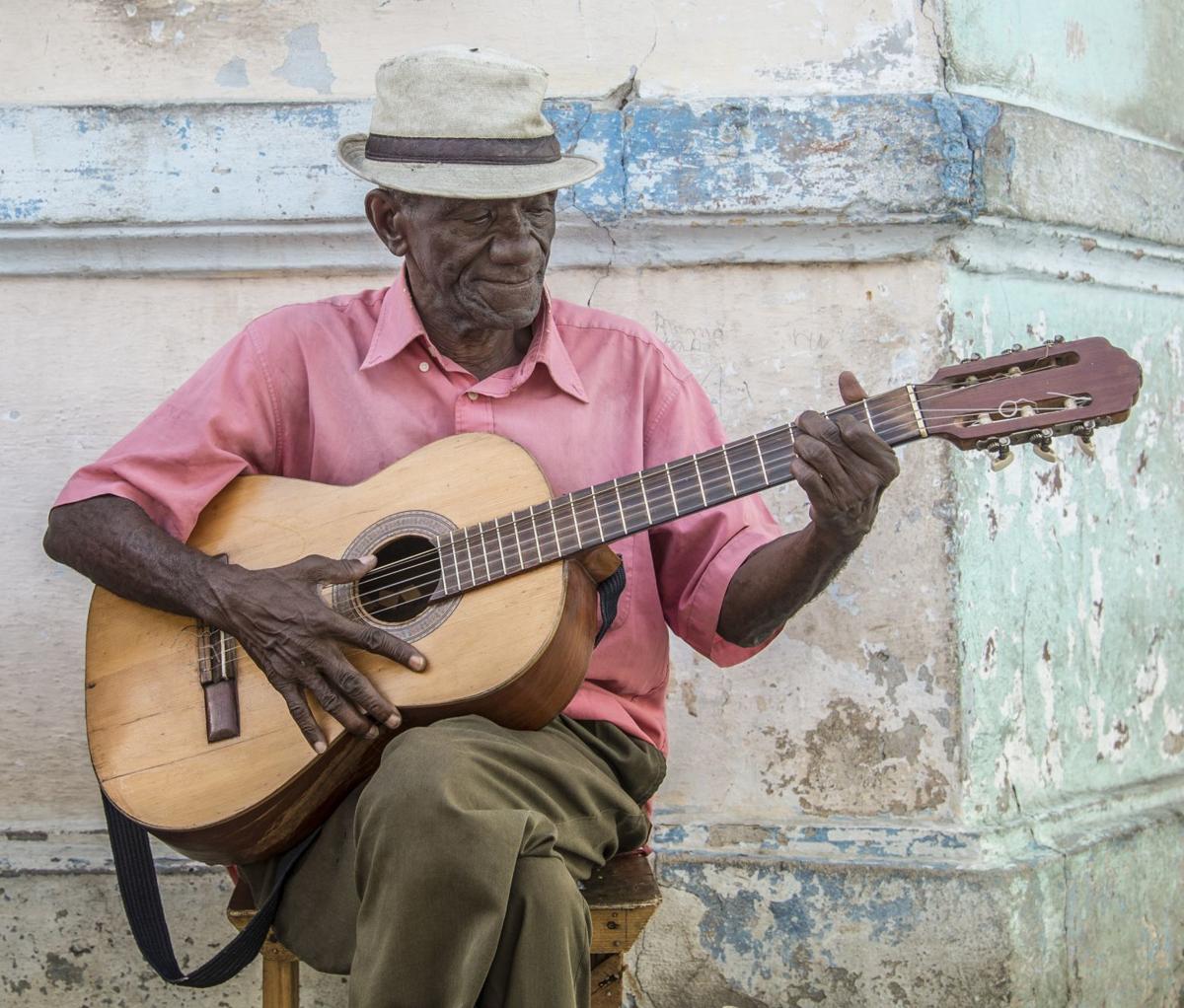 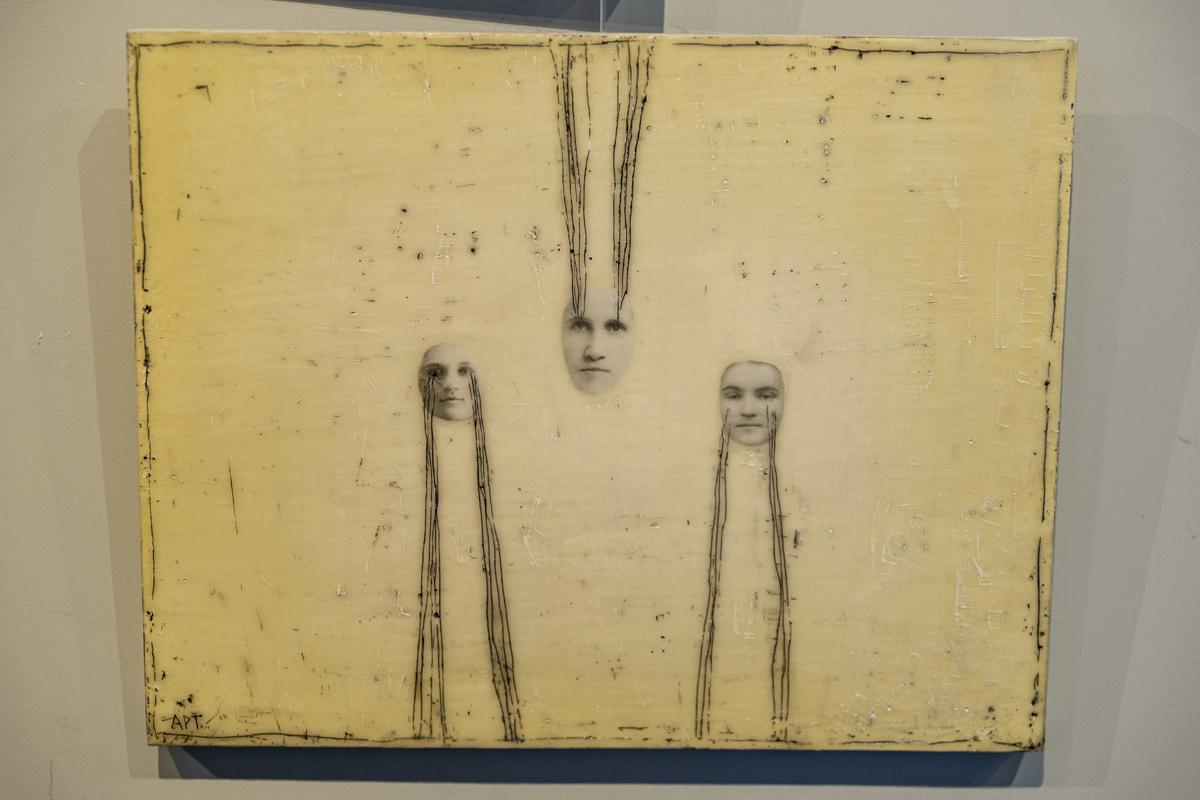 Athena Petra Tasiopoulos: “Above and Below,” encaustic medium and collage on panel. 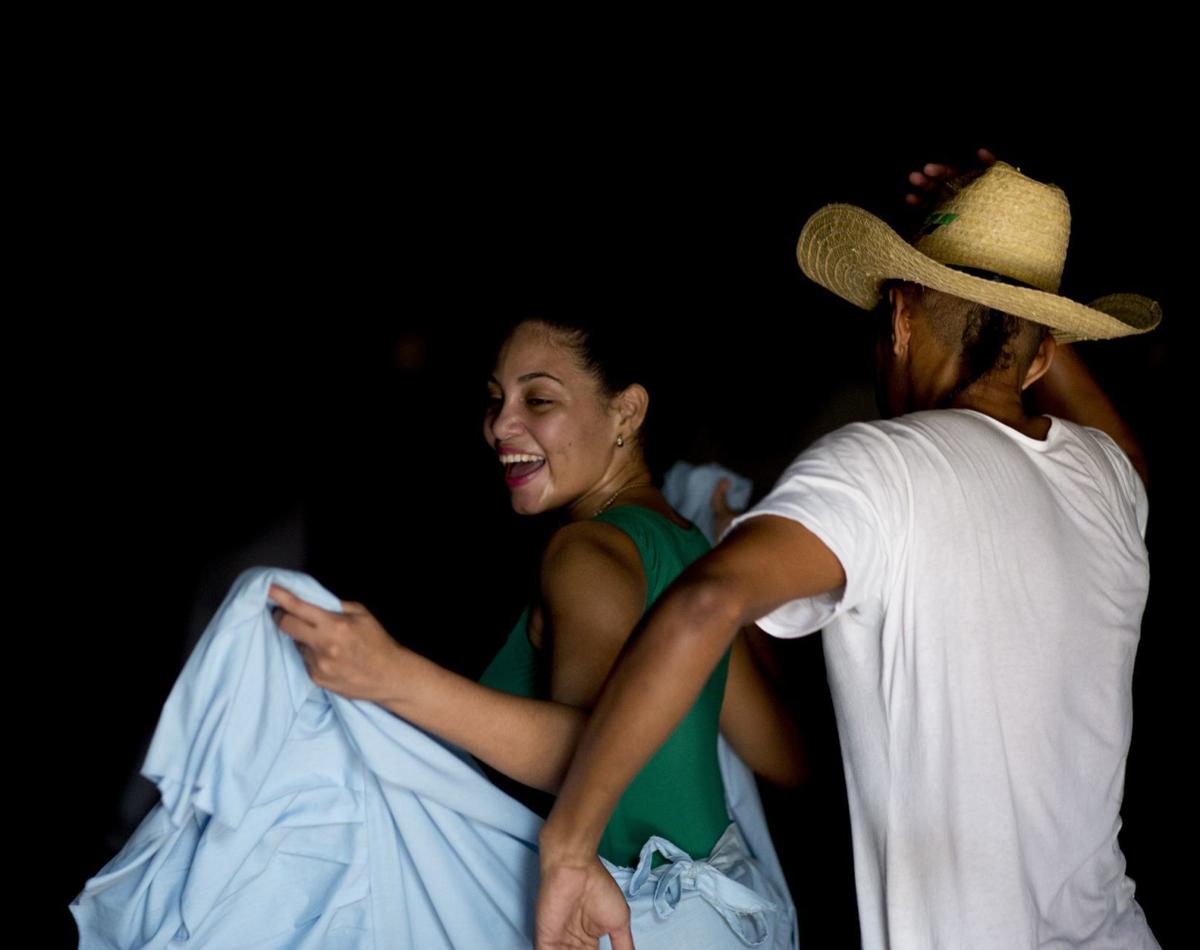 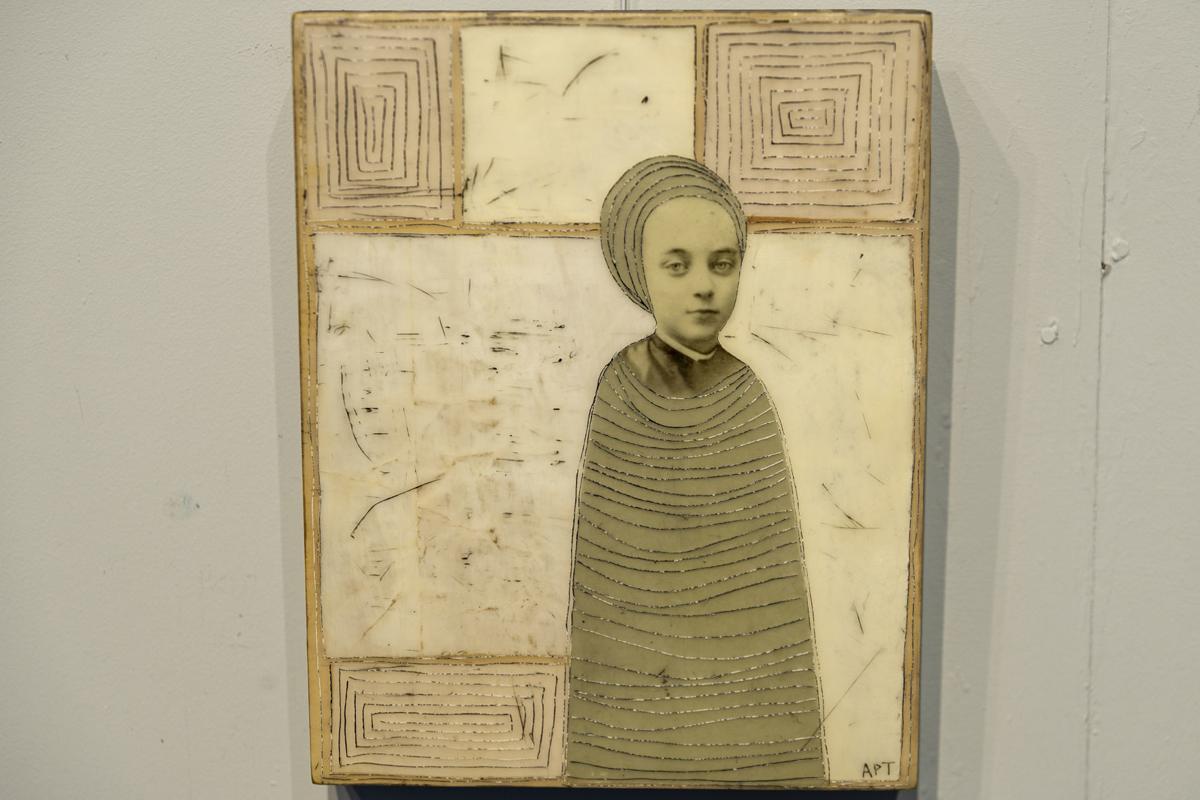 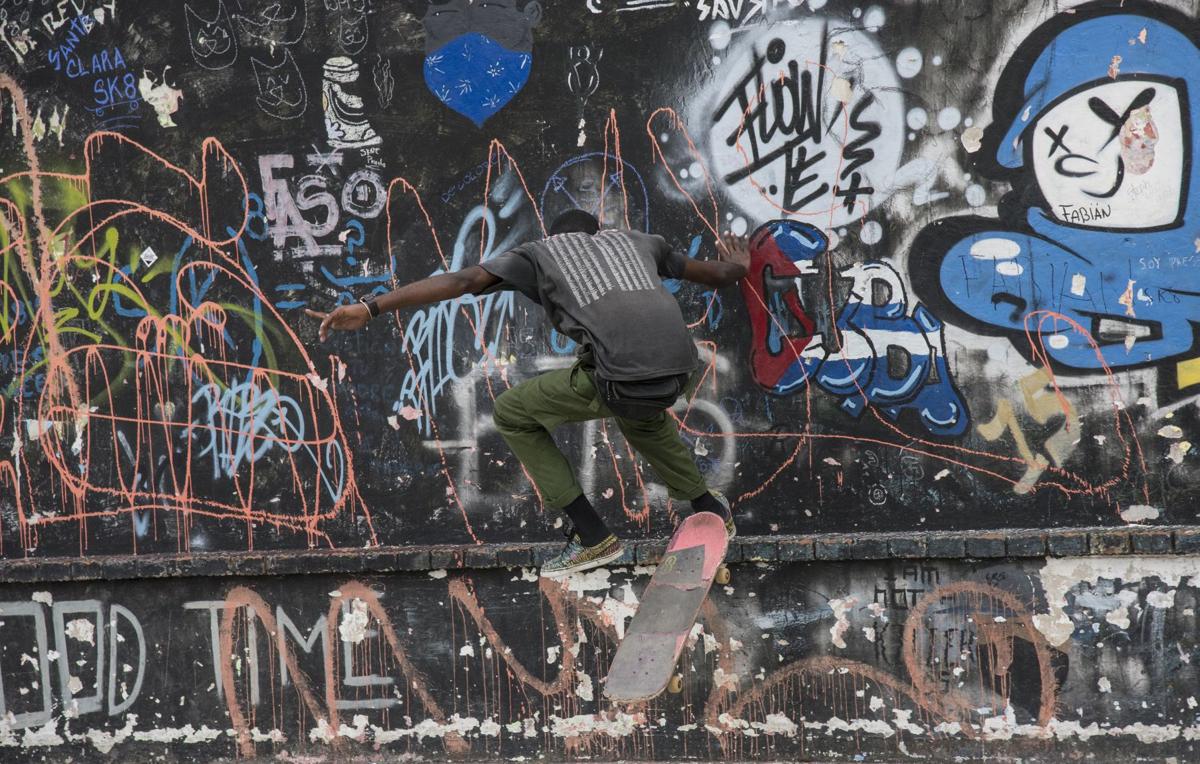 Athena Petra Tasiopoulos: “Above and Below,” encaustic medium and collage on panel.

Eyes of a girl with bangs and short hair look out at the viewer from a slightly sepia-toned photograph. The lower half of the face, also serene, is that of a different girl or woman. The halves complement each other, their direct, calm expression inviting engagement.

The photographed face, from vintage portraits, rests atop gray and tan fabric crescent-like shapes, on canvas background bound by broad stitches. The handwork and design, with the anonymous compelling face, bring together past and present in Athena Petra Tasiopoulos’s mixed-media “Ancestry.”

“I was thinking about how who we are is an evolution of all our ancestors that have come before us. We are the living histories of our ancestors,” Tasiopoulos said.

“Ancestry” is among Tasioupoulos’ mixed-media pieces in her “Faces and Figures” series, part of a new joint exhibition with Elliot Burg in the Nuquist Room of the T.W. Wood Gallery. Burg’s “Conga!” photographs combine street photography and portraiture in exploring the exuberance and culture of Cuba in 2018.

The Tasiopoulos/Burg exhibition is accompanied by the T.W. Wood’s annual Holiday Pop Up Shop of Vermont Artists in the Hallway Gallery, as well as exhibitions in the Works Progress Administration (WPA) and T.W. Wood Rooms.

Tasiopoulos began her “Faces and Figures” series about a decade ago, shortly after graduating from the Art Institute of Philadelphia, where her concentration was photography. Looking to a more hands-on approach to art making, but still involving photography, she turned to collage, specifically collage with vintage photography. She was especially drawn to cabinet card portraits.

“My imagination is continuously lured by the mystery of found photographs — ‘instant relatives’ discarded and forgotten in musty antique stores. It is as if these souls exist in an interesting sort of limbo — simultaneously trapped yet saved within the photograph. I find myself feeling compassion for them. By re-inventing the portrait, I aim to disjoint my subjects from an antiquated identity, allowing them to transcend the constraints of time and place,” Tasiopoulos says in her artist’s statement.

Transferring these vintage images to fabric and creating collages with textiles, hand stitching, sometimes soft little pompoms, Tasiopoulos bridges the time from the subject’s era to the present.

In “From Darkness,” a woman’s figure, arm gracefully raised, seems to emerge from a swath of gray canvas. The posture and juxtaposition evoke a sense of being liberated. In “Fading,” four prints of a woman’s face transition from higher contrast with richly detailed background to a faint unadorned visage, speaking to passage of time and perhaps cognitive fading.

On Burg’s first day in Havana in 2018, friend and fellow Vermont photographer David Garten took him out to get his bearings in this vivacious city. Their stops included the Teatro Campoamor, near the Capitol building. A sparkling venue for music and dance from the 1920s, the theater has been abandoned, or almost abandoned, for decades, although restoration is reportedly in the works.

One man, Reinaldo, has been living in the theater for years, caretaking it in a way — with his tenure imperiled by construction. That first day, Burg encountered Reinaldo, standing by the skeleton of a chair next to a mottled wall, with oceans of expression in his eyes.

“It was very moving to me, and set the stage for the kind of photographs I wanted to take,” Burg said.

For three weeks, Burg explored and photographed Havana, with a particular interest in Cuban music and dance.

“I wanted to take photographs that were respectful, artistic, exuberant — Havana is all about color — and diverse,” Burg said.

With photographs from a drummer’s hands to members of the Bra Rra Rra Dance Troupe in rehearsal to fishermen casting their lines in Havana Bay as cruise ships are moored in Old Havana, Burg captures the diversity and energy of the life of Havana.

“I am really drawn to people’s humanity,” Burg said.

The T.W. Wood Gallery presents Athena Petra Tasiopoulos and Elliot Burg, through Jan. 3, in the Nuquist Contemporary Room, at the museum in the Center for Arts and Learning, 46 Barre St. in Montpelier. Hours are: noon to 4 p.m. Tuesday-Saturday; admission is free (donations are welcome); call 802-262-6035, or go online to www.twwoodgallery.org.