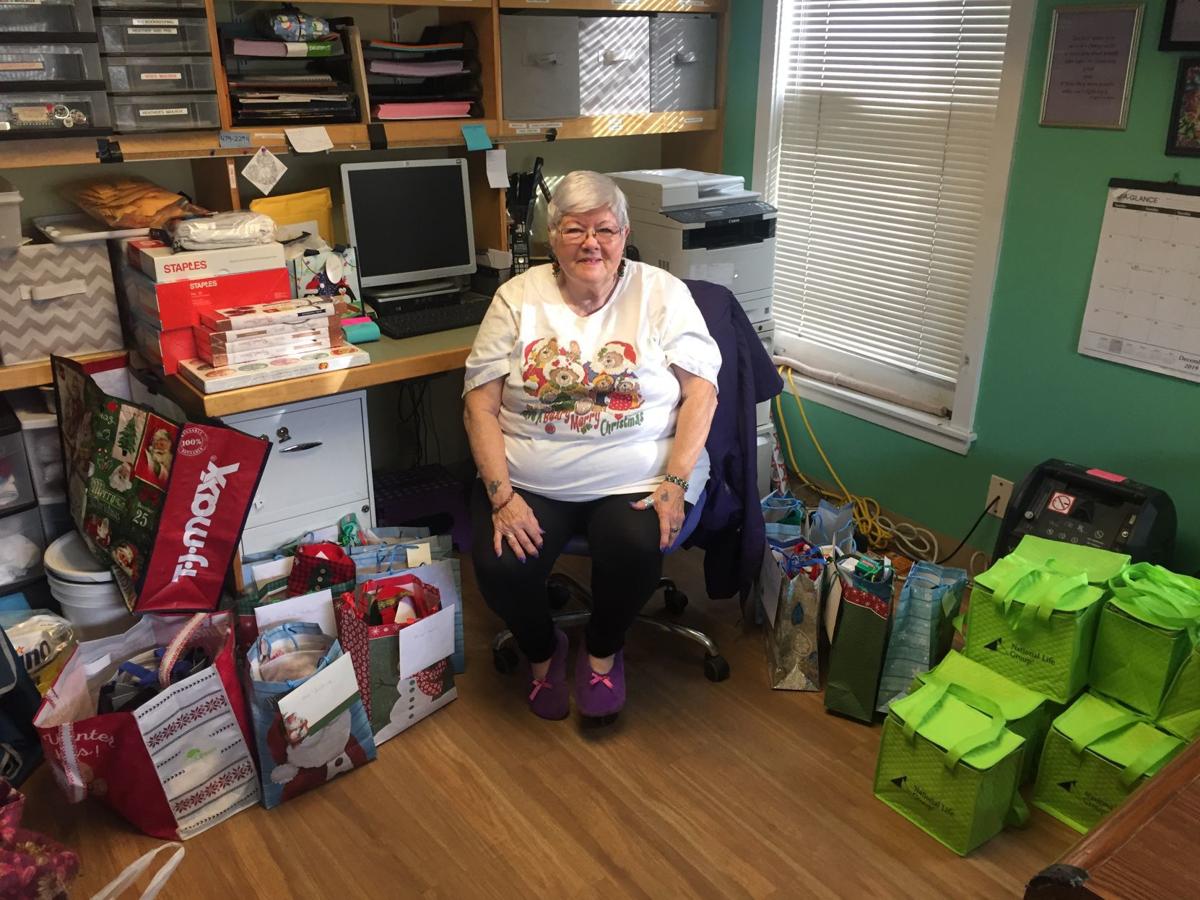 Judi Joy, manager at the Good Samaritan Haven in Barre, prepares Christmas gift bags for the homeless at the shelter. 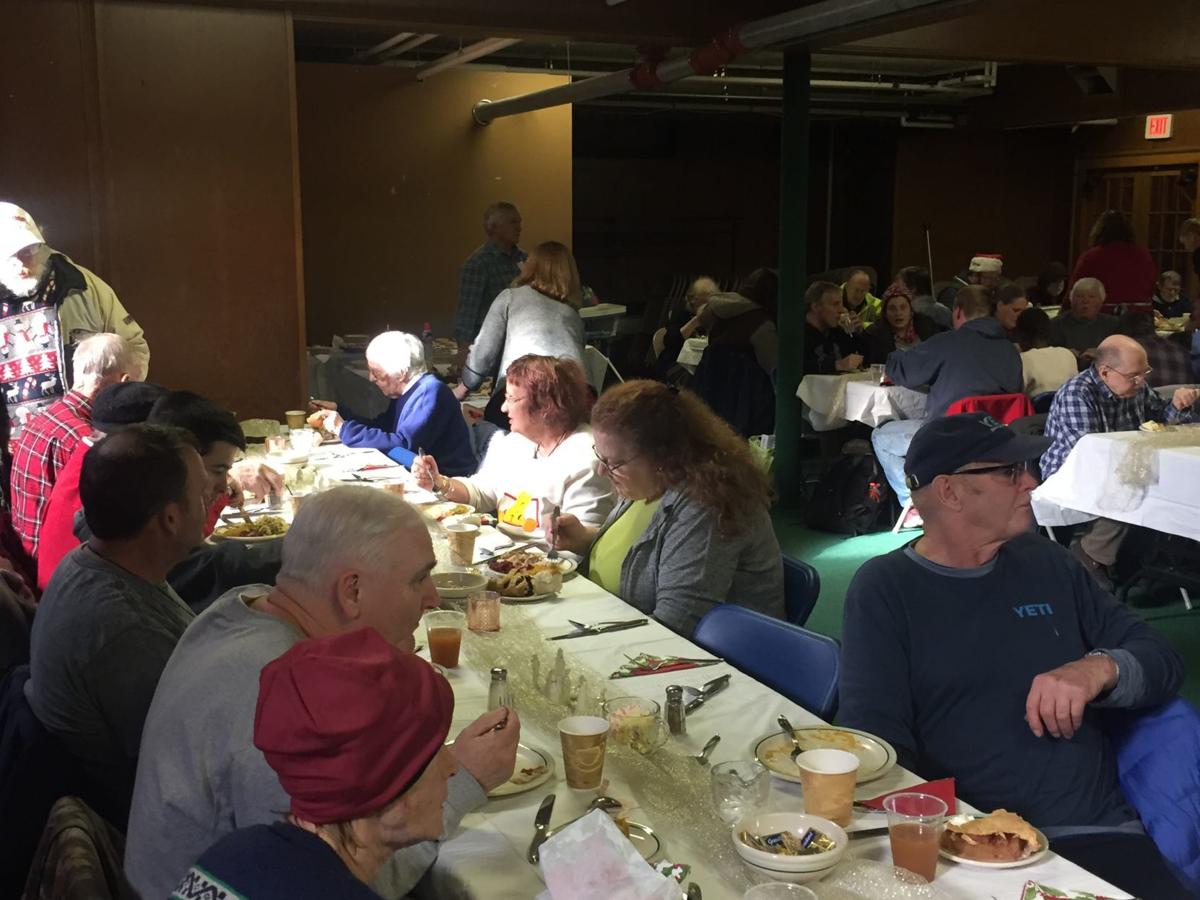 People are treated to a Christmas lunch at the Hedding United Methodist Church in Barre on Wednesday.

Judi Joy, manager at the Good Samaritan Haven in Barre, prepares Christmas gift bags for the homeless at the shelter.

People are treated to a Christmas lunch at the Hedding United Methodist Church in Barre on Wednesday.

There were plenty of food items, gifts and other support for the homeless on Christmas Day in central Vermont.

Homeless shelter officials and church leaders coordinated meals on Wednesday in Montpelier and Barre, and many of the homeless received presents as well.

In Montpelier, the homeless who spent the night at the Bethany Church overflow shelter on Main Street were treated to breakfast at Another Way on Barre Street, where the homeless were able to stay warm during the day.

Another Way supports central Vermonters who are homeless, unemployed or suffering with addiction, mental health issues and other life crises. The peer-led nonprofit helps people transition, recover and move toward a better place in their lives.

Randall Van Epps, 56, was watching a TV show after breakfast at Another Way and said he was grateful for services provided for the homeless.

“This is a day to remember things that are happy and joyful, and the new year is just around the corner,” Van Epps said.

Van Epps he was still trying to rebuild his life after several years of alcoholism and run-ins with the law that led to several bouts of prison time.

“I just said, ‘I have to give up the drinking,’ but finding a job now with my past record, especially as bad as mine, is kind of hard,” said Van Epps, who is a carpenter by trade.

The homeless in Montpelier were also treated to a Christmas lunch at Trinity Church, and in the evening, St. Augustine’s Catholic Church was open as a warming shelter and for dinner, from 5 to 8 p.m., after Another Way closed and before the Bethany Church overflow night shelter opened.

In central Vermont, the Good Samaritan Haven in Barre provides 30 beds and also runs overflow shelters at the Bethany Church in Montpelier with 20 beds, and the Hedding United Methodist Church in Barre with 14 beds.

Judi Joy, the shelter manager at Good Samaritan Haven, helped coordinate meal services and worked through much of the night Tuesday preparing gift bags for the homeless.

“We did gifts: National Life gave us all of these gift bags and we have Christmas stockings that are inside these bags that were donated by a dance troupe in Thetford,” Joy said. “In the envelopes is a $10 gift card to Dunkin’ Donuts and a $20 bill that one of our best donors gave us — she brought $600 in twenties. We are so blessed to have all the amazing donations.”

Joy said that the Good Samaritan Haven’s 30 beds were all taken, and guests were treated to a cooked breakfast when they awoke Wednesday morning.

“It was an amazing breakfast, although they cooked bacon that created smoke and caused the fire department to come at 6:30 this morning,” Joy said, adding that residents all had to leave the building for a while but were good-humored about it.

“Folks in the shelter have almost nothing, but they were so warm and loving to each other,” Joy added. “Last night, they did a gift exchange of their own and everybody had a good time.”

Good Samaritan Haven resident Darlene Spinks said she and her husband, John, were expecting a baby and that she was between three and four months pregnant. She said they were grateful to the shelter for housing them and treating them during the holiday.

“They’re doing a beautiful job making the homeless feel wanted on Christmas,” Spinks said. “They’ve spent a lot of money and time and a lot of people in the community have come together to donate and help so that people would feel the joy of the Christmas spirit.”

Between noon and 2 p.m., the Good Samaritan Haven was closed while all the guests were sent to the Hedding United Methodist Church for a Christmas lunch.

At the Hedding United Methodist Church, the basement hall was full to capacity with both the homeless and others attending a community Christmas lunch.

Pastor Rachel “Rae” Fraumann said the community outreach by the church was something that drew her to the area.

“It was once of the things that I was so excited about coming to this church for, is because it’s a church that really has a heart for the community,” Fraumann said.

Fraumann said that Sonya Spaulding, who has coordinated meal services for the church for 14 years, expected to feed 150 people at the church and also arranged home delivery meal services for about 100 people in the community that were prepared by members of the nearby First Baptist and the Barre Congregational churches.

“This is part of what we do,” Fraumann said. “We really believe that taking care of our neighbors is what we’re called to be.

“We do our Friday night suppers all year round and we have a lot of folks here (today) that we see regularly. It’s really nice to share Christmas with everybody that we love in our community,” she added.

One homeless guest, John Bergman, at the church meal said he was grateful for the support shown to the homeless and the community during Christmas.

“If you leave hungry, it’s your own fault,” Bergman said, with a laugh. “It’s great fellowship, good people.”

He said a friend asked what he was grateful for during the holiday.

“I said, ‘I’m breathing and I didn’t wake up dead — that’s a good thing,’” Bergman said. “I’ve got a full belly, and I will be able to sleep tonight because I got presents and everything else, which I didn’t get from my own family.

“These guys that I stay with are my family. I’ve adopted them and they adopted me,” he added.

Joy said that on Wednesday the homeless would be treated to a “deli dinner” of vegetable and fruit trays, cold cuts, cheeses, coleslaw and potato salads, olives and pickles, and soda.

On New Year’s Eve, Joy said the Good Samaritan Haven would have a party for the guests that would include a dinner.

On New Year’s Day, Joy said that financial donations from Credit One Bank in Barre would be matched by the Central Vermont Municipality Union to pay for dinner for the homeless.

“So, I have a $400 gift card to shop at Price Chopper,” Joy said, adding that volunteers would help to prepare the meal.