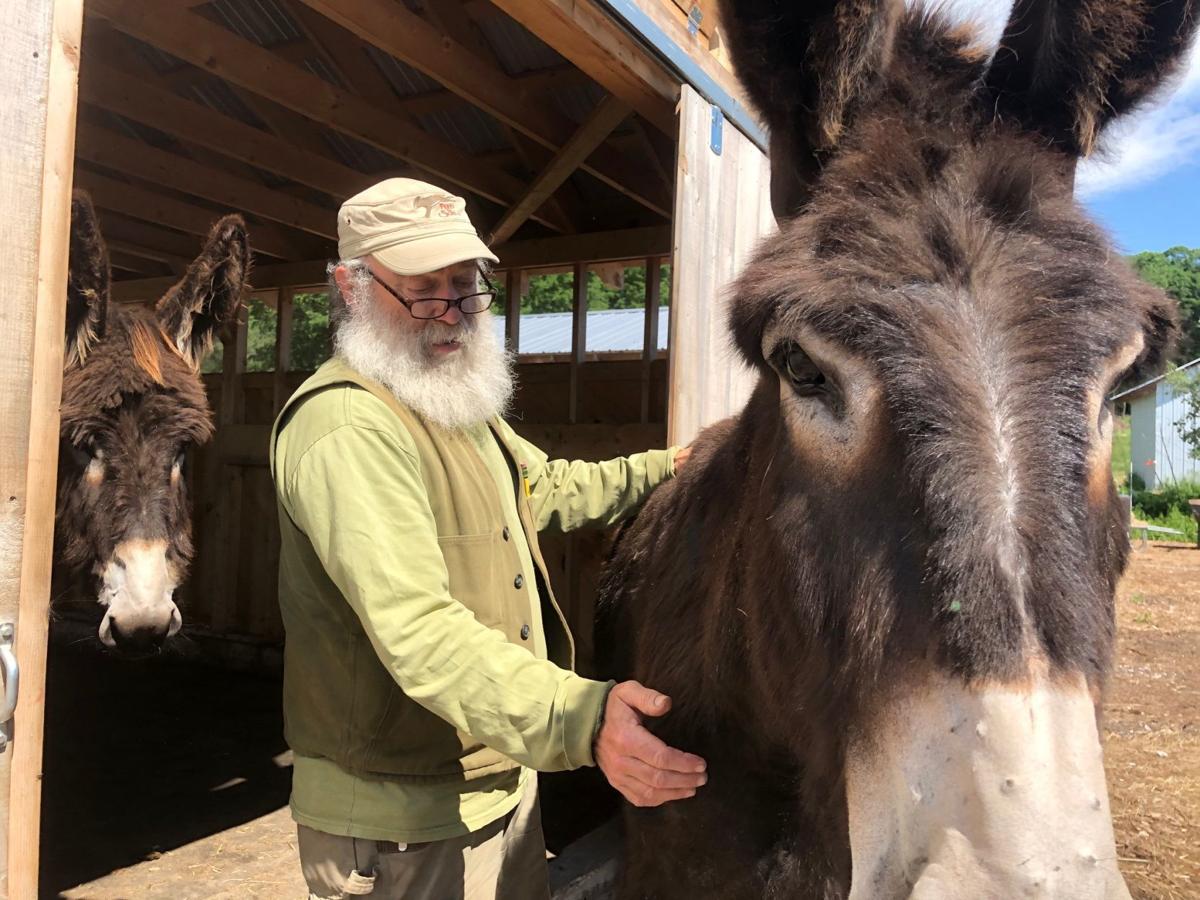 Karl Hammer of Vermont Compost has been making deliveries to the lawn-to-garden program around Montpelier using his mule-drawn cart. 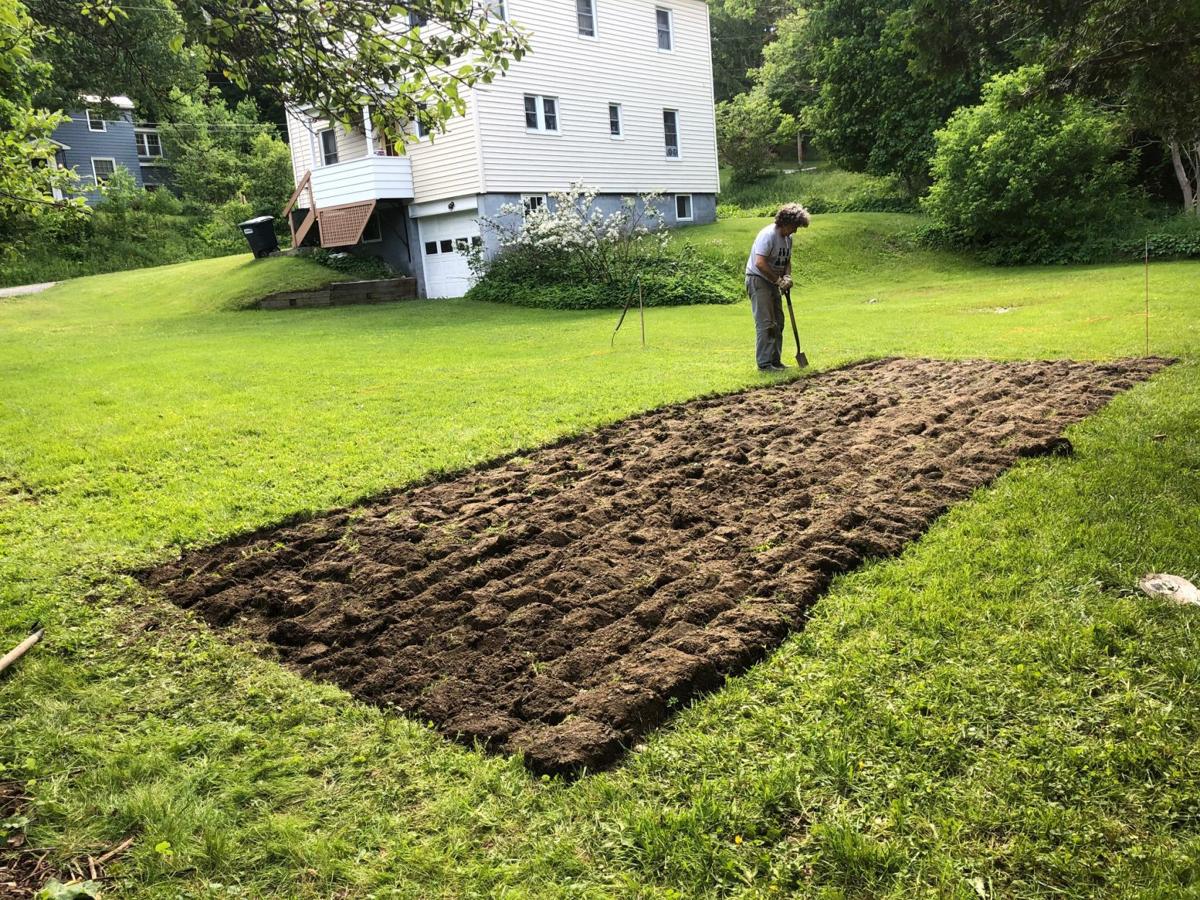 Earlier this spring, the sod was removed from this lawn on Marvin Street in Montpelier to make way for a new garden plot. 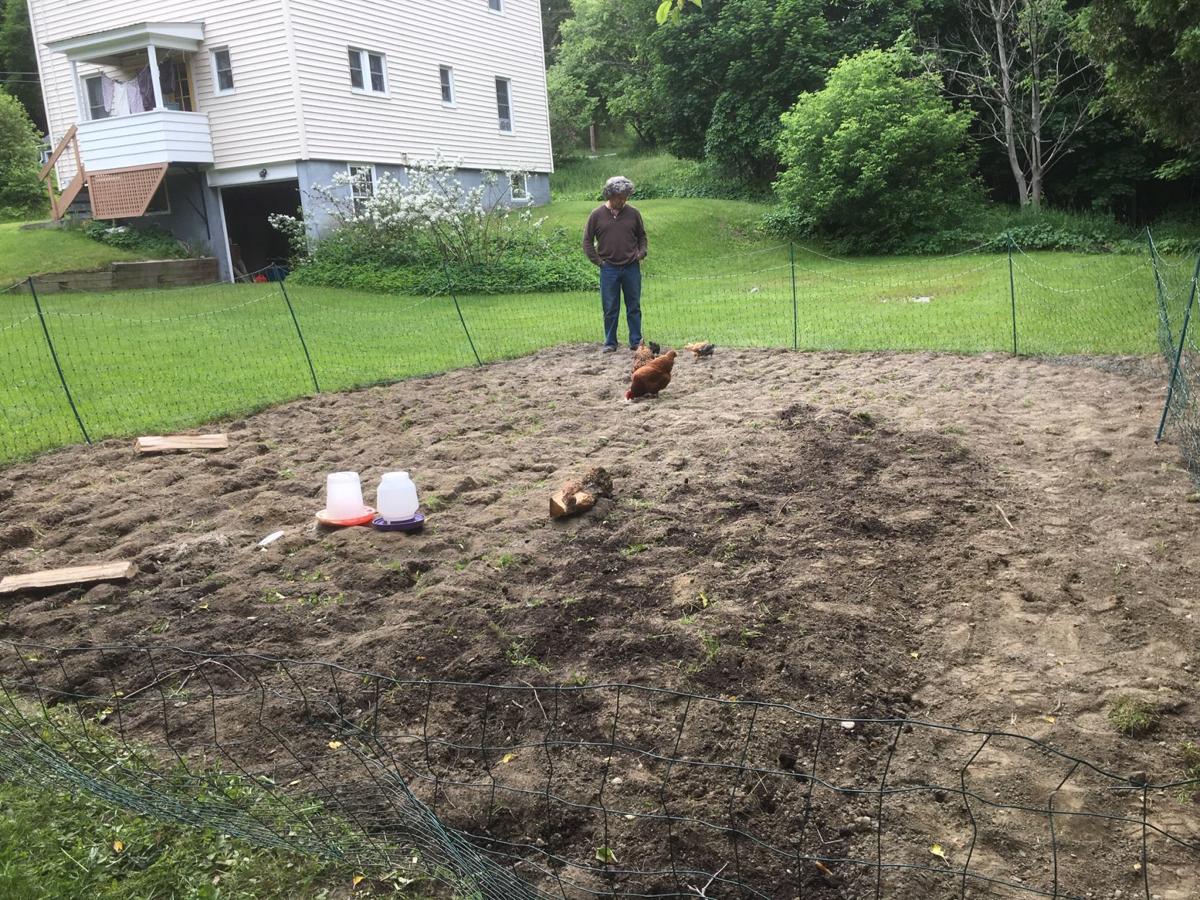 The garden plot in Montpelier was debugged and fertilized in part from some local chickens.

Karl Hammer of Vermont Compost has been making deliveries to the lawn-to-garden program around Montpelier using his mule-drawn cart.

Earlier this spring, the sod was removed from this lawn on Marvin Street in Montpelier to make way for a new garden plot.

The garden plot in Montpelier was debugged and fertilized in part from some local chickens.

On Marvin Street, Victor Guadagno broke ground this spring on a large vegetable garden. But this one isn’t in his own yard; the long-time gardener and food systems advocate put the garden on his neighbor Susan Adam’s property, a woman who is in her 90s and unable to garden for herself.

The garden produce will go to Adams and to other neighbors and volunteers, and any surplus will be donated to the local senior center.

The effort was a true community affair. A group of volunteers helped put the garden together, and donations of materials came from High Mowing Seeds in Hardwick and Vermont Compost Company in Montpelier. Seedlings came in from residents around town after Guadagno put a request for donations on Front Porch Forum.

Guadagno learned from Adams that she likes to eat green beans, squash, tomatoes and swiss chard, so that is being planted, among other vegetables like spinach. Since Adams no longer cooks for herself, volunteers will help pick, process and can some of the food for her.

“I think it’s great to get food from it,” said Adams of the new garden on her quarter-acre grassy plot. “It has been a good experience.”

This garden comes at a time when many Montpelier residents are asking, What’s more valuable? A grassy expanse of lawn, or space to grow food? In the time of COVID-19, as people witness the breaking points in our food system, an increasing number of people are putting their resources into the latter choice, says Laura Brooke, research director with the Sustainable Montpelier Coalition.

This lawns-to-gardens initiative developed from conversations within the Montpelier Food Security Coalition, a project of Sustainable Montpelier. Volunteers are working with neighborhoods in the Capital City to grow more gardens to provide food for gardeners and their vulnerable neighbors, like the elderly.

The movement is not unlike President Woodrow Wilson’s call in 1917 for increased food production, a time when Montpelier residents planted many acres of vegetable gardens and Montpelier became known as “The City of Gardens.” Now, in response to COVID-19 and the idea that Vermonters should grow more food locally, Montpelierites are once again starting to develop home and community vegetable gardens, with the idea of feeding themselves and their neighbors.

“COVID is highlighting all of our food system issues, of which food security is one, in a state where about 90% of our food comes from out of state,” says Brooke.

The Marvin Street model is one that these coalitions hope to replicate around the city. Beyond feeding people in a time of need, the plan more broadly addresses work that was already underway in Montpelier to reduce the Capitol City’s contribution to climate change. Several years ago, residents began looking at how land is used within city limits, as part of the Montpelier Energy Committee’s work to move the city toward net-zero carbon emissions by 2030.

The first initiative, explains Brooke, was for transportation partners to work on reducing the amount of land in Montpelier used for transportation, specifically parking, where 60% to 65% is used for parking cars. A design competition was held and five top choices selected by Montpelier residents have been chosen to guide the city’s efforts to reduce the number of cars in the city and think strategically about how land is used for other things like housing, food production, green space and open space.

But with the onset of COVID-19, the transportation work was put on a back burner and increasing local food production came to the forefront to address the immediate need of food insecurity.

With the help of Montpelier Mayor Anne Watson, the city reinvigorated a neighborhood model that had been in place during previous times of crisis. Using this model, about 30 volunteer representatives from each of the city’s neighborhoods took leadership roles in coordinating on-the-ground responses to the state’s shutdown as a result of the virus pandemic.

“COVID made the neighborhood model seem like an important route to go forward with,” says Brooke, “since it gave the city’s residents a way to check in with neighbors, get resources out to people in need and build relationships.”

Guadagno says Montpelier’s ability to grow more of its own food is going to depend on those relationships, just like the one he is now building with his own neighbor, Adams. Where a long fence once stood, there is a broad opening in the fence between Guadagno’s and Adams’ houses, a portal that now connects their properties and brings the neighborhood together around a common mission, to grow more food for each other.

“Rather than go way up and change the system, we are doing what we can on the ground. It’s a bottom-up approach and we’re creating replicable models,” says Guadagno. “Gardens help you recognize that you are part of the food system, you’re part of the solution.”